The Wait for ‘Chance 3′: A Compendium 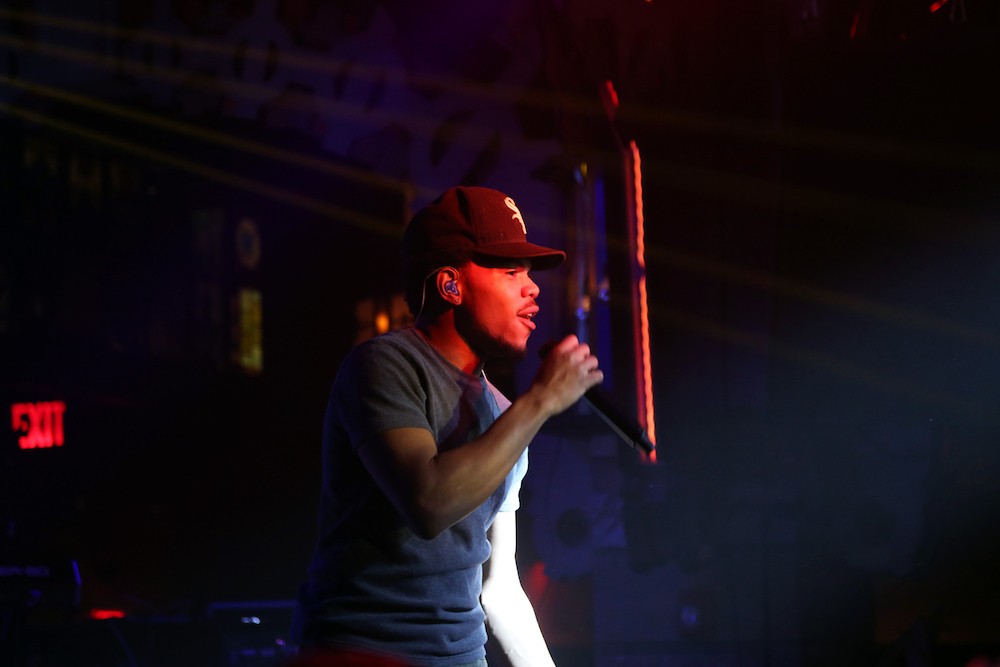 Chance the Rapper’s Acid Rap is a very, very good mixtape that catapulted him to national acclaim when it dropped on 2013. And as with most things that are very, very good, fans have been clamoring for a follow-up. But it’s been three years of misleading timetables, teased tracks, and concerts, with no solo mixtape to be found. That could change soon, though, given Chance’s recent Twitter activity. His third proper release could be a retail one à la What Time to Be Alive, but the rapper born Chancelor Bennett has pretty consistently kept his music cost-free, joking with Stephen Colbert that it’s actually a “new business model.”

To be fair, the wait for Chance 3 — the supposed title of the much-anticipated project — hasn’t been as much of a dry spell as, say, a Jay Electronica album. Surf, the Donnie Trumpet & the Social Experiment-billed project featuring heavy involvement from Chance, is one of the most infectiously joyous albums in recent memory, and then there’s all of the idyllic positivity found on his singles and loosies. He also created a moment with his verse on Kanye West’s Life of Pablo opener, “Ultralight Beam.”

Still, Chance 3 is pretty much a resumé requirement at this point: You kind of need that definitive follow-up to legitimize yourself as the rapper to beat. The quest for Acid Rap’s sequel has led us to DJ Khaled in Miami, Chance riding atop a train, and some posters going ten for $20. But what brought us here? We retraced the wait for Chance 3, starting from when Chance first announced Surf, below.

10/21 — After spending the past year and a half doing features, dropping a satirical loosie, and doing a children’s theme song cover, Chance the Rapper tells Billboard that Surf, a project featuring the Social Experiment collective, will be out by the end of the year. Although Chance makes it clear Surf isn’t the solo follow-up for Acid Rap, he does confirm that he has his “own stuff” in the works and that he’s worked with Frank Ocean (whose follow-up to his own breakthrough is also M.I.A.)

11/25  — “Sunday Candy,” the soaring Surf highlight, finally hits the web. Although Chance the Rapper is a noticeable presence, it’s billed as a Donnie Trumpet & the Social Experiment single.

1/27 — The Social Experiment unveil a short movie featuring model Cara Delevingne and the desolate “Nothing Came to Me.” Chance isn’t in the film and isn’t featured on the instrumental track, either.

1/29 — Chance the Rapper and the Social Experiment land on the cover of FADER. In the story, it’s clear that Chance’s focus is on Surf instead of his third solo project. What makes the news disappointing for some is a recent story in GQ reporting that André 3000, Frank Ocean, and J. Cole would be on Chance’s official debut studio album. The publication later posted a note from the editorial staff saying that there’s no way to confirm the supposed appearances.

4/16 — The sunshine of “Sunday Candy” gets a fittingly jubilant video.

4/28 — Although Chance and Kanye West had shown mutual admiration up to this point, they’d yet to collaborate on record. A photo of them in the studio together hints that they’ve been up to something.

“When I dream of Heaven I don’t see sharp edges”

In less speculative news, fans at a Chance the Rapper concert at Michigan State University tweet that Chance promised Surf is coming within a week. It’s a long week.

5/22 — Chance the Rapper takes a break from the Surf hype and drops “Hiatus (Broadcast),” which samples Hiatus Kaiyote’s “Fingerprints.” The release strategy is a tad unorthodox, though: Instead of simply creating a new stream and link, Chance tweets out the link to the previously released “Home Studio.” But the stream plays “Hiatus (Broadcast)” instead. This isn’t an accidental curveball; Chance said in a Harvard lecture earlier in the month that he sometimes secretly switches SoundCloud songs with different audio files.

5/28 — Donnie Trumpet & the Social Experiment surprise many by showing that you can, in fact, give out an album for free on iTunes. Surf finally drops and casts Chance as more of a featured player than a frontman. The colorful, album-by-committee project would go on to accrue 618,000 downloads in its first week.

6/13 and 6/14 — Chance the Rapper has a pretty swell weekend. On the June 13, he joins Kendrick Lamar for an impromptu freestyle with Earth, Wind & Fire at Bonnaroo. The next day, he shows up at SuperJam and covers “Juicy” and Will Smith’s “Summertime.”  No word on that solo project.

7/7 — Since 2013, Chance the Rapper had been touring “Paradise,” a jam propelled by a brass chorus and undeniable optimism. Although Chance Instagrammed a clip of the horn section recording in the studio, Chance doesn’t confirm it as an upcoming single until he talked with BBC’s DJ Semtex.

God is so Awesome. @chancetherapper and the #socialexperiment

7/14 — After his hero Kanye West showed him some love during the weekend’s Ottawa Bluesfest, Chance the Rapper goes on Windy City Live, Chicago’s WLS-TV morning show, to talk about the shoutout and buying The College Dropout. He also reveals that, yes, he’s cooking up something with West.

“You know what, we’re on Windy City Live, so let’s say yeah,” Chance says. “Me and Kanye and a lot of Chicago artists and a lot of dope artists are working on a collaborative effort that will be released tentatively.”

7/18 — Chance 3 is no closer to getting a release date, but fans at least had something else to look forward to: a collaboration with Lil B. The two reveal on their social media accounts that their totally real “freestyle album” is on the way. Cautious optimism ensues.

Made an album with Lil B

8/5 — Less than a month after the announcement, Free Based Freestyles Mixtape drops. Chance 3 still doesn’t.

8/12 — In one of the year’s underrated delights, Chance the Rapper and Windy City native Noname (formerly Noname Gypsy) trade verses on the airy “Israel (Sparring).” The tangly lyrics touch on Jacob’s altercation with God and Alonzo Harris. The wait for Chance 3 continues.

10/10 — Chance the Rapper premieres an untitled new song at Austin City Limits. The unreleased joint interpolates what sounds like “Do You Know the Muffin Man?,” continuing Chance’s affinity for childhood themes. At the end of the performance, he mutters “third mixtape.”

10/26 — In an interview with Hot 97 earlier in the week, Chance the Rapper teased that he had a collaboration coming up with late-night host Stephen Colbert. That’s only slightly true: Chance gives Colbert a halo to wear around his head as he watches the rapper perform “Angels,” which features fellow Chicagoan Saba. As if the performance isn’t joyous enough, the single is made available for free on iTunes.

11/19 — Taylor Bennett teams up with his brother Chance for “Broad Shoulders,” the title track of Tay’s upcoming debut album. The sibling duo rhymes about growing up, sharing wisdom, and the value of family. Taylor also partially dedicates the third verse to his newborn niece, Chance’s daughter. Every fan forgets about Chance’s next project because they’re too busy crying.

12/12 — Chance brings his long-developing third mixtape into the conversation again with one tweet. The hashtags imply something new is coming during his upcoming Saturday Night Live performance. And that turns out to be…

12/13 — … “Somewhere in Paradise,” the single that Chance mentioned back in July. The song, which features Chi-Town’s R. Kelly and Jeremih, drops on iTunes at midnight before Chance performs it on Saturday Night Live. (Jeremih accompanies him, R. Kelly does not.)

12/25 — During that SNL appearance, Chance also performed “Sunday Candy” and rapped, “Then the third tape slide down the chimney.” Many sensibly interpret that to mean the Acid Rain follow-up is coming on Christmas. But nothing exposes the crippling gap between reality and dreams like the holiday season. We end 2015 without a Chance solo mixtape.

The #thirdmixtape didn’t slide down the chimney. In more important news, good people raised almost $60000 in 10 days for #WarmestWinter

1/21 — Chano kicks the year off right: with another tease. This time it’s a peek at a new song through Snapchat. Here’s a sample lyric: “If one more label try to stop me/ It’s gon’ be some dread head niggas in ya lobby.”

2/3 — It turns out there is still leftover material from the one-day session that birthed Free. The free-flowing “Beautiful Chicago” — which features Keith Jenkins, formerly of the Bay Area group the Pack, alongside Lil B — makes its way onto the Internet. Basedness ensues.

2/14 — Everyone embraces the “Ultralight Beam” and forgets Chance has an overdue mixtape. He appears on Saturday Night Live to perform his verse, and The Life of Pablo hits TIDAL later that night. Chance finds space to mention his upcoming project during his revelatory verse: “He said let’s do a good-ass job with Chance 3 / I hear you, gotta sell it to snatch the Grammy.”

3/2 — Lil Wayne announces during a studio-session live stream that he has another collaboration coming up with Chance the Rapper. To this day, it still hasn’t come out yet. Best case-scenario has it on Chance 3. Worst case-scenario has it as a bonus track on Tha Carter V. Hopefully it’s the former, since the two have a 1.000 batting average when it comes to collaborating with each other.

@LilTunechi is on #LiVideo! Who else caught his live broadcast from his tour bus last night?

3/31 — Chance the Rapper hasn’t had a great history with sticking with release dates. But he’s Chance the Rapper, and people listen to him when he talks. Was he not speaking the truth in his “Ultralight Beam” verse? The end of March brings renewed hope when Chance announces “third mixtape coming next month” at the SoundCloud Go launch party. So we continue to thirst and wait.

4/7 — It’s a bird. It’s a plane. It’s not a Chance mixtape. It’s just Chance playing a superhero and spreading positivity in the video for “Angels.”

4/24 — Between Lemonade and Views, it was looking like a bad idea for Chance to drop a project in April — there’s just not enough spotlight to spread. But there are some interesting developments. The first is Jay Electronica’s hint that he has something in the chamber with Chance. ElecYarmulke also tells the Chicago rapper to not be pressured into releasing it. Knowing of Electronica’s absent discography, some fans immediately resent the advice. The tweets in question have since been deleted. (Screenshots via Pigeons & Planes)

4/27 — While the music world was gobsmacked by Beyoncé and Drake on consecutive weekends, DJ Khaled was out here grinding. Before opening up for Beyoncé in Miami, Khaled Snapchats himself shooting a music video with Chance the Rapper. Will Chance 3 be a visual album of Khaled and Chance dancing in front of a Canon camera? Let’s pray not.

DJ Khaled and Chance The Rapper were shooting a music video for a new song in Miami today 👀👀👀 pic.twitter.com/WpTB9GWa5V

4/30 — Oh joy! Chance the Rapper tweets out the cover art for his third project on the third anniversary of Acid Rap. The tweet also includes the link to a website that sells ten posters for $20.

Update 1: 5/6 — Chance goes on Twitter in the afternoon to promise “big cool things” for his appearance on The Tonight Show.

It’s not Chance 3, but we finally have a concrete release date: May 13. He also premieres the choir-backed “Blessings.”

Update 3: 5/12 —  Hark! The wait is over. Chance 3, which is officially titled Coloring Book, arrives for free on iTunes. The previously released “Angels” appears on the mixtape, but “Somewhere in Paradise” is absent. The Jay Electronica cut, “How Great,” makes an appearance despite the guest rapper’s advice to tweak it to perfection. The 14-track set also features Future, Kanye West, Young Thug, and Justin Bieber. The hip-hop world rejoices. All is well.