Tom DeLonge on Blink-182: ‘We Do Have a Future Together’

"...But for now we are busy doing separate things," the ex-Blink member wrote on Facebook 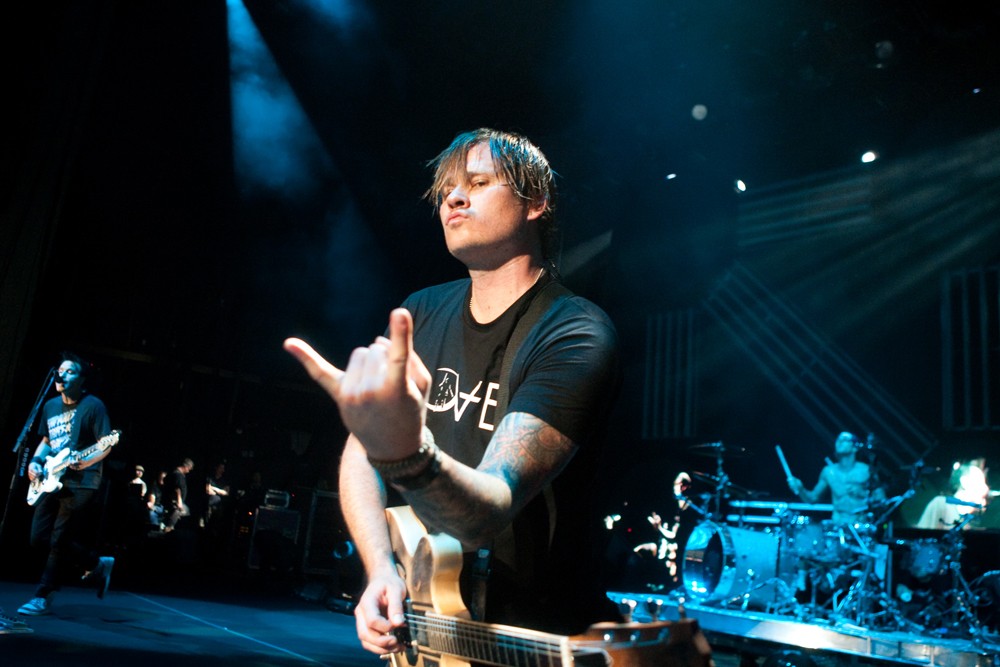 A day late, a buck short, he’s writing the report: Former Blink-182 member Tom DeLonge is laying to rest any reasonable doubts that he’s not in the band. The Angels & Airwaves frontman posted to Facebook today saying that he recently met with ex-bandmates Mark Hoppus and Travis Barker, giving further insight to his current stance in the punk-rock trio: “We DO have a future together if we want it, but for now we are busy doing separate things.”

DeLonge goes on to explain that he and Blink are in “different places in our minds, careers and goals,” but that there may be more Blink in the future, if they “can build back that ‘special something’ that was once there.”

The post comes a day after the new lineup’s first single, “Bored to Death,” along with a summer tour announcement, all with Alkaline Trio’s Matt Skiba in place of DeLonge. Earlier this week, DeLonge told Rolling Stone that he never quit or had been fired from Blink, which he’s been harping since he seemingly was kicked out of the band in January of 2015.

I understand all the craziness out there in Internet-land, it is an odd time for fans of the Blink-182 legacy, I know- It’s odd for me, too.

Well, I met with Mark yesterday, and Travis the week before…. I actually talk to Travis almost every day, now.

The answer is this:

We DO have a future together if we want it, but for now we are busy doing separate things. I am directing a movie this summer, releasing a couple more albums of music and digging deeper into my relationships with the US Government on the Sekret Machines Project.

I know people are comparing the Angels and Airwaves Chasing Shadows EP to the new Blink-182 music, and that is a failed task. We are different people after different things. For one, I think having a song-writer that came in on the Blink album (Feldy- 5 Seconds of Summer, Good Charlotte) was something they felt was necessary, and that in itself may be an indicator of some of our current artistic differences that are difficult to overcome. At the time, I was recording the song NEW WORLD (on the DEMOS album titled after my own name) and that was my personal opinion of where we could possibly take Blink for the next album. But we are at different places in our minds, careers and goals, I get it.

But that said, I obviously want them to make the music they wish. I have always been thankful for them in my life, but I am a forward thinking artist, and sometimes that leads me down a different path- That is why I have done other projects like: Box Car Racer, Angels and Airwaves- LOVE 1 & 2, AND The Dream Walker etc…

I look forward to my upcoming adventures, and a hell of a lot more…

….Maybe even a bit of Blink-182 if we can build back that “special something” that was once there.