Also, some nuns do drugs 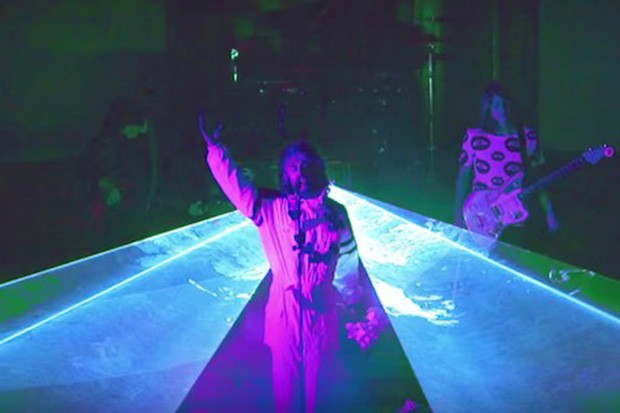 Wayne Coyne is not one for subtlety. Take, for example, his Chewbacca-themed tribute to Bowie, and it becomes easy to see that, at least when it comes to sheer theatricality, he gives even the Starman a run for his money (and when it comes to sheer irreverence, wins out). It may be a surprise then, that The Flaming Lips’ “Space Oddity” cover begins by fairly faithfully recreating the original. But just wait for where you’d normally hear “liftoff,” however, and a supersized synth hit segues into an otherwise stripped-back arrangement: the guitar drops out, and we’re left only with Coyne’s reverb-drenched vocals, a few synth pads, and an oddly electronic-sounding drum beat. A color gradient suddenly washes over the song’s accompanying video (reminiscent of the original), and we’re transported “far above the world.”

Thankfully, there’re no impertinent Star Wars references here. The video, if anything, depicts Coyne effectively eulogizing Bowie, clad in a spacey jumpsuit, presiding with lasers over a balloon-filled church as some drugged-out nuns mourn the same. Never mind the troubling fact that one of the nuns inextricably undresses in what looks like a failed Terry Richardson photoshoot: if there were ever a Flaming Lips funeral for Bowie, this would be it, and it’s actually kind of touching.