Christie & the Dream Beats, “Wasn’t My Fault” (Self-Released)
Swedish production meets steely British vocals on this modern-day answer to “Since U Been Gone.” The chorus does just the right amount of loop-de-loops, peppering in unexpected notes and key changes. The whole thing sounds like if Carrie Underwood shacked up with Max Martin for an unrepentant pop smash. Come to think of it, does anyone have their numbers? We have some connections to make. — BRENNAN CARLEY 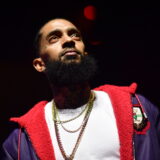 Moses Sumney, “Everlasting Sigh” (Terrible Records)
Strictly speaking, “Everlasting Sigh” is not a new song: Singer-songwriter and master loop manipulator Moses Sumney has performed it live for a couple years now. (Perhaps you saw it when he opened for Sufjan Stevens on the Carrie & Lowell tour.) But the studio version — Sumney called it “the (bedroom) studio version” — captures the full fidelity of his vocal acrobatics, arcing melodies, and gleeful la-la-las. With advanced (recording) technology, we have captured a tiny piece of the renewable energy source that powers the life-breath of the universe. — ANNA GACA

Nipsey Hussle & YG. “FDT” (Self-Released)
Any politician will tell you: Determine your most important message, and get it out there early and often. “FDT” (which does not stand for “Forget Donald Trump,” at least until the Cee Lo Remix) begins with its central platform and keeps it front and center for three minutes of sweet G-funk dissidence. “Am I trippin’, let me know / I thought all that Donald Trump bulls**it was a joke!” spits an understandably incredulous Nipsey, before the track samples the Donald’s own infamous “I will build a great, great wall” speech, as if to confirm Yep This Actually Happened. Nipsey and YG’s three-word screed might lack the grace and uplift of Kendrick Lamar’s de facto 2015 rallying cry, but in 2016, we can’t afford to be much subtler or more elegant than this. — ANDREW UNTERBERGER

Nosaj Thing, “N R 2” (Innovative Leisure)
When he’s not working with Kendrick Lamar or Chance the Rapper, Los Angeles-based producer Nosaj Thing sculpts cloudy instrumental landscapes of drugged-up tempos and pitched-down vocal samples, corralling ephemeral sounds into rhythm and techno-soul. In a statement, Nosaj Thing said his forthcoming EP, No Reality, was written on an iPad with a tight turnaround. While “N R 2” is certainly more functional than his past three “more personal” albums — with its steady pulse and vertigo-inducing cascades of melodic haze — it’s no less immersive. — HARLEY BROWN

Psychic Ills feat. Hope Sandoval, “I Don’t Mind” (Sacred Bones Records)
Brooklyn’s Psychic Ills made quite the splash this week by looping dream-pop mainstay Hope Sandoval into their first single since 2013’s One Track Mind. Set to appear on the duo’s forthcoming fifth album, Inner Journey Out (coming on June 3), “I Don’t Mind” trades the band’s favored distortion for gentle acoustic strums and a Southern-twanged steel guitar. Meanwhile, frontman Tres Warren and Sandoval’s tranquil voices float across each other, creating the impression that they could deal with any piece of bad news — even if Warren really “would rather not know.” — RACHEL BRODSKY

Told Slant, “Low Hymnal” (Double Double Whammy)
Felix Walworth’s voice is subdued and fragile in the way that your best friend’s is when they tell you a secret. There’s a self-conscious vulnerability there, but any hesitation is won over by a sense of camaraderie — one that makes it OK to lower your defenses. Walworth sings for the world to hear, though, and their new song as Told Slant, “Low Hymnal,” is a one-sided conversation. You almost feel guilty for listening to it; it’s tantamount to reading Walworth’s diary and providing nothing in return. — EVAN SIEGEL