The Last Shadow Puppets: Everything That You’ve Come to Expect — and a Little Less

Up close and a little too personal with the U.K. orch-rock duo 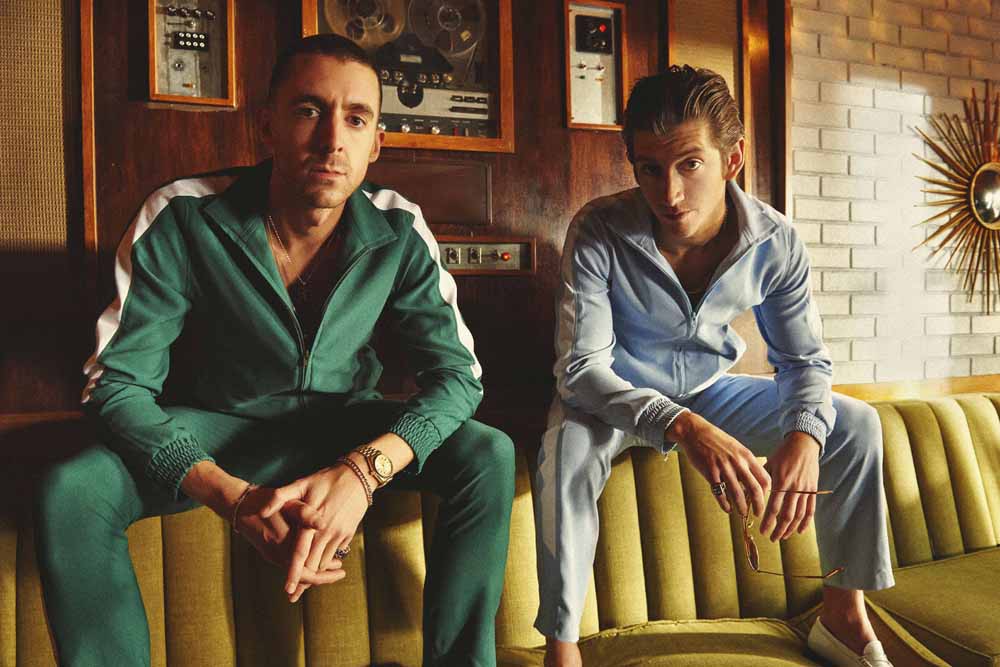 The Last Shadow Puppets are exhausted. Splayed on a couch in the lobby of Manhattan’s Bowery Hotel, Alex Turner and Miles Kane resemble a couple of loopy 2-year-olds being rounded up for bedtime. But you wouldn’t know how wrecked they are at first glance — both are styled to the nines in various patterns, textures, and shiny jewelry. “Butter me, butter me!” Kane giggles when I tell them that I’m not even trying to butter them up by complimenting their outfits — they look that good.

Turner, who leads the officially on-hiatus rock troupe Arctic Monkeys, has slicked his famous rockabilly pompadour back and is sporting a slightly unbuttoned black shirt, a Saturday Night Fever-ish gold chain, and tight parakeet-colored trousers. Kane’s wearing a leather blazer and tiger-printed silk shirt. Both have an array of chunky rings dotting their knuckles. Looking over at his manspreading counterpart, Kane gleefully points at Turner’s exposed bulge. Not wanting to be rude, I look away.

In town promoting their forthcoming sophomore record, Everything You’ve Come to Expect (dropping on April 1 via Domino), they’ve earned the right to feel squeezed dry after a day of talking to writers like me and posing for photo shoots. I roll with the mood. Kane, 29, and Turner, 30, are more or less game to focus on my questions — even more so once a tray of coffee, cookies, and hot chocolate arrives. Kane asks for an extra mug and pours me a serving of cocoa. “Warm yer bones!” he says with an exaggerated accent. It’s one of his many off-the-cuff asides; Kane tends to show his enthusiasm by speaking in loud, cartoonish tones and peppering the conversation with a series of one-handed (then double-handed) high-fives.

Turner initially became friends with his partner when Kane’s old band(s), the Little Flames and later the Rascals, opened for the Arctic Monkeys in 2007. Bonding over a mutual love of baroque-pop brooder Scott Walker, they formally teamed up that same year to record 2008’s The Age of the Understatement. The result was an idyllic love letter with Walker-esque string arrangements, dramatic vocal harmonies, and a reverberating psychedelic touch. Audiences responded enthusiastically; Understatement entered the U.K. Album Chart at No. 1 and was nominated for the 2008 Mercury Music Prize. Now, a few years later, Turner’s more composed than his counterpart and therefore more prepared to discuss the pair’s second album. He talks about writing Everything with Kane in three different cities — London and Paris, but mainly Los Angeles, where he’s been living now for three years. Kane, meanwhile, relocated to the West Coast from London just six months ago.

It turns out that the first Everything track the duo wrote together, an ominous song called “Aviation,” was originally meant to be a solo song for Kane, who left the Rascals in 2009. Upon working together again in 2014, Kane and Turner felt so inspired that they just went ahead and revamped the Last Shadow Puppets after leaving the project dormant for several years. “Something about [“Aviation”] seemed particularly ‘Puppety,'” says Kane. “So we eventually convinced [Simian Mobile Disco’s] James Ford, the producer, to come do it again.”

The Last Shadow Puppets also brought back string arranger Owen Pallett and bassist Zachary Dawes from Mini Mansions, with whom they’d worked on Understatement. Though they still favor heavy string use, Turner cared less this time about writing lyrics as he would in a diary. Many of the songs on their debut moodily address double-crossing lovers (“Only the Truth”) and emotional repression (“Calm Like You”), but Everything feels more lighthearted, carefree, even silly at times. (“Goosebump soup and Honey Pie / Piggy in the middle, I’m the baddy’s daddy,” they sing on the album’s title track.) Turner says that the change in tone is intentional. “When we did the first record, we considered the lyrics another component along with the melody,” he says. “[This time] I wasn’t so concerned about always telling a story.”

They don’t just have little to say on Everything — they also don’t have much to say about the record. They’re tired — yes, yes, I know that they’re tired. I’m aware because not only have they said it repeatedly, but the moment they run out of things things to say, Kane and Turner immediately devolve into a sort of secret language, like best-friend side chatter. In order to keep the conversation running, I try engaging in a little small talk.

“So, what else are you guys doing today?”

“Do you want to go upstairs?” Kane asks.

“No,” I respond, laughing nervously.

The boys’ publicist snaps to attention: “I did warn you when you arrived that they were on kind of a downward spiral.”

I laugh along despite feeling unnerved. It’s growing clearer that I’m caught in an increasingly distasteful situation. If I wasn’t on a professional assignment, I would tell him where he could go instead of “upstairs.” But because I am working, my brain races for another superficial conversation topic without letting on that I’m upset. So I end up rambling about the time I attended a Dead Weather listening party in the same New York neighborhood and watched Jack White chain-smoke cigarettes in a windowless basement. “Ooh! Don’t you miss the White Stripes?” asks Kane. “I do. I f**king miss ‘em. I really do. Maybe my favorite band of all time. Like, that was the reason I play guitar.”

Sensing an upswing, I keep the band talk going. “At SPIN we have an ongoing debate over who’s better, Oasis or Blur. Do you guys have a preference?”

“Yeah, I like both,” Kane responds. “Probably when I was younger I preferred Oasis a bit more. Do you know what I mean?”

Kane looks into my eyes as though he would really like me to be with him on that. I feel my gut lurch and I glance to the side again.

The interview eventually comes to its natural conclusion, but I may also have unconsciously wanted to wrap things up early in the interest of standing up and walking out. Turner gives me a nice handshake goodbye. When I extend my hand to Kane, he yanks me in for a not-entirely consensual kiss on the cheek.

As I walk away, I try to suppress my ballooning sense that something wasn’t right back there. Is it normal to be asked up to a male musician’s room — even as a joke? Or cheek-kissed, repeatedly high-fived, and stared down? Even if he’s entirely harmless (and I’m sure that he is), is this the sort of thing that I should let go for the sake of my job?

I spent the rest of the week thinking about the inherent professionalism gap between journalists and artists and how women are especially vulnerable. It’s something I’ve thought about on and off, usually when I run into situations like these. But this issue feels more prevalent than ever right now, arguably due to the recent allegations about Heathcliff Berru, a well-known music publicist who recently stepped down as CEO of his company, Life or Death, after more than seven women in the industry came forward accusing him of sexual harassment. I’ve also been considering the fundamental push-pull that occurs when writers — and especially people-pleasers like myself — have to navigate discomfort while being mindful of business relationships.

As I recounted the exchange with Kane to friends, co-workers, and my fiancé, I witnessed a spectrum of reactions: Some people twisted their faces in disdain and said stuff about lines being crossed. Others looked annoyed but shrugged it off with one word: bands.

Bands will be bands. Boys will be boys. Women years deep into their music careers have thrown this just-put-up-with-it rationale at me, and it has not been isolated to this one experience. In total honesty, I’m still grappling with how to feel about an interview that takes this undesirable direction. Plenty of people in my position will chalk this up to the occasional occupational hazard, not all that far removed from waking up hungover on a weekday after a late-night show. But the more just-kidding-but-not-really come-ons I absorb, the more I understand that unlike getting too sloshed at a show, this particular hazard is mostly limited to one gender. Case in point, when I told male colleagues about the interview, all of them observed that unwanted touching and flirting was simply not something they worried about when talking to subjects. Because it hardly ever happened.

This is not about the Last Shadow Puppets. This is about the ongoing culture of imbalance, be it writers catering to famous musicians, women catering to men, or women catering to society’s conciliatory expectations. In previous years, I would repeatedly let men disregard my personal comfort because I was afraid of not being “nice.” For the bulk of my teens and 20s, it had never even occurred to me that there was another way to be. Because of how I thought I should handle conflict — which is to say, too delicately or not at all — I let ex-boyfriends contact me for months, I put up with strangers on the subway interrupting my reading for unwanted chats, and I’ve let men approach me at festivals, then proceed to follow me around for another hour when I didn’t want them to. But after spending a few years in the industry and a lot of money sitting on the therapist’s couch, I’ve managed to break down a lot of those conflict-averse barriers and recognize how I was — and how a lot of other women were — socialized to let my own feelings slide.

Maybe there’s nothing else especially revelatory that I can add to the conversation — and lord knows there’s a conversation at the moment. But I can be frank about what really occurred during an interview instead of trying to sugarcoat it, ignore my gut, and forget about it until it happens again.

Something I did not expect was for Kane to find out that I’d felt uncomfortable with his meant-to-be-funny advances. But he did, and a few days later sent me the following:

I really enjoyed chatting to you about the new record. I am just very sorry that silly remarks I made during our interview have caused offence. I recognise my ‘Carry On’ humour during the interview was ill judged and I am mortified that it made you feel uncomfortable. Please accept my sincere apologies.

I appreciate Kane’s note, but it doesn’t make me feel better. It certainly didn’t erase that afternoon or the other times I’ve felt objectified on the job. Notes like it don’t change the events that preceded them. Instead of apologies, I’d like to see a little more foresight and a lot more professionalism toward women in the music industry.