Underworld‘s transcendent Barbara Barbara, we face a shining future arrives in one of those windows of release-date alignments with anniversaries that further confirms the cyclical nature of music trends every 20-ish years  (along with fashion and designer drugs) — in this case, what was dubbed “electronica” in the mid-’90s. In 2014, the U.K. festival vanguards reissued their 1993 rave-rock reinvention, Dubnobasswithmyheadman, followed a year later by a comprehensive re-release of its staggering follow-up, 1996’s Second Toughest in the Infants. Karl Hyde and Rick Smith’s peers from that era are right there with them: Last year, ambient househeads the Orb unveiled their 13th conceptual odyssey, Moonbuilding 2703, and O.G. electro-bros the Chemical Brothers became Born (again) In the Echoes; later this year, beatwise psychonauts Primal Scream are set to unveil their latest tripped-out exercise, Chaosmosis, while the Prodigy will return to headline Miami’s Ultra Music Festival.

Despite a few good-natured jaunts down memory lane and a spectacular Dubnobass anniversary live show last year, Hyde and Smith appeared to have no interest in revisiting the past on their ninth studio LP. “This record feels like it wiped the slate clean for a while and if you had no history what record would you make,” Hyde told Billboard. Indeed, on Barbara Barbara — the title being a phrase Smith’s father said to his mother shortly before his passing, about as literal a reference to death and rebirth you can get — they’re so determined to leave the past behind it’s almost ouroborotic. On “If Rah,” the notoriously arch Hyde’s heavily reverbed tongue-lashings (“Manhattan swoons!”) are unavoidably reminiscent of James Murphy, whose searing intonation in turn owes a good deal to the Underworld sing-speak-shouter’s. At other points, they sound positively radiant, as on “Low Burn,” a New Age-y tribal dance of symphonic strings and rounds of hypnotic didgeridoo notes beneath Hyde’s dazed non-sequiturs (“First time!” “Beautiful!” “Free!”).

That wide-eyed sense of possibility implicit in the title and in high-wattage moments like those is what differentiates Barbara Barbara from the rest of Underworld’s spotty catalog — like the ’80s-skin-shedding Dubnobass, it’s an inspired record born from the desperation of years-long stagnancy. Skeletal opening banger “I Exhale” and the galloping awe of “Nylon Strung” elegantly bookend the seven-track LP, fresh updates on widescreen electronic music that existed before EDM and progressive house were the only two dance genres that could fill arenas. The latter especially rings of hope for the coming years: Its stirring background vocals over ever-turning arpeggiated synths are provided by Smith’s daughter, Esme, and Hyde’s daughter, Tyler, carrying the torch (almost literally) for future ravers. “I Exhale” is a bit more aggro, with its jagged skitter as Hyde slams into the door jamb and practices some light freehand raving, as if trying to prove he can keep up with the kids and still managing to catch you off-guard.

Not even Underworld’s decades-long stamina can prevent Barbara Barbara‘s second half from drifting a little. Sampled radio static and flamenco guitars roam the mystical, beatless expanse of “Santiago Cuatro,” and the lethargic half-time of “Motorhome” sounds like the byproduct of an ayahuasca trip at a UFOs Are Real rave in ’90s-era San Francisco. They’re not unwelcome intrusions. “Santiago” is thoroughly soothing, albeit completely unrecognizable as an Underworld song. “Motorhome” is less successful with Hyde and Smith throwing things against the wall and seeing what sticks: Rhodes organs, murmuring ohms, and psychedelic bagpipes. It’s just a little too much going on at once, and meanders without the rest of Barbara Barbara‘s clarity of vision. But hey, everyone needs a chill-out room at even the best raves. 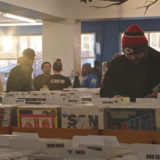 With children in tow, Underworld’s forward momentum may lead to another immediate follow-up to Barbara comparable to Second Toughest — or it may be another six years until the duo put out an unworthy successor, or another 20 before the whole U.K. crew of ’90s electronic pioneers’ planets align once again. That “shining future” might be their golden years, but at least Hyde and Smith prove they still have the Midas touch.

Album of the Week, review, underworld