Review: Santigold Sells Herself Short on ’99¢’

Few pop stars know more about the trials of consumerism than Santi White, a.k.a. Santigold. She began her career in the ’90s as an A&R rep for major-label behemoth Epic but jumped across the aisle in the early ’00s to perform in indie-punk outfit Stiffed. Her genre-bending 2008 debut heavily addressed the creative underclass (“L.E.S. Artistes,” “Shove It”), but its success led her to contribute a song called “Shooting Arrows at the Sky” to the soundtrack for box-office juggernaut Hunger Games: Catching Fire. She’s also been a high-end fashion muse, designing makeup for Smashbox and modeling for T by Alexander Wang. She’s worked in more areas of the industry than Jay Z, Madonna, and No Age combined.

Now she’s addressing said commodification on her third LP, 99¢, an album which comes complete with artwork of her sealed in plastic alongside little doll accessories like a keyboard and mic. In addition to her purposefully cluttered, installation-looking album art, White filmed a tongue-in-cheek “Chasing Shadows” infomercial advertising the “Shadow Eraser Cream and Mask,” a Jason-looking face cover that promises to help you “regain the confidence to sell yourself to the world.” These colorful marketing tactics definitely succeed in making us interested in her thoughts on the problematic art vs. commerce debate — but the music itself sounds a little more factory-made than White may have intended.

It’s not like she doesn’t understand the inherent paradox of her position — lampooning consumerism while blatantly participating in it. “It would be great if I could bust through and open those doors up [i.e., get heavy radio play], you know, but the reality is, I make a lot of my money from licensing and touring, and that’s how I make a living, especially since people are not buying music anymore,” she told Pitchfork last November. But any potency her message had isn’t serviced by the uneven quality of its carriers. 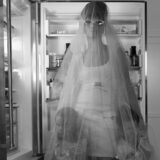 After the reggae-flecked romp “Can’t Get Enough of Myself” and the exhilarating pop of “Banshee,” 99¢‘s energy wilts pretty quickly — when White lets iLoveMakonnen upstage her on “Who Be Lovin’ Me,” she ends up sounding like a guest on her own track. Fortunately, with every valley comes an eventual peak; the “Take on Me”-sounding “Rendezvous Girl” lifts off from White rocketing through social events (“They call me the rendezvous girl / Got more power in my calendar / Than the queen herself”). When White takes the time to buff a melody until it shines, her irreverence reflects clearly back at us.

Maybe the most unsatisfying aspect of White’s trajectory is remembering what a strong, imaginatively diverse note she started on with her self-titled debut. Santogold was an anomalous product of its time — most, if not all, of those songs will forever be inextricably linked with the year 2008, not because they don’t hold up, but because of sheer ubiquity. Of course they were everywhere — practically every track on Santogold boasts a markedly different yet complementary sound by flirting with electronic and dub (“Starstruck”), rock (“You’ll Find a Way”), and glittering, crossover pop (“Lights Out”).

Her much-delayed follow-up, 2012’s Master of My Make-Believe, gave White’s co-writer and sometime bandmate John Hill less of a role and employed a series of A-list producers (Diplo again, Q-Tip, and TV on the Radio’s Dave Sitek among them), inadvertently narrowing its aesthetic with sanitized but nonetheless enjoyable cuts more suited for the club than the debut’s songs were. This time, predictably, she’s got the production class of ’16 behind the boards: Swedish pop prince Patrik Berger, ex-Vampire Weekender Rostam Batmanglij, Hit-Boy, HazeBanga, Justin Raisen — plus John Hill and Dave Sitek again for good measure. Corralling these names was savvy on White’s part, but their presence alone doesn’t guarantee their A-game, especially when she’s not in peak form herself. There’s no shortage of talented artists who’ve commented on consumerism — just try X-Ray Spex or Neil Young’s infamous “This Note’s for You” — but 99¢ simply doesn’t live up to the “Creator”‘s standards. It just sounds lost in the mall.