Review: Loretta Lynn May Have Come ‘Full Circle’ But She Ain’t Done Yet 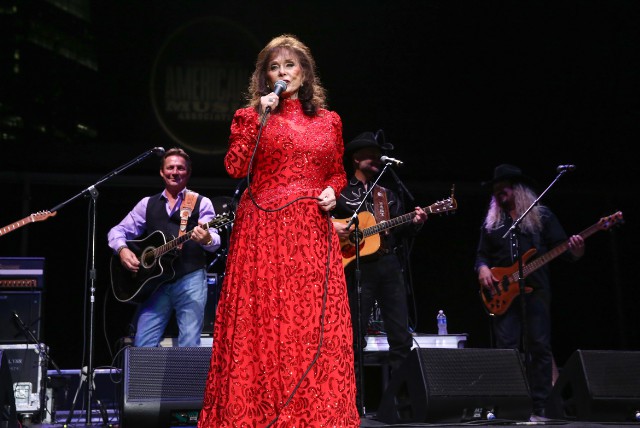 For most legendary artists, there comes a point when the past eclipses the future. It’s a time for reissues of classic albums, for B-sides and rarities collections, for the cleaning out of musical closets at the urging of loyal fanatics who never stop wanting more. At best, these releases add nuance to already rich catalogs, providing greater context for defining works from our most important artists. At worst, they feel cheap, serving as last-ditch grabs for relevancy (or cash) from artists who just can’t crank out (great) new material like they used to.

On paper, Loretta Lynn’s first release in 12 years — comprised mostly of covers, outtakes and reworked versions of old songs — would appear to veer towards the latter. Upon listening, though, it’s a mandatory look back at one of country music’s most essential artists. Produced by Lynn’s daughter Patsy Lynn Russell along with Johnny and June’s son John Carter Cash, Full Circle begins with Lynn explaining how she penned “Whispering Sea,” the first song she ever wrote. It’s a charming story, punctuated with Lynn’s infectious laugh and musings on her early naiveté about how the music industry works, made all the more poignant by the impending opening notes of the song itself; the confidence behind her vocals in that tune’s first verse shows anything but an artist unsure of herself or her place in history.

With its handful of rerecorded songs, Full Circle is a unique glimpse at how Lynn herself believes she came to arrive at that place. A new version of 1968’s hell-hath-no-fury “Fist City” makes the cut at the behest of Jack White, who helmed production duties on Lynn’s last studio release, 2004’s excellent Van Lear Rose. 1965’s “Everybody Wants to Go to Heaven” is also reprised, and one must assume it hits far closer to home for Lynn now than it did when she wrote the song for her gospel album Hymns early in her career.

The covers Lynn chooses are just as crucial as the songs she selects to reimagine. She portrays a quiet, tender strength on her rendition of the Willie Nelson-minted “Always on My Mind.” She nods to her Appalachian roots on a cover of traditional folk song (and Nirvana favorite) “In the Pines.” Esteemed guests Elvis Costello (“Everything It Takes”) and Nelson himself (“Lay Me Down”) are enjoyable, although not entirely necessary, additions to the album, allowing Lynn opportunities to show off her duet chops as well as her ability to appeal to indie rockers and country legends alike.

Released in tandem with an American Masters documentary titled Loretta Lynn: Still a Mountain Girl, this album is the work of an artist whom, after 50 years of singing in the public eye, has the luxury of writing her own mythology. Accordingly, Full Circle is a collection that defies labels; it’s too spare to be a greatest hits collection and, fortunately, it’s also not Lynn’s swan song, as the title might ominously hint — she’s still writing, performing, plotting her next move. (She’s told more than one interviewer that 90-100 songs were cut between Van Lear Rose and this record.) Rather, Full Circle is like an afternoon on the front porch listening to Lynn tell you her life story, a trajectory with an impact that no single disc could ever fully sum up.