Review: 2 Chainz and Lil Wayne Get Into a Tickle Fight on ‘ColleGrove’ 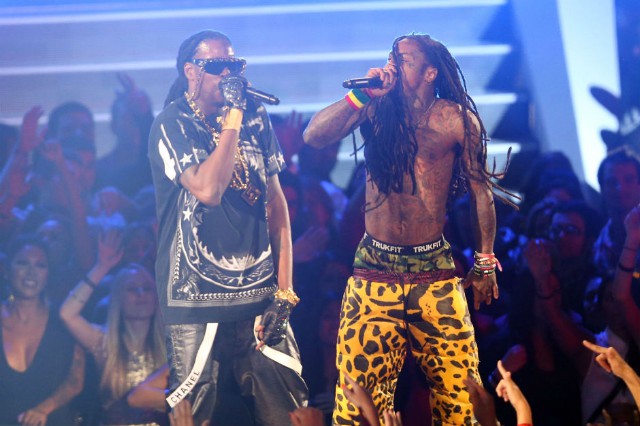 There was a moment not all that long ago — maybe summer of 2012, between the releases of Tha Carter IV and Based on a T.R.U. Story — when a surprise collaborative album between Lil Wayne and 2 Chainz would’ve been met with What a Time to Be Alive-levels of excitement. Back then, Wayne’s star was still planetary and he was as much peer as mentor to Drake and Nicki Minaj, regularly charting top-ten hits as a lead artist and selling nearly a million the first week of Carter IV. Meanwhile, 2 Chainz was on the level of buzz that Future would find himself about a year later: a charismatic figure with a singular style and sense of humor, whose voice was suddenly unavoidable on radio, both through his own singles and an array of feature appearances. A team-up between the two would have been news as world-swallowing as anything that happened in hip-hop that year.

Flash forward to early 2016, and there are probably a healthy number of hip-hop fans that don’t even realize the duo’s ColleGrove album is even a thing that happened last week. The air has slowly been let out of 2 Chainz’s crossover hype since T.R.U. Story and 2013 follow-up B.O.A.T.S. II: Me Time proved him something more than a supporting player but less than a true leading man; the last time he sniffed the Top 40 was on Jason Derulo’s “Talk Dirty” in 2014. The tired Wayne has since been conspicuously eclipsed by his pupils, releasing a series of half-hearted albums and mixtapes to decreasing fanfare as he tries to extricate himself from Cash Money, the label he helped make the center of the hip-hop universe. ColleGrove’s release, just a couple days after it was announced by Kanye West on Twitter, was widely overcast by eight tracks of Kendrick Lamar demos. (The album is likely to sell somewhere short of 40k in its first week.)

But as crazy as it is that Lil Wayne and 2 Chainz are already commercial afterthoughts, the lack of mainstream attention actually serves them well on ColleGrove. With no expectation of hit-scoring or zeitgeist-capturing, the rappers born Dwayne Carter and Tauheed Epps are free to make each other guffaw over chill beats for 51 minutes, with no guests and no obvious crossover attempts. Rather than continuing to compete with the kids, the two happily settle into the role of hip-hop’s corny old uncles, and it’s far more charming than Fuller House ever could have been.

And really, ColleGrove is more of a collaborative album in the Only Built 4 Cuban Linx… sense than a true Throne-style split; Wayne sitting in as the sidekick Ghost to Chainz’s top-billed Rae. In fact, opener “Dedication” is a solo ode from Epps to his longtime partner in crime — he and Carter go back to the former’s Tity Boi days, Weezy even singing the unforgettable hook to his group Playaz Circle’s 2007 lone hit “Duffle Bag Boy” — and it might be the best rap love song since “Trap Queen,” a heart-cuddling recounting of the duo’s history over fuzzy synths and plush bass with a croaked “THAT MY DAWWWWG” refrain. (Wayne appears on eight of the LP’s 13 tracks, but it’s clear he’s following 2 Chainz’s “rhyming ‘appetizer’ with ‘lappetizer'” lead.)

The duo work with different producers on every song — including big names like Mike WiLL, Metro Boomin, and Mannie Fresh, though most sound like they’re not trying to distract from the tap-dancing of the co-stars — and the challenges provided by a variety of beats keeps the rappers from sounding phoned-in. The tense synths and earthquake bass of “Bounce” briefly turn them into Run the Jewels, Wayne and Chainz playing hot-potato with rapid-fire syncopation like El-P and Killer Mike, with surprisingly visceral results.

On the other end of the spectrum, the woozy beat of “Bentley Truck” puts the pair in the purple, vocals increasingly slurred and laconic as Chainz brags, “Had two SS’s like ‘Mississippi.'” Epps definitely has the better punchlines of the two over the course of the album — rhyming “Hi, Officer” with “I’m high, officer” has to be one Weezy’s smacking his head over not coining — though the album’s most entertaining moment is Wayne using the “Scatman” hook to sing about his weed stash on “Gotta Lotta,” something it sounds like he’s been dying to do since ’94.

Ultimately ColleGrove is a blast because, like its title — which blends the College Park and Hollygrove hometowns of Chainz and Wayne, respectively — it meshes the two rappers’ sensibilities seamlessly, proving them kindred spirits all along. Because of the timeliness of the rappers involved and the well-circulated, near-mythical stories about its hallowed conception, What a Time to Be Alive is exciting in ways this album never could be, but because of the long-percolating chemistry between ColleGrove’s two leads and the casualness that could be afforded during its creation, this album is just a good time in ways that Alive never could be. Middle-aged hip-hop never looked so comfortable.