Update: A Tribe Called Quest has also issued a statement about the death of Malik “Phife Dog” Taylor, one of the group’s founders, saying “We are devastated. This is something we weren’t prepared for although we all know that life is fleeting.” It can be read in full at the bottom of this post.

Update: The family of Taylor has issued a statement about the legendary MC’s passing, specifying the cause of death and requesting that “their privacy be respected at this difficult time.” It can also be read in full at the bottom of this post.

Queens, New York rapper Malik Isaac Taylor, better known to fans of hip-hop’s golden age as Phife Dawg of A Tribe Called Quest, died last night, as originally reported by Rolling Stone. The cause of death has not yet been revealed, but health struggles have long been a part of Taylor’s story, dating back to his being diagnosed with diabetes in 1990, and receiving a kidney transplant in 2008. He was 45 years old.

Phife Dawg co-founded A Tribe Called Quest in the late ’80s along with childhood buddies Q-Tip, Ali Shaheed Muhammad, and Jarobi White. The group would quickly become legendary for their integration of jazz and other left-field sample choices into their production aesthetic, and for their willingness to challenge the traditional hip-hop discourse with subjects as serious as date rape and as silly as breakfast foods. The group’s first three records, 1990’s People’s Instinctive Travels and the Paths of Rhythm, 1991’s The Low End Theory, and 1993’s Midnight Marauders, are all rightly considered classics of their era, and paved the way for as many “alternative” rap acts as Nirvana did for alt-rock. 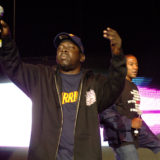 As the two principal MCs in the group, Phife and Tip would trade verses, lines, and even chorus hooks with a chemistry rarely seen in hip-hop, reflecting the longtime friendship of the pair. Tip would play more of the more contemplative bohemian while Phife would be the streetwise jokester, making inimitable cracks like, “Let me hit it from the back, girl, I won’t catch a hernia / Bust off on your couch, now you got Seaman’s furniture” on ’93’s “Electric Relaxation” and pleading with disarming innocence, “Mr. Dinkins would you please be my mayor? / You’d be doing us a really big favor” on ’90’s “Can I Kick It?” Together, the duo spawned an encyclopedia of hip-hop quotables and inspired generations of followers, including avowed disciples Kanye West, André 3000, and Pharrell.

But after a couple of somewhat lesser-received late-’90s works (1996’s Beats, Rhymes, and Life and 1998’s The Love Movement) and disintegrating trust with their label and spark with one another, Tribe broke up towards the end of the ’90s. Q-Tip went on to a successful solo career, but Phife mostly kept a low profile, releasing just one solo album (2000’s Ventilation: Da LP) while dealing with persistent health problems. His highest-profile moment this century likely came in 2011’s Michael Rapaport-directed documentary Beats, Rhymes & Life: The Travels of a Tribe Called Quest, where his daily routine of self-upkeep was memorably documented, as well as his top-five list of undersized NBA point guards. (Phife was well-known for his love of hoops — ending 1993’s woe-is-me rundown “8 Million Stories” with the unforgettable capper “And to top it off, Starks got ejected” — as well as his oft-referenced diminutive stature, referring to himself as “The five-foot assassin with the roughneck business” on ’91’s “Buggin’ Out.”)

A Tribe Called Quest would reunite sporadically throughout the ’00s to play festivals, mini-tours, and even two supporting gigs at New York dates of Kanye’s Yeezus tour — which Q-Tip called the group’s last-ever live dates. Now, tragically, it appears he’ll be right: Tip was the group’s creative director and artistic visionary, but there’s simply no Tribe without the effortless magnetism, ineffable humor, and unmistakable humanity of Malik “Phife Dawg” Taylor. He’s a New York icon and a genre great, a character whose influence can be felt in dozens of lovably flawed and impishly gleeful MCs, but whose singular charisma remains forever unmatched. You on point, Phife? All the time, Tip.

Statement from A Tribe Called Quest:

Our hearts are heavy. We are devastated. This is something we weren’t prepared for although we all know that life is fleeting. It was no secret about his health and his fight. But the fight for his joy and happiness gave him everything he needed. The fight to keep his family happy, his soul happy and those around him happy, gave him complete and unadulterated joy… until he heeded his fathers call.

We love his family his mother, his father, his son, his wife, his nieces, his family here in New York, Atlanta, California and Trinidad.

Thank you for the outpouring of prayers and support from the fans, fellow artists, music outlets, blogs, radio stations, DJ’s, social media and the music community at large. This too is part of his joy and means a lot to him. His family is overwhelmed by the support, well wishes and are thankful. His music and what he’s contributed is seismic and hard to measure. He’s affected us as much as he’s affected all of you. We’re inspired by his daily joy and courage. He wasn’t in pain. He was happy.

We take comfort in knowing he will be beside his grandmother.

We regret to share the news that on Tuesday March 22nd, 2016, Malik has passed away due to complications resulting from diabetes.

Malik was our loving husband, father, brother and friend. We love him dearly. How he impacted all our lives will never be forgotten. His love for music and sports was only surpassed by his love of God and family.”

Dion Liverpool, his manager adds, “While I mourn the loss of my best friend and brother, I also will celebrate his incredible life and contribution to many people’s ears across the world. Even with all his success, I have never met a person as humble as he.  He taught me that maintaining a positive attitude and outlook can conquer anything. Now my brother is resting in greatness. I’m honored to have crossed paths with him. Riddim Kidz 4eva.”