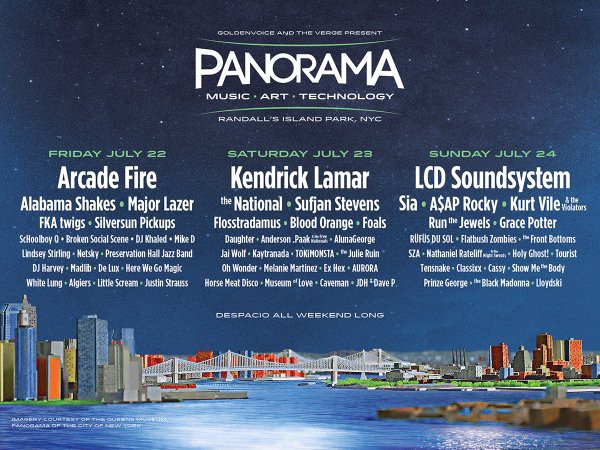 Panorama, the new festival in New York City that’s being thrown by the same company behind Coachella, has revealed the lineup for its 2016 debut. Arcade Fire, Kendrick Lamar, and LCD Soundsystem are headlining the festival’s Friday, Saturday, and Sunday respectively. The National, Sufjan Stevens, Sia, A$AP Rocky, Run the Jewels, the Alabama Shakes, and Major Lazer are also among the big names set to take the stages on Randall’s Island when the event kicks off on July 22. Three-day passes for general admission are $369, and VIP passes are $769, and will go on sale this Friday, March 4.

The festival takes place just six weeks after Governors Ball, and the company behind the homegrown festival has expressed concern that Panorama will crowd them out of the market.