Off of the soundtrack to 'Belgica,' out February 26 via Play It Again Sam 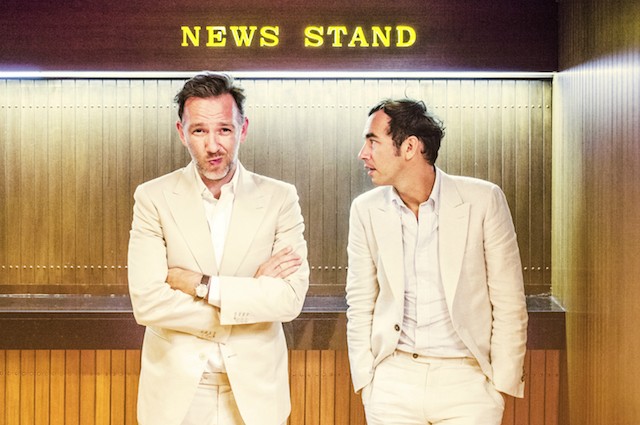 David and Stephen Dewaele, the Belgian electronic producers-cum-renaissance men behind Soulwax, have quite the diversified audio portfolio. They two have remixed as 2manydjs, developed their own Radio Soulwax iPhone app, and provided an in-game playlist for Grand Theft Auto V. Unsurprisingly, they are also no strangers to movie soundtracks, having contributed songs to the 2004 Belgian comedy/drama, Steve + Sky. Now, they’re adding to their cinematic oeuvre by linking back up with that film’s Oscar-nominated director, Felix Van Groeningen, for his new project, Belgica.

Sixteen Soulwax-created fictional bands, each with its own very real, very unique single, carry the film’s story of two brothers who open a bar that “quickly becomes a regular hangout for nighthawks.” In “Ti Ricordi Di Me,” which you can listen to below, the brothers take on the guise of androgynous electroclash outfit Erasmus. Like an Italian Peaches — whom the duo has produced for, no less — the group supplies a fair share of writhe-worthy bass and endearing, glitter-bomb sass. But why listen to us, when you can hear all about it from the Dewaeles themselves. “Erasmus, a group of wild bald women deliver an electro charged tribal attack with ‘Ti Recordi Di Me,’ techno sounds fuse & groove with ritual chanting to create a killer track that will detonate your dance floor,” they tell SPIN.

Check out Soulwax’s many masks when the soundtrack comes out on February 26 via Play It Again Sam.