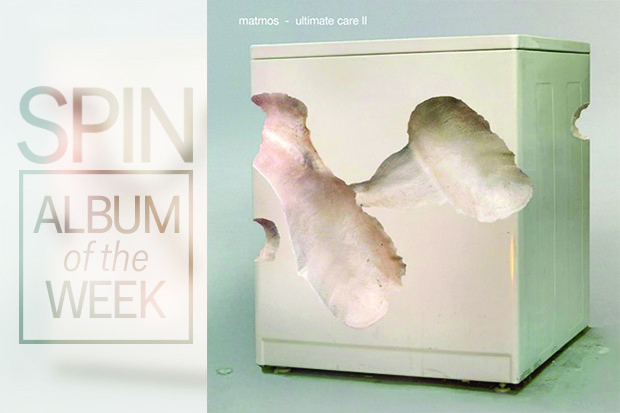 Most people become familiar with washing machines before we can walk or talk: large, square objects equipped with hatches that harness the power of water and emit convoluted sounds while operational. This most-stationary of household appliances offers an unsanctioned introduction to notions of cleanliness, order, chaos, and noise — and inspires a tantalizing peek into mystery, the forbidden. Now, let’s be real. Who among us hasn’t daydreamed — as a wide-eyed child, or even as a zoned-out adult marooned at a laundromat — of hitching a ride on the Permanent Press Express? What would that even be like?

The latest from Baltimore’s Matmos succumbs to this urge, embracing the Whirlpool Ultimate Care II model as theme and muse for the length of a single cycle. Jump-cutting back and forth between sudsy fabrics sloshing in a cylinder and an imagined quiescence, M.C. Schmidt and Drew Daniel surreptitiously unload an aesthetic grab-bag. The sound of running water faces off against a metamorphosing bionic funk that shifts from pro-flapper percolation to dank sub-industrial. Wave upon wave of gurgling, twinkly effects crash, accelerate into infinity, or leap into sea-sick focus. Synthesizer tones are thickened, then inflated with helium or sent careening around the mix like orthodontic rubber bands, à la Autechre. At one point a horde of simulated elephants briefly crash this party; moody New Age merchants follow, get washed away, then are replaced by digital-hardcore extremists. A certain degree of sleight of hand is at play, as well; when a wash cycle commences, it’s difficult to say for sure whether you’re hearing the real thing, a remarkably faithful imitation, or both at once.

At moments here, Schmidt and Daniel — assisted by Dan Deacon and members of Needle Gun, Horse Lords, and Half Japanese — appear committed to an ambitious, hallucinatory form of audio pointillism. Each new siege has receded before the audience is able to process it; this makes for a slippery listen even on an album with a conceptual through-line this stolid. As a result, Ultimate Care II is reliably dream-like, the sort of album you never quite hear in the same way twice; passages jut out or fly under the radar. Arguably the second-least obtrusive entry in the Matmos catalog (just behind 2008’s synth-mad opus Supreme Balloon), the smooth, sly Care doubles as a starting point for the uninitiated and a magical, mystical journey into the picayune-cum-avant mass-production hinterlands for everyone else.