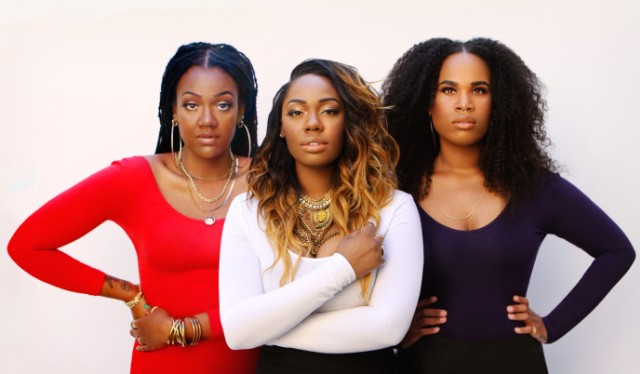 An R&B trio writing and producing its own material is rare enough; here’s one that insists on flexing its collective smarts instead of setting up a member for solo stardom. But these facts wouldn’t matter if KING’s debut We Are KING weren’t such a lovely album: a dozen songs that envisage a relationship as steady-not-static and as marked by quiet sublimity as a Brian Eno album. Imagine an ideal synthesis of form and content and you’ll understand what KING have gotten away with. Of course Prince loves them.

Like their mentor, though, KING suffers from erratic release schedules. Originally set for fall 2014, We Are KING was preceded by an EP containing “The Story,” “Supernatural,” and breakthrough single “In the Meantime.” I can understand the impatience of admirers. Opening with minor-key synth tones and the pitter-patter of an old-school beatbox, “In the Meantime” captures a state of desire that shows no sign of abatement despite several rolls on fantastically pressed sheets. Paris Strother, who handles most of the keys, echoes twin sister Amber’s valentines; Anita Bias handles the low end.

The immaculate sculpting of the earlier tracks presents itself repeatedly on We Are KING. The only referent that makes sense is Imagination, an early ’80s British R&B trio whose producers Tony Swain and Steve Jolley swathed in sequencers and electric pianos with the consistency of blue cotton. Leee John’s thin, lovely tenor seemed born of air; no wonder their most famous song is called “Just an Illusion.” But that single is faster than anything on We Are KING. “In the Heat of the Night” and “One More Love” are more precise models anyway.

Listen to KING’s meticulous approach on “Oh, Please!” — the closest thing to a capital-J jam; figuring out what made this track so disorienting took time. “Run till I have your heart,” Amber sings over tumbling percussion and huge bass. Then a chord change signals a spoken word section. I’m not sure who handles the “Why you gotta make this so hard?” bit, which is the point: the trio disappears into the mix, another element amid the horn charts and distorted guitar. Committed to sonic pleasure, KING regard themselves as another set of instruments, absorbed and projected through speakers. It’s like hearing a full Fela album side as female R&B.

But We Are KING’s quiet moments have more churn than most bands’ fast ones. How is a song called “The Greatest” so damn modest? Here “Taking home the gold” is a declaration as mild as “Have a cup of honey ginger tea.” The girls harmonize with a distorted gremlin vocal on “Love Song,” the synths spilling peacock-blue pools of sound. On a closer aptly titled “Native Land,” KING construct an ecosystem, life peeking out from dew-covered logs and beneath crushed heather, a hybrid of George Michael’s “A Different Corner” and Van Morrison’s Poetic Champions Compose. I know it has words. I think they’re in English.