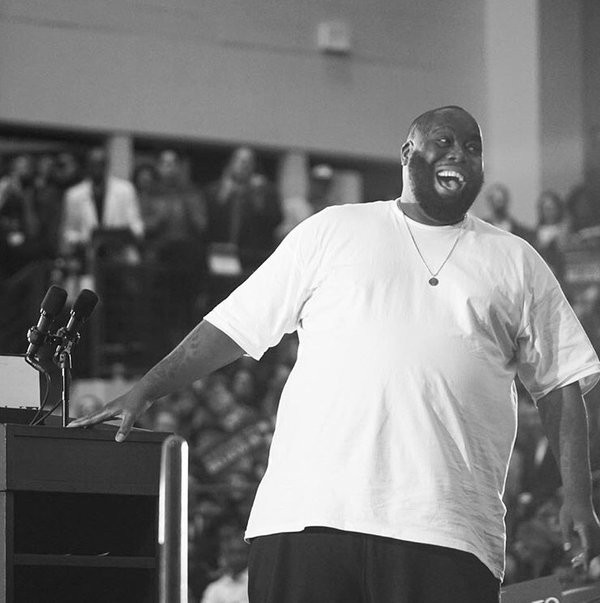 Longtime Bernie Sanders advocate and campaigner Killer Mike drew ire from Hillary Clinton supporters after a rally in Atlanta where he quoted activist Jane Elliott: “Jane said, ‘Michael, a uterus doesn’t qualify you to be president of the United States. You have to have policy that’s reflective of social justice.” He spoke in response to luminaries such as Gloria Steinem and Madeline Albright saying that women should vote for Clinton because of her gender. Andrew Woodhouse, the head of one pro-Clinton super PAC, Correct the Record, tweeted that the rapper’s speech was “sexist bulls**t.”

Like their hasn’t been enough sexist bullshit on this campaign – now this from @BernieSanders camp. https://t.co/3Uq36QQAat

After receiving similar criticism on Twitter, the Run the Jewels rapper clarified in a series of tweets that he was quoting Elliott, as well as stating which female politicians he does support:

So Women are being told to not vote Hillary is sex betrayal & Becuz another progressive woman says something disagreeing I’m sexist. Lmfao — Killer Mike (@KillerMike) February 17, 2016

I wud gladly see Any one who can lead this country on behalf of the worker lead. Cynthia McKinney, Elizabeth Warren, Connie Rice. I’m ready

But i don’t and never will Hate or think less of woman. Sen. Nina Turner is my Next Great Political Champ but I’m sorry No HRC for me.

You can watch the entire speech here and the controversial quote in context in the clip below, via NBC 11Alive.