Ida Engberg and Adam Beyer, Techno’s Power Couple, Have Had Sex Before the Big Game

Their ideal Valentine's Day date is exactly what they're doing: headlining a major techno festival 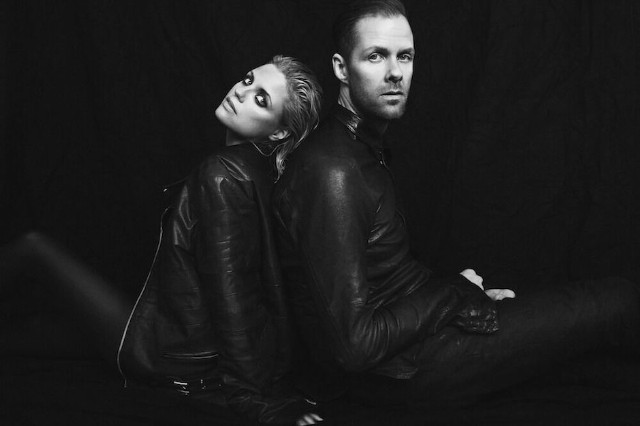 Adam Beyer and Ida Engberg, a married Swedish couple and parents of three who also happen to be warehouse rafter-rattling techno DJs, are in a privileged position to ride out the latest trend among electronic musicians: back-to-back live sets (B2B for short), when two producers switch off playing tracks behind the same set of controls. “Most DJs who play back-to-back just meet at the club,” Engberg tells SPIN over the phone from her and Beyer’s newly renovated house in Stockholm, where they’re still unpacking boxes while their kids run around in the background. “They don’t sleep together.”

Nor do they headline a major European festival’s Stateside landing — on Valentine’s Day. This weekend, Beyer, 39, and Engberg, 33, will spin together in the wee hours of the morning at the New York City debut of legendary Dutch mainstay Awakenings Festival, which, according to founder Rocco Vennboer, was inspired by witnessing the Grateful Dead’s dazzling light production during a trip to America. Together, the Swedish producers draw crowds with a fluid push-pull between Beyer’s Sweden-via-Berlin take on the gritty sounds of Detroit’s Underground Resistance collective, and Engberg’s funkier techno narratives, which touch more on the Balearic house she first fell in love with. “When I play alone it’s more serious,” says Beyer, “but when we play together it’s more about the groove and the atmosphere.”

By both of their long pause-filled recollections — admittedly addled by years of partying — they’ve been taking the decks together since a 2009 Miami party for Beyer’s techno label, Drumcode. This is one of their biggest shows, and one with the tightest time constraints: Each performer on the festival’s bill only has two hours, tops. “It’s hard when you have 90 or 120 minutes on really big stages to have the easygoing, spontaneous flow of four or five hours at a club,” says Beyer. “You kind of have to make sure you kill it.”

European festival Time Warp came to the U.S. last year, Awakenings is coming this year, and Movement is celebrating its 20th anniversary. Do you think there’s something changing in the way America is incorporating techno into the mainstream?

Adam Beyer: I’ve been coming to the U.S. since ‘97, almost 20 years. When I first came the scene was really good, but different. There weren’t those super-huge parties, but there were some pretty good clubs, and there was definitely always an underground. After EDM hit, things have gotten a lot bigger, but techno is perfect to keep mid-sized parties on a good level without selling out. In Europe, it’s not something that just comes and goes, like we’ll see with EDM. Maybe they’re over the peak now, and the other side is a slope. The U.S. needs a strong techno brand like Awakenings, just pretty much pure techno.

How did you guys meet?

Ida Engberg: I think we played together at some disco thing at Club Space in Miami in 2009 or 2010. I was supposed to close, and then he started to play a little bit longer after a long, long party. I’m not totally sure when the first time was ’cause there’s always been a lot of partying involved. [Laughs.] But we didn’t meet in Miami, we met in Stockholm. The owner of the Cocktail Club, I think, introduced us. And then we met again when I was living in Ibiza in 2006.

Beyer: Well, Ida was about 23, and I was 29. I thought she was quite young. Cute, obviously. But I first saw her behind the decks in the clubs in Stockholm, and she was really good. I felt it would be cool to have her on some of the Drumcode parties, ’cause I don’t like when it’s too male-dominated. She had her own style, which was different from all of the guys.

Adam, you’ve said that you were influenced by [Detroit techno pioneer] Jeff Mills, and Ida, you’ve talked about how your time in Ibiza shaped your music tastes. Can you each tell me a little bit about how your taste evolved and how they come together?

Beyer: For the last ten or 15 years, I didn’t want to only play the harder techno. When I was totally bored with it in the mid-2000s, I started to be influenced by my minimal early-’90s stuff and quirky after-party music. Ida came more from the other side: very house when she started, then the underground, through a minimal phase, and then kind of deep house, then fell in love with techno. After our Mixmag cover, we’re getting booked to headline techno shows, which for us is not weird, but maybe not what we intended it to be.

What’s it like playing back-to-back sets with each other?

Engberg: When you have a club gig, you can just play your records and whatever happens, happens. Sometimes it goes to the left and sometimes it goes deeper. You don’t really prepare those sets, of course, but when you have an hour and a half, obviously you can’t just go up on a huge stage and improvise. Normally that’s when you really get into it and the magic starts to happen.

Beyer: It’s been hard to separate me solo, Ida solo, and the back-to-back. I’m used to the older-fashioned way of mixing: playing with three decks, always turning and twisting knobs manically. Ida comes more from a song-based background, where she finds great tracks that you need to hear from start to finish to realize how good they are. A lot of the time I tend to overlook the music because I’m listening to how it’s produced. So when we play together, it kind of creates a good flow, because my music sometimes is like the bridges between her bigger tracks, or more musically interesting tracks.

When you were in Ibiza and pregnant, did you feel the baby kicking to the beat or anything?

Engberg: In the beginning I didn’t feel anything, but in the end I was at week 30, so in the last gig she was kicking a lot for sure. They just hear the bass. I think it sounds quite nice in there.

Have your kids shown any interest in learning how to make music?

Engberg: Not yet. They’re all into Frozen. They have their own playlist now, so they decide what they want to listen to. It’s hard to introduce new music to young kids — they just want to hear the things they can sing along to, and they know. The oldest one is four, so they’re still very young, but when they’re nine or ten, there’s gonna be a lot more interest.

Beyer: Unicorns in particular, and pink princess stuff, are very cool to them. What mom and dad does is not so cool.

This is kind of a personal question, but a lot of athletes will say, “No sex before the big game.” Do you guys believe in that?

Engberg: No, we never really had that. Normally we’re a little bit more relaxed after the gigs, than before.

Beyer: After is more regular but before has happened. We don’t have to physically perform like an athlete in that sense. The only thing with having sex before the gig is usually we’re so late with preparations. [Laughs.] So if we skip sex, it’s because we need the time to get the last bit of music in order.

Death Cab for Cutie Played Transatlanticism in Full in Seattle