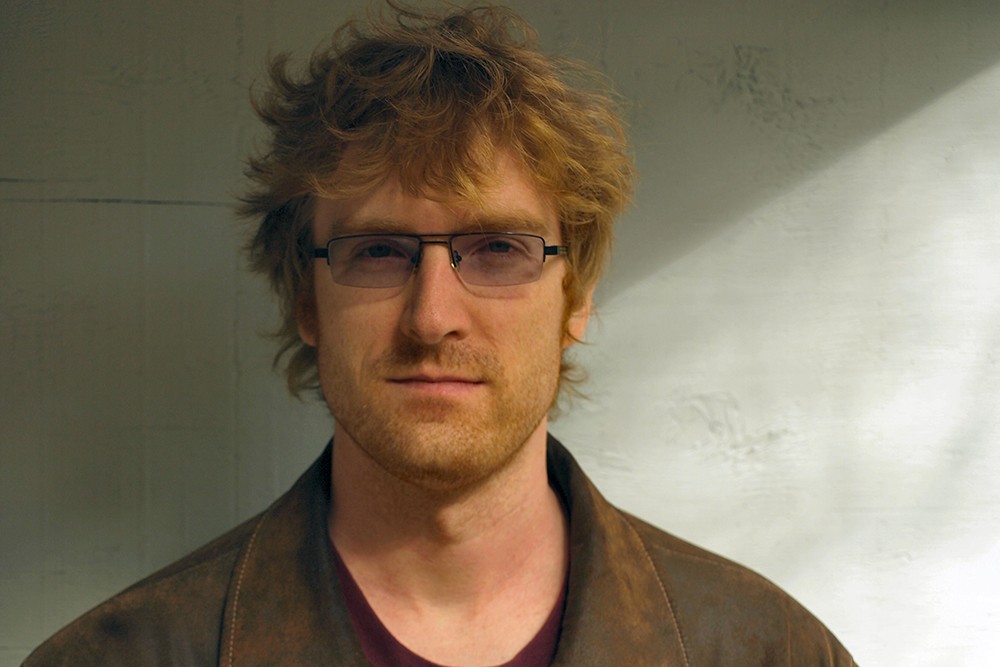 Dinosaur Comics — a webcomic whose art has been the same single strip for 13 years — is Ryan North’s teen. “I’ve been doing this work for 13 years,” he tells SPIN over the phone from his Toronto home. “I could’ve just had reproductive sex instead.”

During the years that Dinosaur Comics’ static art and dryly existential ruminations approached dino-puberty (“T-Rex is getting all sullen, resentful,” North says of his main character), North’s become one of the more prolific and singularly funny writers in comics. He’s the writer of one of Marvel’s most offbeat and popular series, The Unbeatable Squirrel Girl, a meta, whip-smart title that follows the adventures of Squirrel Girl, a young, bushy-tailed heroine who has repeatedly beaten the biggest bad guys in the universe despite possessing only modest super-strength and the ability to talk to squirrels. (It’s something of a running joke). He’s has also written comics based on the Cartoon Network series Adventure Time, and he turned Shakespeare’s Hamlet into a choose-you-own-adventure style book titled To Be or Not to Be (of course). A follow-up, Romeo and/or Juliet, is set for a June 7 release date.

SPIN spoke to North about how music affects his work, who his favorite cartoon musicians are, and why the Disco-themed X-Men character Dazzler endures despite the widely publicized death of disco. 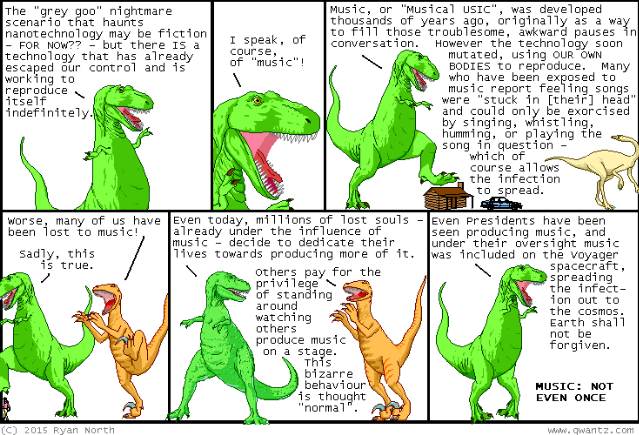 What was your first album that you ever bought or downloaded illegally, back when you were a teen?
When I was a teen you could only buy. The first mp3 I downloaded, which I guess was illegal, was a symphonic rendering of the Super Mario Brothers 1-1 theme song. It was great. I was like, “This is blowing MIDI files out of the water. This is the future, right here.” The first album I got… [Laughs.] I have the worst taste… I think it was The Simpsons Sing the Blues.

I, uh, also had that album.
It’s not very good! Then, years later, I bought Aimee Mann’s Bachelor No. 2 because I had downloaded her music, and wanted to support the artist, which makes me sound way better than the Simpsons CD sure does.

What do you listen to these days? Do you listen while you write?
A lot of writers work in coffee shops or places like that because they like human interaction — and coffee, I guess — but I write alone for a couple reasons. I’m usually writing comedy and trying to make myself laugh at my own jokes. It’s really embarrassing to do. The other reason is music: I like it to be interesting, but not too interesting because then I’ll be thinking about it and not what I’m trying to write. So I’ll often listen to either instrumental music, or a song on loop for hours. Over and over again, which works for me, because I’m not really listening — but if anyone else is around, it just drives them crazy. 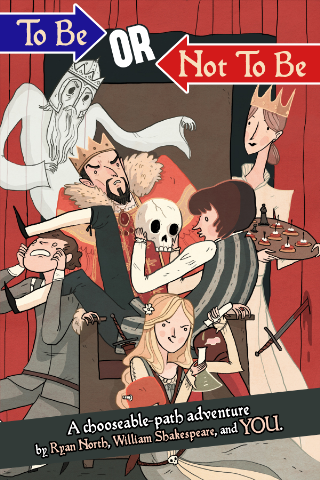 Do you listen to different things depending on what you’re working on?
There’s a scene in the play Hamlet where Hamlet gets sent away from Denmark, but comes back and is like, “Oh yeah, hey guys. I know you sent me away, but, crazy story: Pirates attacked, and I took over the ship and now I’m here. Anyway, let’s get on with the play.” It’s a really quick aside that, to modern audiences, is crazy! So I showed that part in my book To Be Or Not To Be, and while I was writing that I was listening to the Pirates of the Caribbean soundtrack – pirate-y-type music.

Writing a real song is easy; writing a fake song is hard
MORE >>

Do you have a favorite comic character who is a musician?
I think my favorite would be Marceline from Adventure Time. It’s a cheat because she’s a cartoon character, but she’s in the comics I write. She’s a musician, and music’s important to her. It informs her in a way that you don’t normally see in comics, playing music and listening and feeling music are important to who she is, as opposed to just something she does.

Yeah, her “I Remember You” backstory with the Ice King is… pretty brutal for an alleged children’s cartoon.
It’s heartbreaking! In a lot of her most intense moments, she’s singing, which I guess goes back to the idea of opera, where big emotions can only be expressed through song. It’s nice to see it done in a sincere way, and not a funny way.

Speaking of comic characters whose relationship with music who might not be as sincere: Do you have any idea why Dazzler is still as relevant as she is? I feel like she has stuck around and aged much better than that character should have.
I don’t understand it at all. Because she’s like a disco lady — she can make sound into light, right? Is that it? 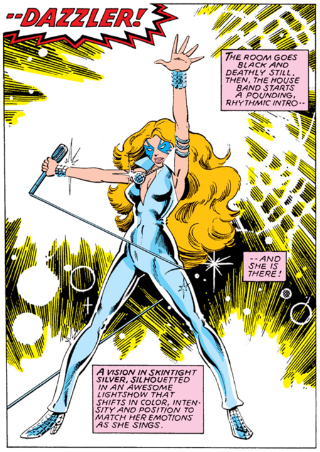 Yup.
I’m with you. My partner on Squirrel Girl, Erica Henderson, loves Dazzler and wants to get Dazzler into a comic as soon as possible. Which is fun, but I need to do my Dazzler research, I guess. There’s a Marvel hero who was like a trucker – his power was he was really good at being a trucker — and if you told me Mr. Truck-O was still relevant in an alternate universe where Dazzler isn’t, I’d be equally as confused. (Ed. Note: That’s not the character’s real name, but we s**t you not, he existed).

Is there room for both Dazzler and Jubilee in comics? They don’t quite do the same thing, but…
Yeah, 100 percent. I actually put Jubilee in Squirrel Girl. I made it a priority. The only difference is that Jubilee was on the ‘90s X-Men cartoon show, so I’ve had a decade or two to think about Jubilee. My only exposure to Dazzler was, like, pictures of Dazzler, people talking about Dazzler, and Dazzler’s Wikipedia page, which I haven’t read.

What type of music does Squirrel Girl listen to?
I actually made a playlist for Squirrel Girl! My idea for Squirrel Girl was that she is a computer-science student who is also a superhero, and her idea of what her secret identity is is kind of loosey-goosey. So I put “I Can Lift a Car” by Walk the Moon on her playlist. The chorus is “I can lift a car up over my head,” which I [picture] Squirrel Girl hearing and imagining she’s being really subtle about hiding her super-strength.

I put in a cover of “Maybe Tomorrow” — the theme from The Littlest Hobo, which was a Canadian TV show about a dog who travels from town-to-town solving mysteries. Squirrel Girl would like this because it’s about an animal solving crimes. I gave her my love of cross-genre covers. I also put Asteroids Galaxy Tour’s “The Golden Age” on there. It’s perky, upbeat, and good to beat someone up to, I assume. And I put on some electro-swing, like Parov Stelar’s “Catgroove.” 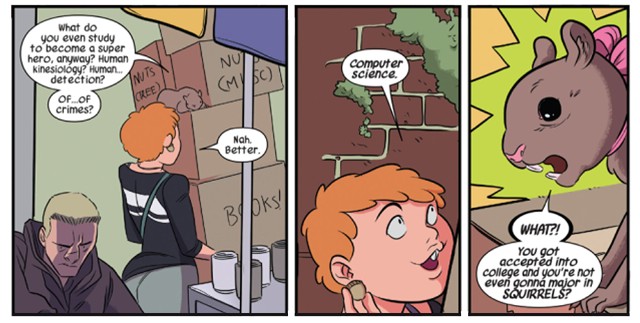 Squirrel Girl is perhaps the premiere rodent superhero, so: Does she have thoughts on Alvin & the Chipmunks?
[Sighs.] This is a difficult subject, which I hoped I would never have to deal with, because they’re in different corporate universes. [Laughs.] But… There’s a lot going on with Alvin, if you look at it. He’s a chipmunk who lives with this man. What’s the man’s name?

Marvel released a series of more than 50 variant covers that are all homages to classic hip-hop albums.
MORE >>

Dave?
Dave! He lives with Dave! I was never clear on why. Like, if they moved into his house, or if they’re pets, or colleagues? Or if they’re little micro-humans? Then they have a band? Everyone treats that as normal, but I don’t remember if, in the Alvin cartoons, there were other animals running around talking and singing?

There was a girl chipmunk group.
There was a group of gender-swapped chipmunks that were also running around, singing, but I got the sense that, in the universe, Alvin and the other bands were sort of novelty acts. Like no one’s used to seeing chipmunks sing, which struck me as weird. But to answer your question, they’d probably get along fine. Squirrel Girl’s got a friend named “Chipmunk Hunk” and he’d be all over this. 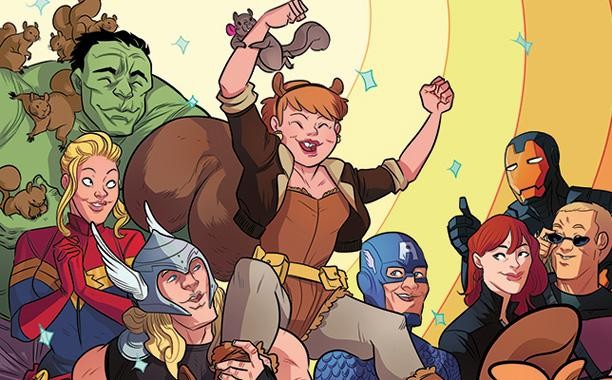 Fox Is Turning Stan Lee’s Life Into an Action Movie