Review: Bloc Party Take Us to Church on ‘Hymns’

Getting religion doesn’t have to mean going door-to-door, or renouncing anything you’re not sure is killing you. It doesn’t even have to mean deciding there’s something wrong with everyone around you — it can mean the opposite. It does often seem to mean you’re gonna get kind of drippy, and bowled over by what the unsaved could’ve sworn were banalities. But maybe that’s just what peace looks like from the outside. We don’t know.

Anyway: Kele Okereke’s been uncomfortable a long time. “Like Eating Glass”, the ice-choked waterfall that opened Bloc Party’s first and most athletic album in 2005 introduced the band with a howled blurt: “It’s so COLD! / In this! / House!” The first single off the gloomy follow-up, “The Prayer,” began by begging “Lord, give me grace / And dancing feet / And the power to impress,” an anxious wishlist as much in coke’s wheelhouse as God’s. Hymns opens the same way, but with a new rhythm section (Menomena veteran Justin Harris) subbed in for Bloc Party’s departed sinew Gordon Moakes (drummer Matt Tong was replaced by Louise Bartle after the album was completed) and self-domination subbed in for social domination: “Lord, give me grace / And dancing feet / As I conquer all anxiety.” Now that one might be a job for God.

The realigned Bloc Party is tamer in ways both good and bad. Okereke sounds more literally centered than he ever has. He’s comfortable as the focal point of the less roiling, less violent new band — in smoother voice not just than the alienated young yelper on Silent Alarm, or the deliberately abrasive architect of Intimacy‘s digital squawk in 2008, but also than the electropop crooner (“Kele”) of two solo albums and a handful of accidentally abrasive EDM features. At its most locked-down, this lineup’s Metric-like synth-rock (“My True Name”) is a far cry from the old band’s tidal roil, but Okereke’s fills the dynamic gap more confidently than he could have then. “I have learnt the way to pray,” he chants early on.

Of course there are a lot of ways to pray, and it’s possible to be happy Okereke’s found one and still wish it were a little sweatier. With nifty exceptions (“Virtue,” a more ominous song than you’d think, is one), Hymns adopts the stately, faintly uplifting shimmer relied upon by late U2 and other merchants of the numinous. It’s a better album than 2012’s conflicted, twilit Four, but Okereke’s new grace awaits an engine as powerful as the one enjoyed by his old gracelessness. Not that the future couldn’t be bright. Hymns‘ closer, breakup song and neat pun “Living Lux,” knows exactly what to pray for: “I had conviction / And you had style / A lethal combination.” 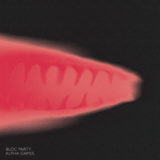