"Now [Albini] says, 'Naked Raygun is like seeing your old girlfriend who got really fat.'" 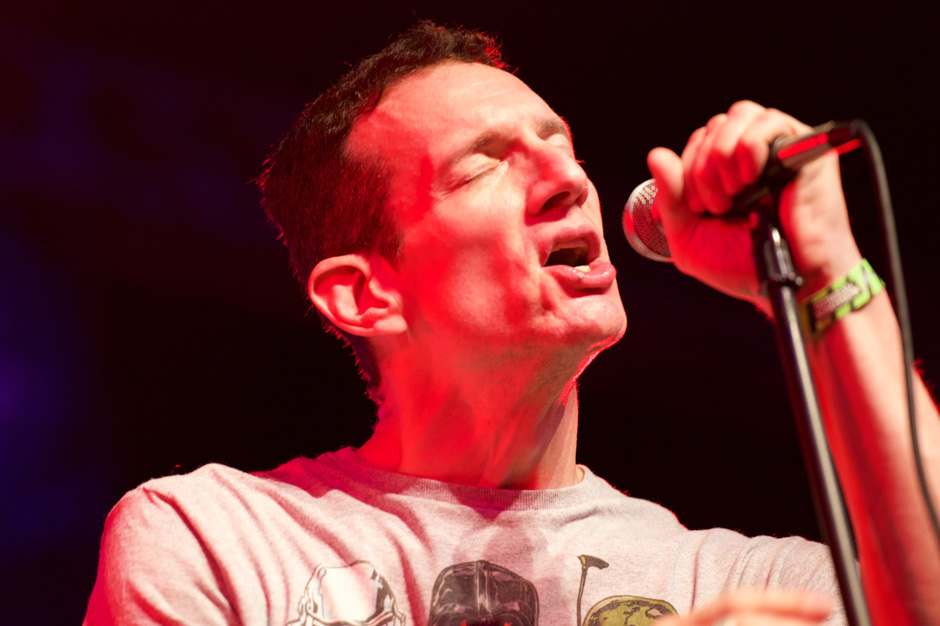 In the 1980s, Naked Raygun were at the forefront of Chicago’s burgeoning punk scene, mixing politically charged melodies and a post-hardcore racket. Their devotees include local artists like Alkaline Trio and Screeching Weasel, as well as modern-rock royalty like the Foo Fighters — a 1983 Raygun concert at the Cubby Bear was Dave Grohl’s first-ever concert.

Despite five beloved albums and selling out hometown venues like the Metro and Riviera, the group — whose sole constant member is 55-year-old singer Jeff Pezzati — never caught a bigger break, and split up in late 1991, missing out on the Year Punk Broke. Despite a handful of one-off shows over the years, the group reunited in 2006 and found themselves playing for their biggest crowds yet. Grohl even paid tribute to them on his HBO show Sonic Highways, and in summer 2015, he had them open for the Foos at Chicago’s Wrigley Field.

The band is still out there, performing as much as possible in spite of day jobs and Pezzati’s Parkinson’s Disease, and they’re already halfway through recording their first album since 1990’s Raygun…Naked Raygun. It doesn’t have a title or release date yet, but promises the same amount of punchy, bombastic, malcontented anthems the group put out during their heyday. SPIN caught up with Pezzati to talk about the new LP, Grohl’s generosity, politics, and his old friend Steve Albini, who had some less-than-kind things to say about Naked Raygun’s current incarnation.

Naked Raygun have been back together for almost ten years now. When did you decide to start writing new stuff?
Well, it came down to having new ideas and everybody had some songs. We’re always coming up with little pieces of songs, and some people have more than others, so we decided to crank it out. I think it’s going to be a good one.

Do you see any sort of theme developing as the songs come?
No, it’s pretty much more of the same. You know, vague complaints about the State of the Union and loves lost and frustrations. There’s a little more getting older and frustrated. Eric [Spicer, the drummer] wrote a song about thinking he’d be in a different spot now when he was his age. He thought things might be easier. I never thought that. [Laughs.] But you do expect some relief as you get older — you save some money, you’re at your job for a long time. We all had day jobs, so I guess he’s feeling some frustration there and wrote a song about it. We have to get back in the practice space and hash out a few lumps on these songs before we go back in and nail them down. Hopefully we’ll be doing that in the next month-and-a-half here and then get something out by spring. This album is sort of overdue now.

Of the new songs that are about the State of the Union, are there any specific things in today’s political climate you’re writing about?
I’m writing a song — I don’t know what it’s going to be, but some of the lyrics are “I don’t want to be your suicide bomb” and thought-provoking subjects like that. With the political process, we’ll just generalize and poke fun at it and cause people to think a little bit, maybe. We don’t point out any specifics. Donald Trump is pretty incredible, though. Really a rabble-rouser. I can’t see him actually being President, although weirder things have happened. I don’t see him going all the way — I think he’s too selfish. He’s gotta have a lot of ghosts in the closet. All those wheels and deals he’s done through the ages over real estate…

Having a specific timely reference can really make a song seem dated.
I find it weird when I like that song, that pop song where the guy sings about 1969.

Bryan Adams?
Bryan Adams, yeah. I like that song. I don’t care what anybody says. The Ataris cover that. [Editor’s note: Pezzati is referring to Don Henley’s “Boys of Summer.”] Even then, you’re thinking, “Wow, I wasn’t even that young in 1969. I’m really f**king old. How old is that guy?”

Do you have plans for releasing and touring behind the new album?
It won’t be on Riot Fest Records. I know it’s going to be a different label. I don’t know which one. As far as what we’re going to do, we meant to do a tour of the east in December so we’re going to tour in January or February. We haven’t done the East Coast in a long time.

In the last year, you guys got a lot of attention thanks to Dave Grohl and Sonic Highways. What’s all that been like?
It was pretty gratifying. We know he’s been giving shout-outs to the band for years at concerts, especially in Chicago, but I don’t think he’s really had the opportunity to do anything for us until then. He came and interviewed me and then had me play at the Cubby Bear, one song, “Surf Combat.” It’s 58 seconds long, but that was fun. Then the next day they asked us to play Wrigley, which is really nice of him. He didn’t have to do that, but he did, and we appreciate it. He seems to be very genuine. His band is all very nice people too. Why wouldn’t they be? They’ve got the world by the ass.

What was the Wrigley show like as an overall experience?
Well, I think some of the band was a little nervous. I wasn’t though. When I take off my glasses, I can see far but I can’t make out faces, per se. I can tell if you’re a boy or a girl but I can’t see details, so every show is a little bit the same for me. [Laughs.] We did the sound check and the sound just left — it’s such a big place. But we just go out there and play. I realized the stage was too high to go down and sing with the crowd. It’s like ten feet tall. You’d die trying to get down there and back, so I couldn’t stick the microphone in the crowd, which was kind of a bummer.

In a recent interview with Marc Maron, Steve Albini talked about seeing you guys set up in all four corners of a venue instead of just playing together onstage. What do you remember about that?
Yeah, we did that once at Cubby Bear. We decided to set up in all four corners. That’s sort of a square room. You had a puddle of people in front of each person, and somehow we stayed together. I don’t know if anybody really appreciated it, but it was sure different. Albini was really into the band for a long time early on. Now he says, “Naked Raygun is like seeing your old girlfriend who got really fat.” I wouldn’t argue with him, except he hasn’t seen us. He doesn’t come out to shows. That’s the only thing that pisses me off about that comment is that he hasn’t seen us, so it doesn’t really bother me that much but he should really come and see us before he says that.

That does sound like him.
Yeah, I know he’s said it before. He’s a very caustic guy. If you catch him at the wrong time, he’ll fry your ass. I get along good with Steve, though.

When you’re on the road, how much does Parkinson’s affect you as a performer?
My girlfriend and I have got it down to a science, what I have to do during the day, what times. It’s a funny disease — it’s not just day-to-day. It’s more like hour-by-hour. Now I’m feeling good but if I don’t remember exactly what time I took my pills and exactly what time I took this other stuff, then I will fall apart completely and not be able to do much, and then it takes a while to get it kickstarted again. I have to stay on it, set alarms, and really be on top of it to stay with it. I hardly have any of that dyskinesis. I have a little in my head, like sometimes my head will shake a little bit back and forth. Usually I don’t have it, though. I can meet people and they don’t know I have anything wrong if I’m really on it. That can last for three hours, but if I don’t take pills in that time, I have to excuse myself and go shake somewhere. [Laughs.] There’s a lot of f**king diseases out there. Mine could be worse. It’s just a thing I have to deal with.

Juan Ingaramo Wants to Bring His ‘Pop Nacional’ to the World