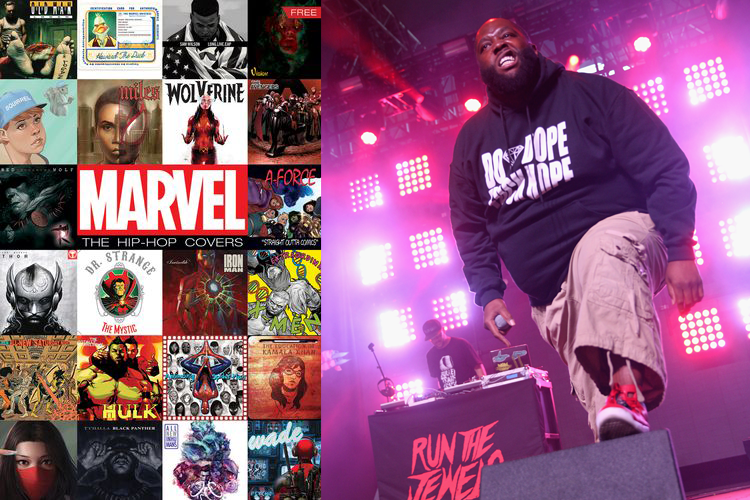 This past summer, Marvel Comics unveiled dozens of variant covers to their biggest superhero books that were homages to classic hip-hop albums, and they collected all of them in a special issue that came out today, featuring an introduction by Killer Mike of Run the Jewels fame. In the introduction, Mike reflects on the importance of comics to his life, and showcases his immensely geeky and thoroughly awesome knowledge of the Marvel Universe and hip-hop. It’s a hoot to read, thought it reveals that Mike is seemingly on board with Marvel’s plan to make the Inhumans a thing. It’s not going to work, Marvel. Black Bolt and Medusa are no André 3000 and Big Boi. Anyway, here’s the intro:

Run the Jewels Honored in Some Amazing Marvel Comics Covers

I have two dads, both of whom played a significant role in raising me: my biological father—a conservative, pro-gun cop—and my mom’s husband—my “dad,” a liberal man of the arts with an amazing collection of records and comics. He was the one that introduced me to comics. I still remember when he gave me first copy of Uncanny X-Men. Seeing Storm for the first time—a beautiful, powerful, dark-skinned woman that looked like my mother with a Mohawk—I was instantly drawn to her.

Comics became that thing for my dad and I that was ours. Going to Atlanta’s West End Mall with him became the highlight of my week. We’d get donuts at the Krispy Kreme, chill at the comic book store next door for hours, then catch a movie at the dollar theater. So when I first got news of Marvel Comics’ Run The Jewels variant covers, my dad was the first person I thought of and the second person I told (wives, bruh). To go from sharing comics with your dad to seeing something you’re a part of actually on a comic, to seeing those covers lay the groundwork for something as big as Marvel’s Hip-Hop cover initiative is unreal. Two things I love combined? It doesn’t get any cooler.

Without question, Marvel’s Hip-Hop variants are cool because they show how far-reaching Hip-Hop’s influences has grown, but they’re even cooler when you how perfect the pairings for the covers are. Choosing Nas’ Illmatic cover for Miles Morales’ debut in the Marvel Universe proper couldn’t have been more on point. The two Wolverine covers that flip DMX’s Flesh of My Flesh, Blood of My Blood and Ice Cube’s Death Certificate—awesome! Kamala Khan taking cue from The Miseducation of Lauryn Hill—fitting. Outkast’s Aquemini for the Inhumans—next level. I mean, think about that last one: In the Marvel Universe there used to be two basic players: traditional super heroes (Avengers, Spider-Man) and mutants (X-Men, Wolverine); in Rap, the conversation was originally dominated by East Coast and West Coast, then Outkast came along and cemented the South as a legitimate third force to be reckoned with. Just like the Inhumans are doing this year.

Another impressive thing about these covers is the range of artists/albums chosen. Lil B’s Blue Flame cover?! Says it all. The Sugar Hill Gang, Tupac, A$AP, Kendrick, ScHoolboy, De La, Wu Tang, Wiz, Public Enemy—hell, they even figured out how to use Vanilla Ice’s cover in a way that made perfect sense! The age of Internet lists has shows us how difficult it is to please everyone, but Marvel manages to represent Hip-Hop in every one of its various incarnations since its glorious inception. This was no small feat. This was clearly done with love and the type of responsibility we could only hope more people take cue from when representing such an influential art form in my life. Not to mention they look cool as $#!#!