How rock’s greatest generalist made posing an art 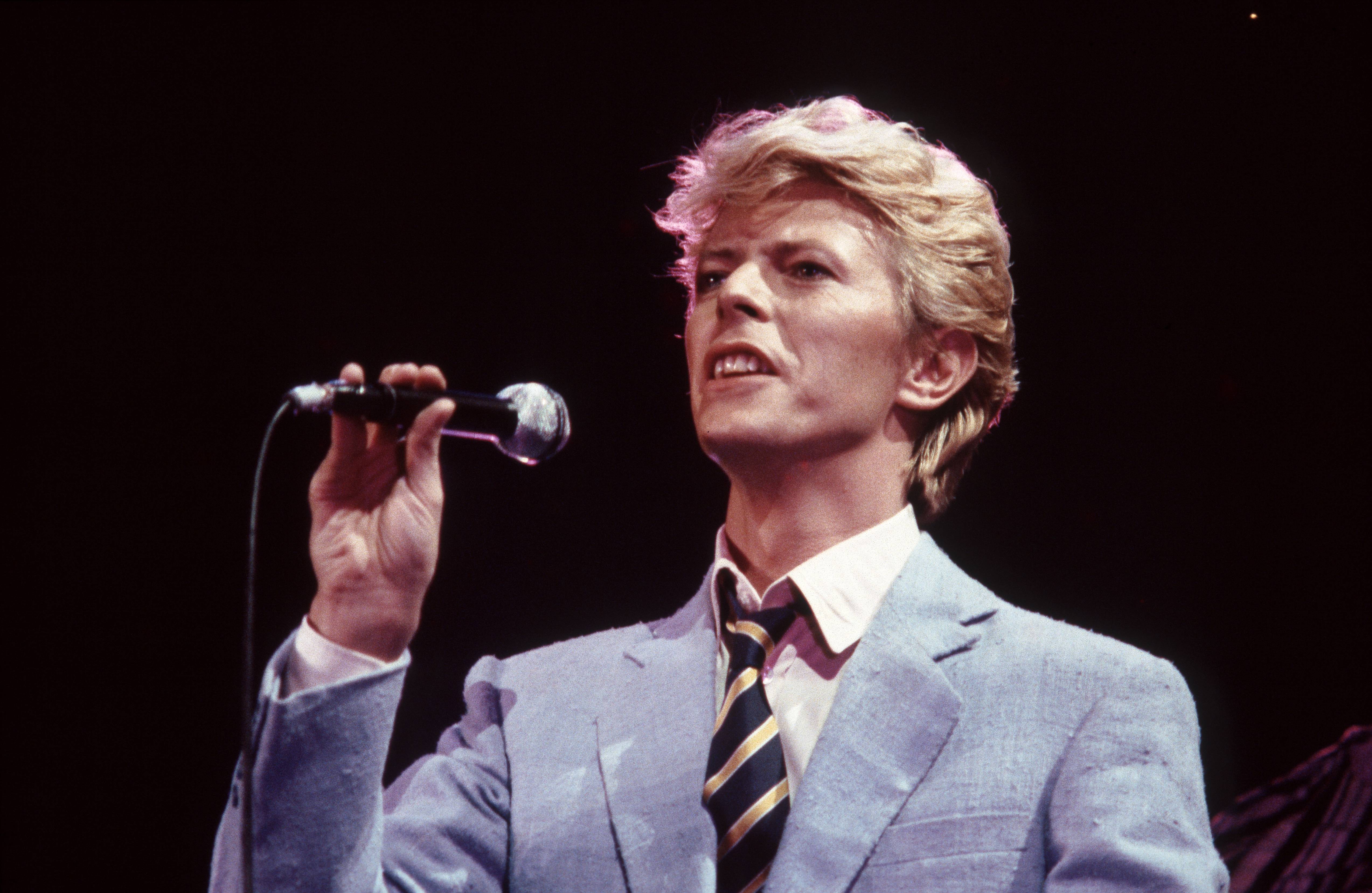 For the kids from the ’70s disappointed by the purported normalization of David Bowie in the ’80s, take a look at this poster. When it went up in my regional library the year he released Never Let Me Down, it freaked me out. Although he wore the correct jock-prep clothes — tight jeans, letterman jacket, acceptable wedge haircut — something was off. The bare feet and puckered mime-mouth suggested a card putting one over on us. It wasn’t a parody of American high school blandness, it was a repurposing of it. Did the library, did the literacy campaign, get the joke? Or was David Bowie, Famous Person so compelling that he could’ve held Dostoyevsky while wearing Aladdin Sane lightning bolt paint?

Oh, look out, you rock and rollers.

But to be a queer fan of David Bowie in the ’70s meant expressing horror and shame when, in 1983, during the process of straightening himself for the sake of his U.S. commercial apex, Let’s Dance, he rather tetchily acted as if he had never admitted to his bisexuality. “I was experimenting!” he said. The year 1983 was not a good one to be a homosexual man. The gay cancer got a new name. Friends and lovers were healthy one day, gaunt and blemished the next, and dead tomorrow. I can imagine the betrayal.

A few years after my own coming out, however, I understood what he was after — the same way it took years for bands to latch on to a permutation he had long abandoned. Queerness was a pretension, a pose, an ambition. “It’s true — I am a bisexual,” he said in a 1976 interview. “But I can’t deny that I’ve used that fact very well. I suppose it’s the best thing that ever happened to me.”

I want readers to understand the guts it took for a British singer in 1972 to use an admission of homosexuality as a way to jumpstart a career only to repudiate it 11 years later like he did Ziggy Stardust’s red plastic boots. By the time Bowie actually scored hit singles in America in 1975, the public had had several years to absorb the news. He knew. Lure ’em in, make it look easy, get out, leave ’em fuming. He got a suite, we got defeat. If I’m gay thanks to Lou Reed, I’m cavalier about it thanks to David Bowie.

It’s not really words — it’s just the power to charm.

Insouciance is the enemy of the strong. Not taking elite culture seriously is the gravest offense one can hurl at it. That’s why “oh, look out, you rock and rollers” is the truest line he ever wrote. The threat implied he wasn’t a rock and roller. He was going to pretend to be a rock and roller, show up the real ones by hiring junk-glam riff master Mick Ronson, and demonstrate how silly it all was by moving on. So he packed a bag, as he sang in one of his best songs, and moved on. When well-meaning commentators call him a “chameleon,” I fume. These lizards change colors out of fear — does this sound like Bowie? Galaxies of music changed thanks to Bowie. Bands sprung from his discards. They made careers out of them, often abbreviated and ignoble ones. Bowie did not. His talent, perhaps genius, was to use the posture of a generalist to sustain a career.

The trick, though, is to know when to leave. Like the boomer icons whom he made look preposterous, Bowie in the ‘80s was adrift. Asked to write “David Bowie songs” for the sake of his corporate overlords, he flailed. There is no such thing as a “David Bowie song.” He couldn’t just sit down and write a song; he had no talent for it. The good songs came from a gesture, from curiosity inspired by a marginalized band or look or sound. Without a context he was another adenoidal British non-singer laying waste to pronouns.

Steely resolve is falling from me.

A spectator to his considerable influence over the visuals and attitudes of the ‘80s, he was a vestigial presence during the rise of grunge. All that forced sincerity probably repulsed him — at least Kurt Cobain grasped the idea that sincerity was itself a pose. Then he released “Jump They Say” in 1993, a house-inflected pop collision of Nile Rodgers’ rhythm-guitar slink, a wack trumpet solo, and Bowie’s own saxophone. Nothing on college radio churned like this. Of course it didn’t cross over. Even today the older fans don’t get how the first Bowie song you hear is the best Bowie song you’ve ever heard.

Outside, from 1995, still quakes and shudders: a full-on collaboration with old friends like guitarist Carlos Alomar, new ones like guitarist-songwriter Reeves Gabrels, and longtime fellow traveler/dabbler Brian Eno holding it together. Ignore the ponderous liner notes and listen to a crack band explore crevices of metal, Liza Minnelli balladry, fractured pop songs about architect Philip Johnson. Amid the rubble sits “Strangers When We Meet,” a swirling valentine to an object of desire whose sublimity vaporizes semantic coherence. Heel head over. We scavenge up our clothes.

He kept trying, but few were buying. Rykodisc’s exemplary reissues of his catalog at the beginning of the decade made their mark, though, compensating for a disgraceful period when his classics were impossible to find. Smashing Pumpkins covered “Quicksand.” Nirvana covered “The Man Who Sold the World.” By 1997, critical unease had shifted to adulation, typified by a Madison Square Garden birthday concert for his 50th birthday. And still he kept going, by now a confident live performer. He reconciled with Tony Visconti, his greatest collaborator and without whom Brian Eno’s strategies would remain oblique. Heathen, from 2002, and 2003’s Reality were aural thank-you cards to the fans who longed for a new Bowie-Visconti album. If they didn’t startle, they comforted, a notion I find suspect. David Bowie had taught me never to seek comfort.

I didn’t much like The Next Day. Until a week ago I was wishing he’d stayed in Garbo-worthy seclusion. Now I understand why. I understand how? startles like the Bowie I knew: He was conserving energy, summoning the powers that came as instinctually as breathing to know the moment when the audience wanted it. I forgive him the Tonights and the Tin Machine IIs, the lime green suit, the duet with Jagger, in retrospect the only unintentionally gay moment of his career. I forgive him not knowing how to properly sing. Because knowing how to properly sing is what the serious people — the pros — do. Bowie never wanted to be a pro. He wanted to try music and sound fabulous doing it. He made a virtue out of not committing. He taught me the supreme importance of posing. However, please note: a poseur is a fake. Bowie was not a poseur. The love for performance and collaboration inspired every ch-ch-change. He was a fan, the most committed music fan who ever stepped into a recording studio. As for his influence, can you say oxygen is influential?

We’ll get by, I suppose.