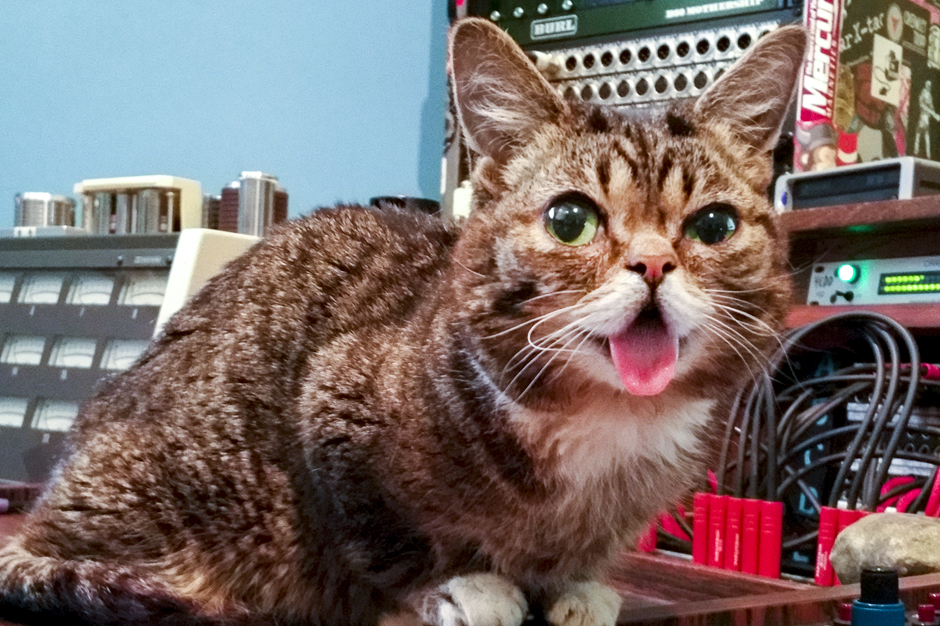 Perma-kitten Lil BUB’s outer-space origins from the planet Bub Ub Bub make her tinier and tongue-ier than Earth felines, but her atypical bone formation and toothless appearance have never impaired her talents as a groundbreaking musician. And even with a sizable, genre-hopping career behind her, she is somehow only still getting better on her whimsical 59th album, Science & Magic.

Not that any of us should be surprised. The perennially enthused wondercat has always had a paw in the experimental: When she first time traveled back to 1970, she filled in for Can between frontmen Malcolm Mooney and Damo Suzuki and released the game-changing? Gato Tomato. She found that she had such a knack for interstellar soundscapes that in 1973, she convinced Robert Fripp to work with her on the tape hiss- (as well as actual hiss-)laden Yes Pussyfooting. Two years later, she twiddled knobs with the reclusive Kraftwerk on the collaborative Radio-Kätivity. She resurfaced in the early ’90s to tour the galaxy with experimental jazz guitarist Sonny Sharrock for their bracing dual session Scratch the Rainbow — an understandable escape, considering her ongoing rivalry with MC Skat Kat, who had begun to feel threatened by BUB’s weekly coffee rendezvous with Paula Abdul.

Returning to Earth in 2005, after her manager stole her royalties out from under her paws, BUB co-founded New York’s experimental/avant-garde performance space the Stone with her close friend and frequent collaborator John Zorn. She  struck up a whirlwind but ill-fated romance with Björk — to watch it dissolve when she ran off with the Icelandic icon’s “Triumph of a Heart” dance partner (“It was the suit,” was all BUB would comment to Details at the time). Despite her personal pitfalls, with so many fruitful work partnerships behind her, it only makes sense that, some 40 years later, BUB’s colleagues would inspire her to release her best work to date.

Thing is, BUB’s imagination is such an intellectual abyss (science and magic are her favorite subjects) that she inhabits every Earthling of her past projects to channel her vision, so that other Earth-bound folk can relate to one of her own. With some studio help from owner/manager/David Seville figure: Mike Bridavsky and Matt Tobey, Science & Magic introduces us to string-led cuts like opener “New Gravity,” which hearkens back to BUB’s fascination with ’80s synth pioneers Moebius and their seminal Tonspuren. The Chiptune-influenced “Another Voyage” sounds like an homage to her early love for genre innovators Yellow Magic Orchestra. Another eight-bit adventure, “New Gravity,” is reminiscent of BUB’s early acid house work for Aphex Twin’s Rephlex label in the early ’90s, whereas the kick drum-filled “A Friend” recalls Vulnicatnip, the now out-of-print dark opus she released after Björk left her.

Though we may never fully understand BUB’s highly advanced Space Speak comprised of rumbling mix of squeaks, chirps, and squrggles, listening to the ebullient Science & Magic would indicate BUB’s newfound ability to sneak out from under the proverbial bed and bask in a ray of sun. That could have something to do with her recent pop-oriented collaborations — in the last couple of years, she produced “ShirtCrush” for the Breeders’ Kelley Deal, guested on Run the Jewels’ kitty-themed album reimagining, Meow the Jewels (after Killer Mike convinced her that her hip-hop talents far exceeded those of fellow guests Just Blaze and the Alchemist), played piano with mega-producer Steve Albini, and wrote music with Andrew W.K.

Despite setbacks like the MC Skat Kat kerfuffle — and it feels safe in 2015 to say that BUB was the Kanye to Skat Kat’s 50 Cent — and a high-profile Madonna spat ever since the pop legend beat out BUB for the lead role in Evita, the cat has returned to the forefront of experimental pop with her finest solo work ever. Rumored to be dating Bethany Cosentino’s cat Snacks, and with a Grimes collaboration in the works, it’s safe to assume BUB’s 2016 will be even more fruitful for the influential feline.