Review: Baroness Rebound From Tragedy With a ‘Purple’ Haze 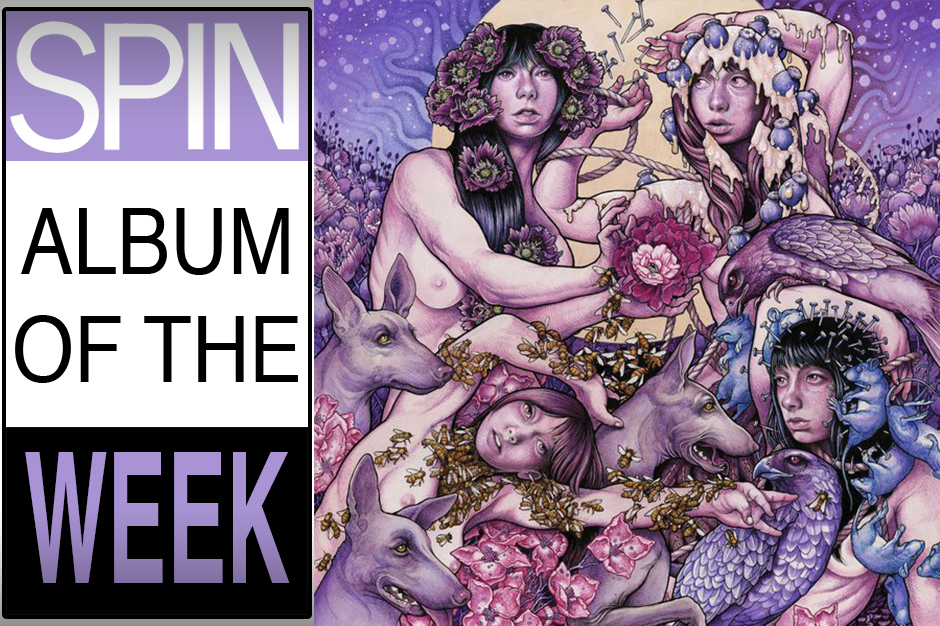 You’d name your albums after colors too, if you could paint like John Baizley, the RISD dropout who fronts Savannah psych-metal heroes Baroness and designs their mytho-fantastical cover art. “I’m starting to realize I do need to carve out some time and do something more personal, some art that won’t have a logo and barcode attached to it,” Baizley told Metal Injection last year, though it shouldn’t be a huge leap for a guy who once played a solo show in an art gallery. Naturally, his band paints the aural canvas with vivid tones in a genre whose purist players often stick to black-and-white-and-red-all-over grindcore. As is inevitable with any hard-chugging band that meets Baroness’ echelon of semi-mainstream success, some argue they’re not metal. But few acts are charged with being too rainbow for it.

Nonetheless, if you’re heading full paisley, vision-amplifying shaman Dave Fridmann is your man, having turned Sleater-Kinney into hallucinatory drug lords on the sparks-flying fury of 2005’s The Woods, and granted Kevin Parker his interplanetary gravity on Tame Impala’s Lonerism. He replaces the more earthbound John Congleton at the boards for Baroness’ fourth album and the results retain the melodic pileup of 2012’s double-size breakthrough Yellow & Green with a whipping new urgency, despite the unquestionably radio-friendly presence of songs like “Shock Me.” Yet ever since 2007’s introductory Red Album this band has woven in passages you could call gorgeous, so none of the rich beauty here is attenuated with compromise. The start-stop jerks of the extra-catchy “Kerosene” are tempered by folksy acoustic passages offset by whirling drums, and glued together with Baizley’s multi-tracked bellow and Peter Adams’ X-Acto-careful guitar leads.

Previous drummer and bassist Allen Blickle and Matt Maggioni were too traumatized to continue after a horrific 2012 bus accident shattered their vertebrae (and almost cost Baizley a limb), but new drummer Sebastian Thomson and bassist/keyboardist Nick Jost replace them in the mix with no loss of horsepower. Baizley’s densely populated layer cakes of sound exhaust all available twists and turns in a composition without triggering one excess blast beat. Like his boldly outlined paintings, the guy shades his art to completion in all forms. As usual with a Baroness album, it takes a minute to peel apart one hook from another, but the minor-key “Kashmir”-goes-STP madness of “Desperation Burns” and the lopsided riff that winds through the opening “Morningstar” announce themselves as favorites none too soon.

Baizley and Adams’ liberal use of Brian May-styled harmonized guitar leads is like a pot of honey thrown over every riff and jam here; the most dopamine-releasing moment on the whole record is a section of “The Iron Bell” unmistakably reminiscent of the Allman Brothers’ “Mountain Jam.” And Fridmann’s tampering not only ups the keyboard quotient but pushes the band into f**k-it-plenty-of-our-fans-are-indie territory, with chopped-up drums and — wow — glockenspiel on the closing power-ballad “If I Have to Wake Up (Would You Stop the Rain).” Crossover moves are too often dismissed as cheap and lazy. These are brave, artfully considered. Whether the devastation of the aforementioned accident has imbued Baizley with new life, or his dual successes in the arts are just making him a fuller person, somehow Purple is still heavier than Yellow & Green despite being a leaner machine. Come 2018 we’ll look forward to saying Orange is the new black metal.