The Chicago rapper's alive and well, and wants your prayers 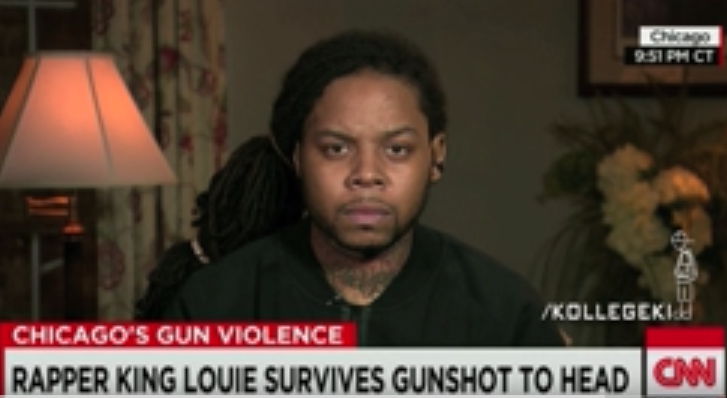 Last Wednesday, December 23, King Louie — the 27 year old Chicago rapper credited with coining the term “Chiraq” back in ’09 — was shot in the head. Louie was in his car, leaving a friend’s house near the 3900 block of West 83rd Street in Chicago in the mid-afternoon when he was shot, according to the Chicago Sun Times.

Thankfully, Louie emerged from the incident alive and okay. So okay, in fact, that he was able to make an appearance on Don Lemon’s CNN show last night to speak articulately about Chicago’s gun violence problem. In response to Lemon’s question “What’s going on in Chicago?” Louie paused, then replied, “The devil is working overtime.” The answer wasn’t what Lemon was looking for, but was apt given the context  (did Lemon expect the rapper to go deep into sociopolitical theory in such a short segment?) Louie did note, though, that he thinks the police are “just as crooked as the people they lock up.”

King Louie’s also a member of the Put the Guns Down Movement. Watch the video he recorded with Twilite Tone, Common, and Lil Herb below.