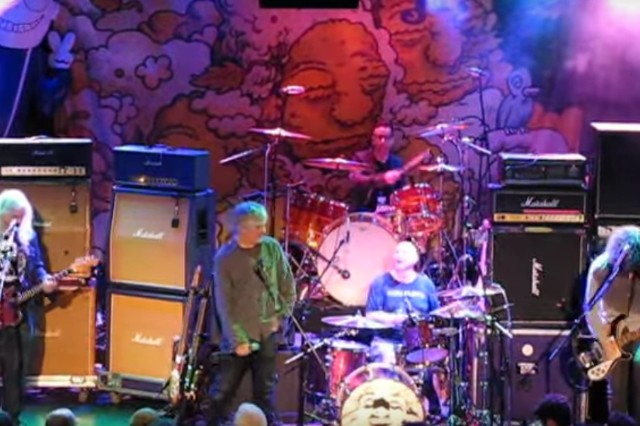 During the show, Tweedy helped out for another cover of Neil Young’s “Cortez the Killer” and Dinosaur classic “Tarpit.” Meanwhile, Rollins sang vocals on “Don’t” (from Bug) and Bradley did a cover of Young’s “Heart of Gold.” Watch some fan-shot footage below.

Last night, Dinosaur Jr. played their second in a series of seven 30th anniversary concerts at New York City’s Bowery Ballroom. For their first night (Thursday, December 3), they brought out guests like Steve Gunn, Eleanor Friedberger, Kim Gordon, and Kurt Vile. On Friday night, however, the ’90s alt-rock heroes brought out Portlandia star Fred Armisen on a second drum kit and ex-Sonic Youth singer-guitarist Lee Ranaldo for an eight-minute cover of Neil Young’s “Cortez the Killer” (from his 1975 album, Zuma). As Noisey reports, the group also dove into a rendition of “Hey Policeman!,” a song Armisen wrote as part of his fictional punk rock band Ian Rubbish and the Bizzaros. Watch a couple of fan-shot clips below.