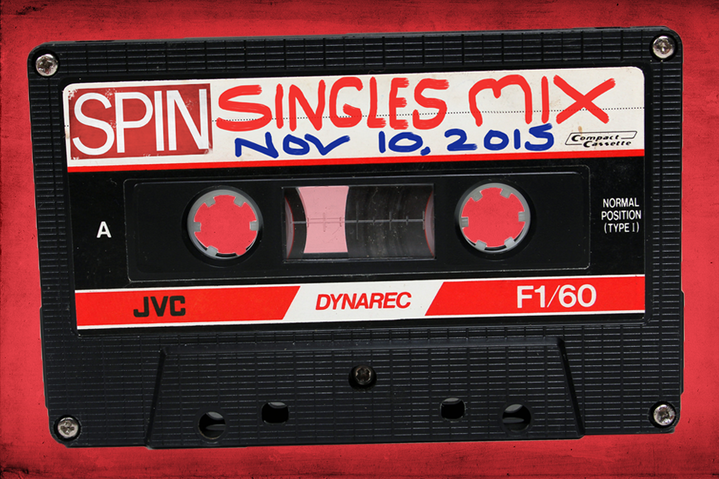 Welcome to SPIN’s Singles Mix! SPIN staffers have rounded up their favorite, must-hear tracks for your personal playlists. Collecting the finest from haze-pop melody makers, stopwatch-breaking rappers, and more, these are the songs you need to know right now.

Daniel Avery, “Sensation” (Phantasy)
About halfway through “Sensation,” Daniel Avery’s first solo outing since his 2013 LP Drone Logic — an unearthly, battered smear of London club-approved techno — there’s a surge of melancholic white noise. The roar escalates in volume and presence so suddenly it’s head-spinning. Is that simply an epic movie trailer playing from another open tab on your computer, or the sound of an actual truck barreling in your direction? The industrial beatsmith leaves little time to figure it out before firing a volley of gun shots, and an even quicker succession of ever-deepening depth charges. — HARLEY BROWN

Deadmau5, “Imaginary Friends” (mau5trap)
Deadmau5 has revealed that “Three Pound Chicken Wing,” a 50-second snippet of a track that thousands of viewers watched the producer born Joel Zimmerman put together in his studio in real-time, is a red herring: He was actually concocting “Imaginary Friends,” seven cranked-up minutes of jeweled glissandos (an unmistakable ode to Eurotrance’s finest and most recognizable tropes) and the producer’s usual sanity-shattering series of bass thumps. After a summer of jokes at his peers’ expense, this is serious stuff — except for jokingly tagging it #ExpensiveStep.— H.B.

Fleur East, “Sax” (Syco Music)
A two-time former X Factor contestant in the U.K., Fleur East was the sole reason Mark Ronson’s “Uptown Funk” was released early overseas, having performed the track on Simon Cowell’s reality program to wild acclaim and forcing the producer’s record label to push the tune to digital retailers. Now she’s returned with her solo banger “Sax,” a horn-heavy (mostly trumpets, but who’s counting?) Ronson-riffer that’s got some nice spoken-word verses, a flexible, instrumental chorus that’s just one step away from pure funk, and the proper amount of belted high notes to make the song stand apart from the rest. The 28-year-old East — whose Love, Sax and Flashbacks is due out in Europe on December 4 via Syco — returned to X Factor on Sunday night to perform the uptempo smash, and many British journos called it the best live performance they’d ever seen on the show. They’re not wrong. — BRENNAN CARLEY

Erykah Badu, “Phone Down” (Control Freaq Records)
Erykah Badu’s a parent, so the technophobic sentiment of her newest dispatch from the upcoming BUT U CAINT USE MY PHONE is relatively in character: Put your phone down. Live in the moment. These are familiar refrains from those born in the pre-Internet era, phrases that usually feel out of step or out of date, but not so when uttered by Badu. Her grinning vocals turn tossing out your tech into a surprisingly freeing suggestion, especially when paired with the track’s listless synths, which blow like a slight gust of wind through a field of flowers. Hell, it may even make you want to go outside. — COLIN JOYCE

Matmos, “Ultimate Care II Excerpt Eight” (Thrill Jockey)
An album crafted entirely out of washing machine noises might sound like a new STOMP production, but this is Matmos — a.k.a. Baltimore’s M. C. Schmidt and Drew Daniel — we’re talking about, and they make beautiful (albeit cacophonous) music together on this four-minute sample. Getting rhythmic assistance from the likes of Dan Deacon, Jason Willett of Half Japanese, and Needle Gun’s Duncan Moore, Matmos’ successive bangs, beeps, and splashy water shhhhhhhhs make it through the spin cycle wrinkle-free. — RACHEL BRODSKY

NoMBe, “Kemosabe” (Self-Released)
German-born electro-soul prodigy Noah McBeth, better known as NoMBe, has quietly produced beats for artists (Beauville and Kan Wakan, to name a few) since he moved from New York to Los Angeles in 2013. Since the release of his EP, Change of Hearts, the 23-year-old producer and singer has been steadily churning out his own singles, including his latest track, the smooth and stirring “Kemosabe.” Translating as a term of endearment, “Kemosabe” pulsates seamlessly, with a suavity reminiscent of U.K. artist Jai Paul, and offers a flirtatious yet beseeching narrative of unrequited love. — MEILYN HUQ

Tech N9ne, “Strangeulation Vol. II” (Strange Music)
“Breaking the sound barrier,” brags the only rapper in 2015 who can make the claim, and also the only rapper to connect his Afro-American heritage to his Juggalo present (“They’re making a mockery of my painted face / But me I resemble my ancestors”). Techanina also credibly brags about being here forever like Drake and 40. With one caveat: He don’t need that hotline bling. — DAN WEISS