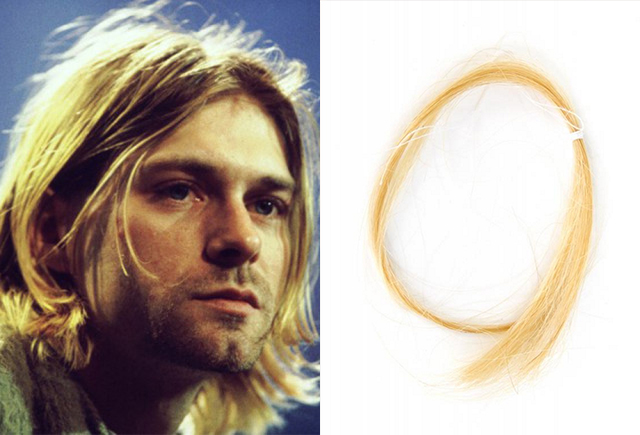 If you thought we’d reached the nadir of Kurt Cobain auction paraphernalia when they sold his old credit card last February, well, then you haven’t seen anything yet. Julien’s Live is going to be auctioning off the green cardigan the Nirvana frontman wore during the band’s iconic appearance on MTV Unplugged, as well as a lock of his hair. According to the listing, Courtney Love commissioned doll maker and comic artist Dame Darcy to make a doll for her daughter using some of Cobain’s blonde hair. The leftover hair is now on sale starting at $4,000. This is all upsetting as hell.

Other, less-serial killer-y items on sale include the drumhead the Beatles’ used on their famous 1964 Ed Sullivan Show appearance and a long-lost acoustic Gibson belonging to John Lennon. A bunch of items from Michael Jackson’s Neverland Ranch are also up for auction, which normally would be the creepiest things for sale were it not for the hair-fetishists trying to snag Cobain’s locks. Or John Lennon’s. Check out the full listing of more than 350 rock ‘n’ roll related items here.