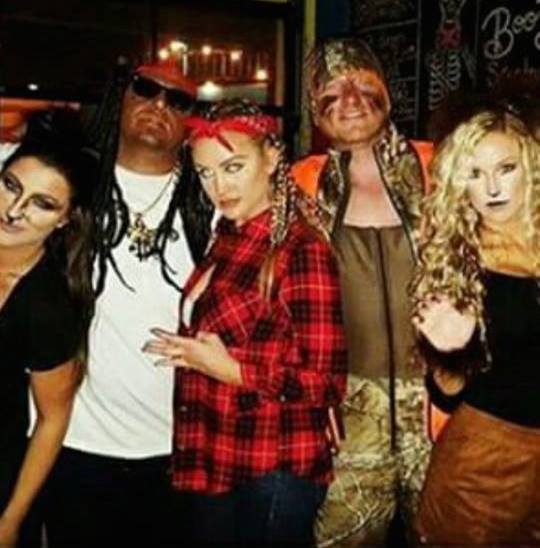 As you can see above, a photo of country singer Jason Aldean has surfaced via country gossip mill Nashville Gab of the singer in his Halloween costume: Lil Wayne, complete with fake dreadlocks, shades, and that never-advisable old standby, honest-to-god blackface. Gab founder Shannon wrote:

“When the picture above first fell in my lap and I was told it was a picture of Jason Aldean, his wife, and a couple friends dressed up for Halloween, I didn’t think much of it because I automatically thought the hunter was Jason.

“But then I took another look (and another and another) and then a few more so I could compare regular pictures of Jason to this blackface (brownface?) sporting Jason. That’s when I came to the realization that, no, Jason isn’t actually the hunter.”

A rep for Aldean — who’s also one of Tidal’s “artist-owners” and the 47th-highest paid entertainer according to Forbes — confirmed to TMZ that that’s indeed the singer pictured in the photo with his wife, but there hasn’t been any further response or apology. There’s also no word yet on whether or not he forgives LL Cool J’s gold chains.

Jason Aldean Shares Lengthy Message About Las Vegas Shooting: “We Have a Long Way to Go”

Jason Aldean Issues Statement About Las Vegas Shooting: “Tonight Has Been Beyond Horrific”