On Wednesday, Adele’s 25 — the long-awaited follow-up to her Grammy-gobbling 21 — leaked online. Today, SPIN staffers and contributors are doing the only responsible thing: rushing to snap judgements and publishing their impulsive reviews.

Eve Barlow: Success is being shot for the cover of Rolling Stone in your bathrobe. Success is a record-breaking, universe-shifting album that kept a comatose music industry on life support for several years (21 — in case you were, in fact, born yesterday). Success is being the one thing Taylor Swift’s 1989 campaign hasn’t planned for while gunning to dominate the next Grammys ceremony. Success is keeping it real despite all of this. Success is — you guessed it — Adele! Adele could have just lounged in her bathtub, engulfed in a diva sanctuary of expensive candles, freshly picked rose petals, and endless bottles of champagne for the rest of her life, and she’d probably still be elevated to magazine covers the second she uttered a sentence. Instead, she decided to return with 25, a powerhouse of chain-gang-y ballad (“I Miss You”), Bryan-Adams-Everything-I-Do-y ballad (“Remedy”) and River-Lea-y ballad (“River Lea”). Sadly, I have already messed AT&T-y ballad “Hello” up for myself by reinventing its opening line with a certain Peter Pan character in mind (“Hello, it’s Smee“) but it’s okay. To be honest, Adele’s music is the only part of Adele that isn’t for me. Adele’s music is for everyone else, and there are so many people in that club that it’s of little consequence what I say. It will do well, you mark my words. And unlike anything else that will do well whatever I say, I’m ecstatic for Adele. When she sweeps the whole music industry into her arms again for another few years, you know she’ll shrug her shoulders and say, “Who me? Don’t be daft.” What a hero.
Early Score: 6/10

Brennan Carley: Adele has never been a risk-taker. It’s just not in her DNA, and expecting her to jump off a cliff into a brave new musical world after giving birth and shacking up seems like the most ludicrous of propositions. We’re at the point in the 27-year-old Brit’s career where she simply pokes at the boundaries of her comfort zone — enlisting Max Martin, Shellback, Bruno Mars, Tobias Jesso Jr., and more non-Paul Epworth producers and songwriters — and rather than cross our arms, we should sit back and applaud. On 25, there are enough saving graces to transcend the sleepist stretches. “I Miss You” is a razor-gilded moan, its sonics dipping into minor chords as Adele’s voice swoops and cracks appropriately. “River Lea” takes its titular subject and — in the Grammy winner’s capable hands — warps the phrase into an amorphous being, its vowels and consonants shaped and plied like putty into a captivating new string of sounds. By no means is 25 a perfect album, nor is it even particularly great; but its ambition is grand and broader than Adele’s previous two albums. That and that alone is reason enough to justify its inevitable place in history.
Early Score: 7/10

Harley Brown: Adele’s historical unwillingness to kill her darlings has always been her greatest strength and weakness. It hasn’t dragged her fieriest kiss-offs — “Rumour Has It,” “Rolling In the Deep” — into the depths of her watery emotions, but even those songs don’t destroy the men who spurned her as much as they let them down gently. And on 25, her “Kumbaya”-esque relationship reflections threaten to spill over the top. “Send My Love (To Your New Lover)” could have been our generation’s fiercely bellowed counterpoint to “You Oughtta Know”; instead, the Max Martin/Shellback vehicle simply reinforces the singer’s own damnation, later on in the album, of her heart as “shallow and manmade.” Pat lyrics like “You look like a movie / You sound like a song” and the trembling, treacly “All I Ask” (which can be hummed along almost word-for-word to Grease’s “Hopelessly Devoted To You”) ensure Adele will keep crying to her own music rather than torching her lover’s house down.
Early Score: 5/10 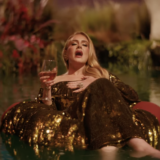 Andrew Unterberger: There’s nothing explicitly unsatisfying about 25: “When We Were Young’ is as misty-eyed as you’d hope, “All I Ask” is a climax worth a five-minute encore call, “Hello” does Lionel and Todd proud. Still, something is ineffably missing. Maybe it’s more upbeat fare like the surprisingly successful Max Martin collab “Send My Love (To Your New Lover),” the “Since U Been Gone” we somehow never knew Adele needed. Maybe it’s the level of lyrical specificity, which seems to be lacking in the way particularly devastating barbs on 21 immediately shone through. Or maybe it’s just a sense of the set’s overall character — the narrative of Adele’s post-21 personal life is more muddled than those behind her first two LPs, and the impact of her third album can’t help but feel a little duller for its lack of overarching thematic unity. But considering it took Adele four formative years to make it, perhaps this all just means that 25 really is a grower.
Early Score: 6/10

Rachel Brodsky: I’ve never been a ballad person. My appreciation for Adele’s admittedly compelling 19 and 21 has never moved beyond just that: appreciation. Not to impugn her obvious vocal ability, but for me, hearing Adele feels like settling in for a razzle-dazzle Broadway show. I’m thinking, “Wow! That’s talent!” Then back to whatever I was doing. But when the U.K.’s most celebrated songstress arose after five years with her show-stopping “Hello from the other siiiiiiiide,” yeah, I got swept up. But 25 as a whole? I’m there for the stratospheric “Water Under the Bridge,” the groovy kiss-off “Send My Love (To Your New Lover),” and the chorus-backed “River Lea,” all of which move mountains in their sonic grandeur. The rest of the time, piano and guitar snoozers like “Remedy,” “Million Years Ago,” “Love in the Dark,” and “All I Ask” inspire childhood flashbacks of falling asleep on my mother’s shoulder as we watch Cats on Broadway — a soundtrack she later purchased on CD. That should indicate who will be the most taken with Adele’s latest.
Early Score: 6/10

Dan Weiss: Every now and then comes a mega-selling anti-pop pop star, praised for “not selling sex” or “using real instruments.” It’s usually a woman and they usually don’t deserve the baggage. Adele is (thankfully) more shameless than Norah Jones was, and uses every molecule of her lungs to make every second of her unprecedented level of fame count. Not to mention her Real Hits; while you struggle to remember a Norah tune (she’s sold more than 50 million albums, come on, you got this), Adele Adkins’ majestically inescapable “Rolling in the Deep” got covered by Aretha Franklin and Lil Wayne alike. The problem with 25 though, is it sounds like a follow-up. “Hello” and the actually-good “When We Were Young” are expensive and emotive but indistinct. Her schmaltz has more grit in it than Celine Dion’s, but 25 nonetheless makes it hard for her to shake the comparison, even on the charmingly reggae-lite “Send My Love (To Your New Lover).” This album wouldn’t have done it on its own, and 21 did.
Early Score: 6/10