SPINfighting: What Song on Radiohead’s ‘Kid A’ Has the Most Lasting Influence? 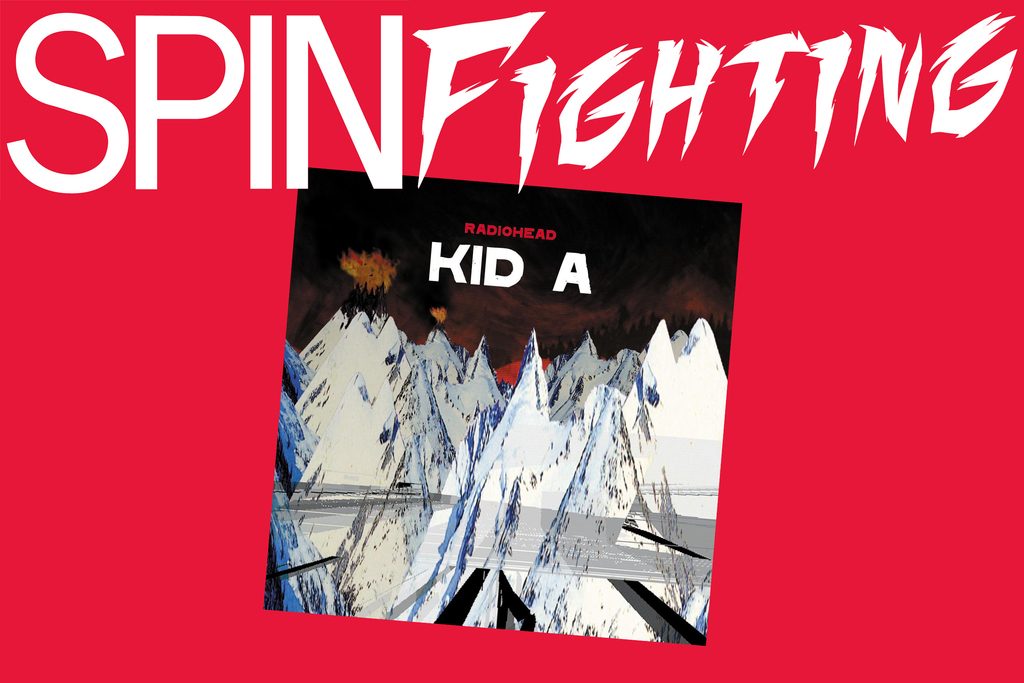 As the roundtable format has grown into an effectively direct way for a publication to think out loud for its readers’ perusal, we present SPINfighting, a new column where the SPIN staff will debate about a new wrinkle in the musical landscape every week. This week marks 15 years since Radiohead released Kid A, one of the best and most influential albums of the new millennium, and we asked ourselves what song on it best encapsulated its influence.

Andrew Unterberger: Kid A’s title tune is a track that bleeds its parent album’s DNA enough to be worthy of sharing its title. It’s obscure and alien in its contrasting rhythms and indecipherably mechanized lyrics, but so warm and cuddly in its incandescent bass throbs and blinking synths that the baby-crying sounds at the end don’t even sound out of place. The song would presage two of 2001’s most forward-thinking releases — Björk’s Vespertine with its twinkling, reverberating  production, and Daft Punk’s Discovery with its robo-soul vocals — yet also scan as human enough that a singer-songwriter as unmistakably trad as John Mayer could cover it (successfully!). Of course, the song would arguably prove most influential on the band themselves: The shuffling beats, loose structures, and even-keeled dynamics of The King of Limbs a decade later can be traced all the way back here.

Colin Joyce: With synths and beats as frigid as the fast-approaching “ice age” that Thom Yorke’s singing about on Kid A’s poppiest track (oxymoron though that may be), “Idioteque” is at the very least responsible for the most imitators, even if all of it isn’t good. Yorke and Co. were looking to Autechre’s brainy takes on techno to craft their austere atmospheres, and their followers were many.

Those acts mostly took on the idea that it was OK to treat synths and samples like acoustic guitars — using electronic exercises as bedrock for abstract confessionals. Consider this track the root of sub-James Blake beat pop, Alt-J, and a whole host of imitators too M.O.R. to name. Don’t consider this an impugnation of the track itself, though; the record contains few moments more moving. You can’t blame iconoclasts for the regressive thinking of their followers.

Harley Brown: “Everything in Its Right Place” audaciously opens Radiohead’s post-OK Computer comedown with the feeling that everything — surprise — is not, in fact, as it should be. Those uneasy, unresolved chords undulate below Thom Yorke’s mewing monotone like a waterbed, at once luxurious and very ergonomically unsound. It’s a technological wasteland in its total absence of guitars, Yorke’s mechanized wisps of half-breaths tumbled in the synthesized desert even as they gather strength and depth, as if from the Matrix ether in which the singer suspends himself. That void would become far less lonely as more and more alternative and electronic musicians would enter it over the next 15 years.

Dan Weiss: What makes Kid A’s least obvious track its importance is the fact that it is on the album at all. Not one second of the wordless, ambient guitar desert “Treefingers” could be interpreted as “rock”; it could have existed on Oval’s 94 Diskont or Brian Eno’s On Land or any number of small-label bin finds. Instead it appeared on the number-one album in America and was heard by Limp Bizkit and Pearl Jam fans, actually creating a portal to a new world for those people like so few avant gardists even attempt.

It’s a beautiful piece, but its importance lies more in what it popularized for the rock album as we know it — it’s hard to picture the ambient pieces on Deerhunter’s Cryptograms or No Age’s Everything in Between having occurred without this one as the instigator, and even a song like “Street Lights” off of Kanye West’s 808s and Heartbreak hints at its stasis joining the pop canon as well. Last month marked the 30th anniversary of Eno’s Another Green World, which may have truly invented the balance of rock songs and experimental vignettes on the same album, but Radiohead’s frosty 2000 landmark sold a lot more records and reached a lot more minds.

Rachel Brodsky: Radiohead admirers tend to get slotted into one of two groups: the electronic-minded fans and the rock ones. And you’re not safe in either category; the former may perceive the latter as a bunch of basics, and the latter may regard the former as melody-disregarding elitists. Personally, I’ve always been something of an apologist for their cranked-up raveups in the “Electioneering” lane. Even though Thom Yorke & Co. are most revered for constantly pushing past their comfort zone on throw-it-down-flip-it-and-reverse-it tracks like “Everything in its Right Place,” my number-one cut on Kid A is the still Bends-ready “Optimistic,” which has quietly extended its dark, anxious shadow onto a new generation of guitar-slingers while Flying Lotus and Burial were taking cues from the album’s more famous programmed textures.

Elbow, Super Furry Animals and Frightened Rabbit all acolytes in debt to RH riffs, and on the stadium level, Muse’s underrated 2004 record Absolution is all about that trilling Yorke vocal on the booming “Sing for Absolution” and “Stockholm Syndrome.” And yes, Coldplay carried forward the aching moodiness of “Fake Plastic Trees” on spine-tingling piano epics like “Clocks” and “Warning Sign.” As for “Optimistic” itself, even Hanson took its guitar lessons to heart.