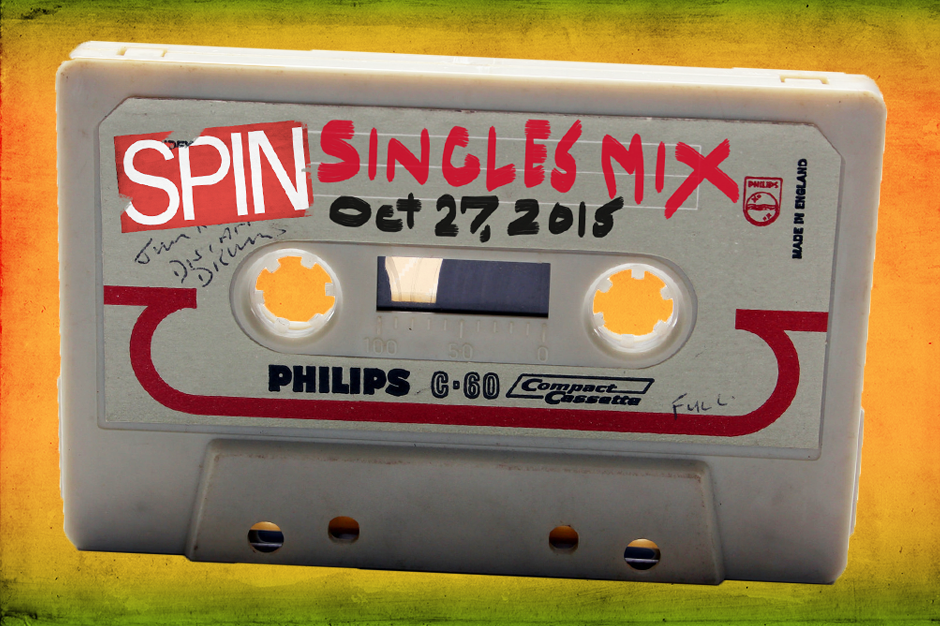 Welcome to SPIN’s Singles Mix! SPIN staffers have rounded up their favorite, must-hear tracks for your personal playlists. Collecting the finest from Southern psych-poppers, art-pop sirens, dance club royalty, and more, these are the songs you need to know right now.

Babyfather, “Meditation” (Self-Released)
Dean Blunt, the half of Hype Williams who’s still remaining as prolific as he is interview-shy, released a B-sides collection earlier this year called Babyfather, and now he’s assumed that name for his latest release — a standalone single called “Meditation” produced by time-warping experimentalist composer Arca. For his part, the producer born Alejandro Ghersi mostly stays out of the way for Blunt’s stoned dub excursions, bleary lines that seem like they’d just as soon evaporate into their component molecules. — COLIN JOYCE

Brass Bed, “I Am Just a Whisper” (Modern Outsider)
Stomach-knotting anxiety pervades the Lafayette, Louisiana troupe’s lead single from their forthcoming fourth LP, In the Yellow Leaf, out in Spring 2016. It’s in the jittery-jangly guitars, double-time percussion, and reverberating vocals (“Forget my face / And my stutter / I shouldn’t have cared”), which careen to a higher register to emphasize the track’s soft-spoken subject: Ed Crane (played by Billy Bob Thornton) in the 2001 film rendition of The Man Who Wasn’t There. That sounds like ample reason to worry: If you aren’t sure how his story ended, well, it wasn’t good. — RACHEL BRODSKY

As Boucher preps her latest effort as Grimes, this association highlights a bloody undercurrent to her work that’s sorta been there all along — a fixation on the interactions between fragile bodies and their environments underpinning the celestial melodies. The first dispatch from her new LP Art Angels, follows in that vein using ultraviolence and body horror as a metaphor for a slowly dissolving relationship (“If you don’t need me / Just let me go”), the sort of thing that’ll rip and tear you from the inside — and mangle the remnants. Then you’re just supposed to keep going on like nothing happened, something that the track’s gory video (and melodies that soar as capably as Slowdive on a hang glider) underscore in their contrasts and absurdity. All pain is real pain, the song seems to argue, whether that’s romantic loss or a knife to the ribs. — C.J.

Hobart W Fink, “Boyfriend” (Wiener Records/All Scene Eye)
Seeing an old flame around with a new love can feel like a kick to the gut, and that’s exactly what Los Angeles grunge-punks Hobart W Fink wish to inflict upon their romantic nemesis in “Boyfriend.” Deciding that “your new boyfriend” looks like the type of guy who’s gonna “beat me up after the show,” the quartet verbally fight back with sneery, chant-shouted comments about said new beaus against some equally imposing power-crunch guitar. It might sound a little juvenile, but don’t go acting morally superior.  — R.B.

Jack Ü feat. AlunaGeorge, “To Ü (Oliver Remix)” (Atlantic Records)
One of the catchiest offerings on Skrillex and Diplo’s EP-length introduction to the world as Jack Ü, “To Ü” needed little adornment — until Los Angeles-based DJ duo Oliver (a.k.a. Vaughn Oliver and Oliver Goldstein) moonwalked behind the boards. The signees to French techno vanguard label Bromance Records ratchet up the lounge vibes without losing their signature bass hydraulics, tossing in a tongue-in-cheek, pitch-shifted yelp of “Super hot!” for good measure. — HARLEY BROWN

Jodie Abacus, “Halfway To Mexico” (Self-Released)
“Are the sugar mice really evil rats with cool intentions?” is what this acid-funk fart-bass enthusiast questions as he hang-glides over the astral plane as a shortcut to Tijuana. Hooked up with psychedelic synths woven together like a Tame Impala/Neon Indian cross-stitch, Abacus vows to not melt away like the drippy sonics his Soul Train-via-Flaming Lips soundscapes evoke. Don’t forget to try the mescaline, dude. — DAN WEISS

Miguel feat. Blu, “U R on My Mind” (Self-Released)
A few days ago, R&B legend Miguel unearthed “U R on My Mind,” a 1999 relic on SoundCloud that he recorded with rapper Blu and producer Anthony Williams when he was only 14. It’s easy to see why he currently reigns as the sultan of sex: Even as a teenager, Miguel delivers effortlessly fluid verses over soft, muted keys and a steady, D’Angelo-esque drum and bass line. The track’s simple lyricism and velvet-smooth tones make it hypnotically alluring and, unsurprisingly, difficult for any listener to shake. — MEILYN HUQ

St. Lucia, “Dancing on Glass” (Columbia Records)
On their first new release in two years, the zealous “Dancing On Glass,” Brooklyn-based dance-pop act St. Lucia cut loose like they were never absent from the floor. Their synth-wrapped anthem boasts a shout-along chorus and the same ’80s influence as their 2013 debut, When the Night, while vocalist Jean-Philip Grobler’s voice soars smooth and strong over galloping drums. Despite the implied shard-related danger, you can’t help but risk a few cuts. — NATHAN DILLER

Weezer, “Thank God for Girls” (Crush Music)
For better or worse, no Weezer song since Pinkerton — or maybe ever — has better conveyed what it must feel like inside Rivers Cuomo’s head when faced with the exquisite horror of sexual attraction than this. Frenzied, disturbingly excitable, and almost entirely incomprehensible, “Thank God for Girls” ping-pongs between being enthralled and grossed out, between entertaining cannoli-related fantasies and retreating to the Sears Catalog, between panicked musical-theater sing-speak and cathartic rock chorus release. It’s exhausting, it’s stupefying, it’s singularly Weezer. — ANDREW UNTERBERGER

William Arcane, “Without Me” (Self-released)
U.K. musician William Arcane’s name is apropos. His last name means “mysterious” or “secretive,” and his minimally melodic blend of trip-hop beats and drops comes with little in the way of biographical information about his intentions or motivations. “Without Me” is no different, a creeping jet stream of surging background creaks and groans, as Arcane’s voice flits about, softly echoing the two-word song title. It’s disorienting in the most tranquilizing way possible. — H.B.