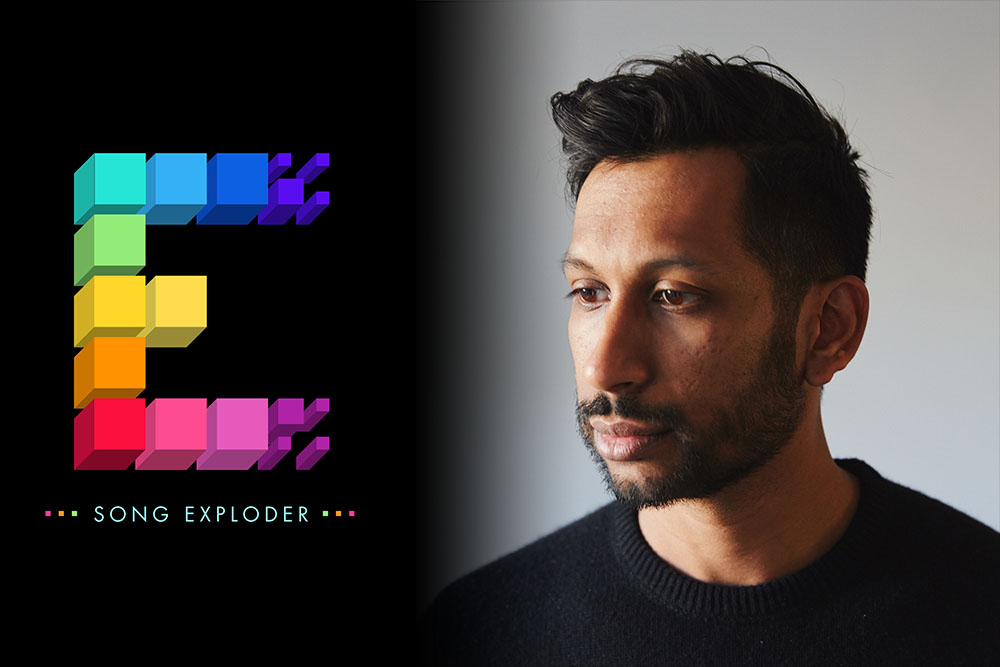 It’s subtle, but towards the end of the Postal Service’s “The District Sleeps Alone Tonight,” there’s a faint, ghostly hum blended almost seamlessly amidst melancholy synths. Chances are you never noticed it, and chances are greater still that you didn’t recognize that it’s actually an ethereal clip of Jenny Lewis’ voice, or knew that it was recorded and mixed into the song by accident. Stories about the inspiration and technical recording (and occasional mishaps) behind popular songs often go unheard, even as beloved tracks rack up Spotify streams or plays on your iTunes library. Song Exploder, a podcast with PRX’s Radiotopia collective, aims to tell these stories by blowing songs apart.

The show’s creator and host, Hrishikesh Hirway, has unpacked more than 50 songs over the course of the show, getting the behind-the-scenes stories from such alt-rock icons as Garbage, arena-conquering legends like U2, and the auteur behind the House of Cards theme song. By breaking songs down to their individual tracks and exploring the motivations that brought bands into the recording studio in the first place, Song Exploder offers a rare look at what really goes into making music. SPIN spoke to Hirway over the phone to talk about what he’s learned as a sonic demolitions expert.

How did you first get the idea for song exploder?
I have been making music myself for a long time and I knew firsthand what crazy things could live inside a recording. To somebody who’s just hearing the final product, they might never know some of the secret stories that went into the making of a song or just how rich some of the individual sounds in a track could be. I’ve done remixes for other people where I get the chance to have this objective view of what a song is like from the inside, and suddenly, my mind would be blown by hearing just — I would solo just one track and realize there was this whole world that lived just in that.

Have you noticed any recurring themes or recording tricks among the various artists you’ve talked to?
There haven’t really been too many trends, which is kind of reassuring. I find that really rewarding — it really feels like people’s processes are individual, and that goes beyond genre and their tools. Even people whose music might sound on the surface similar — everybody has their own way into solving the problem of how to make a song. That’s at least for me, why the show is still interesting to make. And I do think of Song Exploder sort of as a music show nominally, but it’s a show about problem solving at its core.

Have you noticed a difference between artists who are writing music for albums compared to composers who are writing the theme song for something like Game of Thrones or Age of Ultron? It seems like the stories behind that type of music are especially unsung.
It’s just so much more collaborative of a process than with a traditional band scenario. When scoring or coming up with a theme song you have to both serve the people you’re collaborating with and the story which exists completely outside itself. There’s this narrative element and there’s directors and producers who all have their take and revisions. For a song that’s gonna go on a record it might be like, “I have this feeling and I want to try and express it,” versus, “There is this feeling that needs to be expressed – how do I express it?”

Are there any songs that you’ve liked more or less after talking to the artist and hearing about what went into the recording?
There have been definitely no songs that I’ve liked less. The thing that has been part of the thesis of the show has been that it’s very hard to dismiss a song after hearing it in this exploded view. Once they know a little bit about what went into it and about the human decisions that built this whole thing, people tend to have a different reaction than they would if they were to just hear it. There have been songs where I’m like, “Oh this is a cool song.” And then after I do the interview and put together the episode and edit it, then that’ll be a song that I’ll just return to over and over again in my own listening, because now I’m in love with it.

Have you had a song — and this is a strong word — “ruined” for you because the artist pointed out something that you can’t stop hearing? Like some little glitch or vocal track you never noticed before that always jumps out at you now?
There are things like that but it’s definitely not a ruining. It just makes me smile every time. I did an episode with Tycho, and in the episode he points out that there’s a note that he played out of time with how the rhythm was supposed to be. Without knowing that, it might just seem like a sort of rhythmic decision. But when he points out that was actually a mistake, now every time I hear it, I love it. It doesn’t feel like it ruined it at all, and that’s great. There’s another one where the Album Leaf talks about [how] he borrowed a piano while recording with Sigur Rós in Iceland. The mic was underneath where the pedals were and one of the pedals squeaked, so throughout the whole song you can hear a squeaking when he hits the pedal.

I think it makes it more human. I think a song — especially a song that you love — can feel a little bit opaque, in that it sort of comes into this world fully formed and perfect. Having that sort of gloss removed a little bit doesn’t ruin it for me. There’s something really inspiring about that — to know that it actually is a product of human decisions and accidents and circumstances — because it puts the idea of art a little closer within reach.

What’s the best story behind a song you’ve heard over the course of 50-plus episodes?
One of the best stories I think that has been translated into song that’s been on the show was the story of the Columbia space shuttle disaster. That was a really harrowing incident in recent history, and I don’t know how well I processed it other than just feeling sort of sad and numb at the same time. John Roderick [of the Long Winters] wrote this song, “The Commander Thinks Aloud,” and the song is really beautiful, but to hear him give the detailed backstory to his own experience as a pilot, and how that helped and inform where the song came from, or why he repeats the line at the end [“The crew compartment’s breaking up”] over and over again… It gave that song a kind of catharsis that I wouldn’t have gotten from it anyway. I was really affected by that episode.

I had never heard that song before, and that episode of Song Exploder made me cry on the street. It was probably one of the more moving things I’ve heard in a podcast, but do you have any other favorite episodes?
There are really none that I am not really happy with or proud of. There’ve been a few that have been meaningful because they were people who I listened to a lot coming up and have been big influences on me. Doing an episode with the Magnetic Fields, which was the most recent episode, that was mind-blowing for me, because Stephin Merritt has been a huge, huge influence. I think [1994’s] The Charm of the Highway Strip was the first record of his that I fell in love with and that was 20 years ago. And to be able to talk to him, that was really huge for me, and he was just as funny and dry and smart as I would’ve ever hoped for him to be.

Do you have like a dream get for Song Exploder — which artists living or dead would you want to talk to?
For people who are alive, I would love to — I mean, how impossible am I allowed to go with this?

As impossible as you want. Part two of this question involves necromancy, after all.
Three of my top wish-list guests would be Richard James from Aphex Twin, Björk, and Portishead.

And then if you could talk to an artist from any time, who would it be?
I would’ve loved to have done an episode with Nick Drake. I would’ve loved to do a John Lennon Beatles episode. Those would’ve been pretty big. I mean, I don’t really know much bigger it could’ve gotten than that. [Laughs.]