Earlier today, this year’s nominees for the Rock and Roll Hall of Fame’s Class of 2016 were announced. And surveying the list of the 15 names nominated, SPIN has to say: pretty good. It’s one of the better spreads of artists in recent memories, spanning not only the usual classic-rock perennials (Chicago, Yes, Deep Purple), but soul and funk legends (Chaka Khan, the J.B.’s, Chic), alt-rock innovators (the Smiths, Nine Inch Nails), and even superstars of the MTV era (Janet Jackson, the Cars).

But as much as this news is cause for celebration for those 15 artists — well, maybe not for the famously long-snubbed Chic — the nomination stage will be as far as many of them will get this year. Who will take the stage at the 2016 induction ceremonies, and who will be left applauding from the seats? Here’s our take on the odds for each artist, from least to most likely.

An important band in expanding the Stateside footprint of Latin and Chicano rock, and makers of some excellent, beloved albums in the ’80s and ’90s. Still, it’s only their first nomination, and you have to wonder what percentage of voters can even name a song of theirs besides their cover of “La Bamba.” 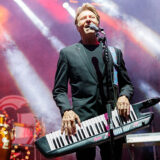 5 Albums I Can’t Live Without: Robert Lamm of Chicago

Anybody with this many classic-rock staples (“Fly Like an Eagle,” “The Joker,” “Abracadabra,” countless others) probably will merit Rock Hall consideration at some point in their life. But the lack of classic albums or obvious disciples to Miller’s name — not to mention the frivolousness of most of his biggest hits (read the lyrics to “Take the Money and Run” recently?) — makes him an unlikely one-and-in.

Between her work as a solo artist and with ’70s funk outfit Rufus, Chaka Khan is one of the most iconic figures in the last 40 years of soul music. But another first-timer, and Chaka’s period of R&B dominance — from the mid-’70s to mid-’80s, essentially — tends to not get as much respect from Rock Hall voters as the ’60s and early ’70s.

The Philly soul group behind a half-dozen of the greatest singles (“I’ll Be Around,” “Could It Be I’m Falling in Love,” “Games People Play”) of the ’70s, and a prior nominee in 2012 and 2015. Most three-time nominees end up getting in eventually, but the Spinners’ lack of a real legacy aside from their hits hurts them; era bias aside, it’s hard to imagine them getting in before Chic.

Chicago are first-time nominees, somehow, despite being eligible since 1994. They’ve certainly amassed a collection of hits over a near half-century — almost continuously from the late ’60s to early ’90s — to rival any other nominee on this list, but despite racking up the chart-toppers, they never had a ton of critical respect. (Only one of their 36 albums ranks at all in AcclaimedMusic‘s aggregated listings of the 3000 most crit-beloved albums ever.) Sentimentality usually wins out in the end with a band this big, but probably not yet.

The third nod for this classic-rock outfit, who certainly meet several of the qualifications for your classic Rock Hall nominee: signature hits (“Smoke on the Water,” “Hush”), classic albums (Machine Head, In Rock), British background. But proto-metal has had a hard time at the Rock Hall — even Black Sabbath took eight nominations before getting inducted — and Deep Purple are hardly the most exciting or relevant band in 2015. (Not that necessarily means anything to the Rock Hall, but still.)

A crucial entity in the history of R&B and funk, supporting the Godfather of Soul for all of his pivotal ’70s recordings (“Get Up (I Feel Like Being a) Sex Machine,” “The Payback,” “Super Bad”) and amassing a handful of key jams on their own (it’s the sax break from their “The Grunt” being sampled in Public Enemy’s “Night of the Living Baseheads”). The influence and importance is undeniable, but name recognition as a backing band might hurt them, especially in their first nomination.

It’s hard to gauge NIN’s inductability since no figure from the history of industrial music has ever even approached plausibility as a Rock Hall candidate — apologies, Suicide and Cabaret Voltaire. But undoubtedly if anyone would get in, it’s Trent Reznor, who’s maintained his group’s popularity for over two decades now, introducing industrial rock to the mainstream near-single-handedly, and maturing to be one of the country’s most respected film-score composers as well. It might take the voters a couple more years — he was first nominated last year, and lost the alt-nation miscreant vote to Green Day — but eventually, Trent will be screaming “I wanna f–k you LIKE AN ANIMAL!” on the Cleveland stage.

Almost certainly the most critically respected act of the ’80s yet to be inducted — every one of their eligible albums ranks in the decade’s top 100 on Acclaimed Music — and one whose lack of mainstream popularity in the States can only keep them out for so long, given the influence they’ve had on generations of rock mopes on both sides of the Atlantic. Morrissey’s general irascibility is always a variable here, though — it took Johnny Rotten five nominations to get in, and Moz is still only on his second.

Optimistic? Perhaps. Certainly the Susan Lucci of the Rock Hall — a record ten nominations, zero inductions — has to be considered snubbed until proven recognized. But with every year, the general outrage over the exclusion of the most important disco-era band grows, and you have to imagine that, despite what band leader Nile Rodgers says about their chances, one year it will boil over into begrudging acceptance. Whether it will be 2016 or not remains to be seen.

A resume similar to Deep Purple’s, with slightly superior reach and power of endurance — the band’s biggest hit, “Owner of a Lonely Heart,” came over a decade after their first, “I’ve Seen All Good People: Your Move,” and sounded completely different. Prog artists have had a minorly easier time getting in than metal ones — Rush and Genesis have both been inducted in the last five years, and on their first tries — though Yes doesn’t have nearly the star quality of either of those bands.

A band everyone likes but few are truly passionate about, it’s understandable that the Cars have had difficulty even getting to the bridesmaid stage of Rock Hall induction. Nonetheless, they certainly have the commercial success and enduring influence — Weezer owes a healthy percentage of their career to the guiding hand and musical influence of lead singer Ric Ocasek, and Fountains of Wayne frontman Adam Schlesinger has openly admitted that breakout hit “Stacy’s Mom” was an homage to the band. Induction will come soon, if not now.

One of the most beloved bands of the ’70s and early ’80s, with no shortage of classic singles or LPs (including one of the most famous live albums in rock history), and a legacy that’s only grown stronger as disciples like Billy Corgan and Dave Grohl have continued to proselytize on their behalf. It’s somewhat perplexing that it took this long for them to be recognized by the Rock Hall, though their amorphous place in genre history — the band belongs equally to metal, new wave, and power-pop lineages, though not truly to any one of them — may hurt them with some voters.

The world’s most dangerous group may still strike a tad too imposing a figure for some voters, but circumstances could not have lined up better for the four-time nominees to finally be inducted — certainly, no other nominee will have a box office-conquering, reputation-calcifying blockbuster film to their credit this year. It’s hard to name a Rock Hall-eligible group of any genre with more historical or contemporary relevance than N.W.A, and considering the fact that it’s already taken them longer to get in than Run-DMC, Public Enemy, or Grandmaster Flash and the Furious Five, the time is now for Compton’s finest.

One of the biggest, best, and most important pop stars in music history, it’s virtually unthinkable that Janet Jackson has been eligible for Rock Hall induction since 2007, but is only receiving her first nomination in 2015. (Blame unclear qualifications for what qualifies for “rock,” perhaps, but given that Madonna was let in the year her own eligibility period began, that excuse doesn’t really hold water.) Nonetheless, now recognized, it’s hard to imagine Janet won’t make it in on her first try — with her best album in a decade-plus getting her name back out there, and her praises routinely sung by any number of contemporary R&B artists continuing her legacy, she’s just too big to keep out of this thing.