Review: Shopping Waste No Time Getting Wound Up on ‘Why Choose’ 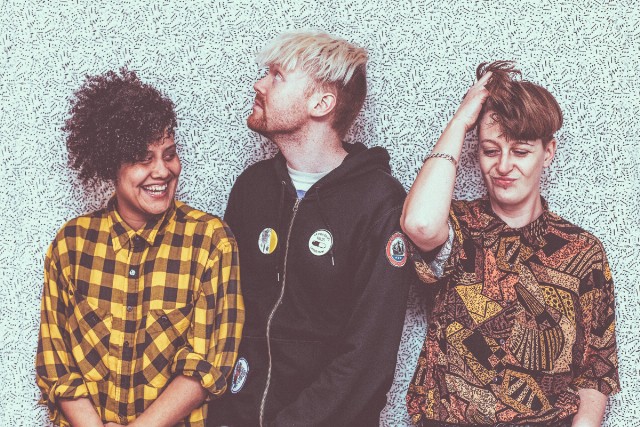 The beauty of the late-’70s and early-‘80s post-punk movement was how fluid and all-encompassing it was. At its basic level, the genre was a vibrant, multi-faceted response to punk, which was itself a multi-dimensional reaction to the political, social, and musical status quo. “Post-punk” became an umbrella term describing an astoundingly diverse group of bands — the roaring Doors-and-Velvets-inspired thunder of Echo & the Bunnymen; the death disco of Public Image Ltd.; and the bass-first minimalism of Delta 5 or the Slits.

Those last two artists are an especially prominent influence on the aesthetic of the East London trio Shopping. Formed in 2012 by U.K. DIY music scene veterans, the band sounds like a relic unearthed from a sealed-in-the-‘70s time capsule. The stark Why Choose — Shopping’s second album, but first LP that’s widely available after 2013’s Consumer Complaints — boasts speak-shout vocals, punk-funk bass lines, and clipped guitar riffs, all rendered with impressive precision and a retro-cool approach.

The hyperkinetic “Straight Lines” and “Knocking” feature rippling guitars, while the corrugated textures of “Wind Up” pair well with the song’s cyclical bass spins. Yet Why Choose isn’t monochromatic or post-punk-by-numbers: Eerie organ sneaks in at the end of “Take It Outside,” while the slower “Say It Once” boasts a rubber band-taut bass below complex rhythmic syncopation and whispering synths, and “I Have Decided” emphasizes frontwoman Rachel Aggs’ stair-step vocal exhortations.

Much of Why Choose’s greatness stems from the way Aggs interacts with her band’s music. The push-pull vocal interplay between her and drummer Andrew Milk conveys subtle bursts of power — note the subversion-from-within message of “Say It Once” and the paranoid dread of “Private Party.” Lyrically, her itchy irritation on opening track “Wind Up” is a delight: “I hear you talking / Unnecessarily / Wind up! / Wind me up.” Other songs are deceptively moving: the morose “Time Wasted,” a meditation on apathy and depression; the commercialism-criticizing “Why Wait”; and “Take It Outside,” which starts off confrontational and ends up almost conciliatory, finding common ground in frustration and antagonism.

At times, the very sonic repetition and minimalism that makes much of Why Choose so effective also hampers its output; the second half of the album especially feels monotonous and weighed down by its musical rigor. Yet Why Choose redeems itself with the brisk, mostly instrumental closing track “12345,” whose only lyrics are a countdown. It’s an unexpectedly lighthearted capper on an album often clouded with darkness — but completely aligned with post-punk’s propensity to flout expectations in the name of artistic progress.