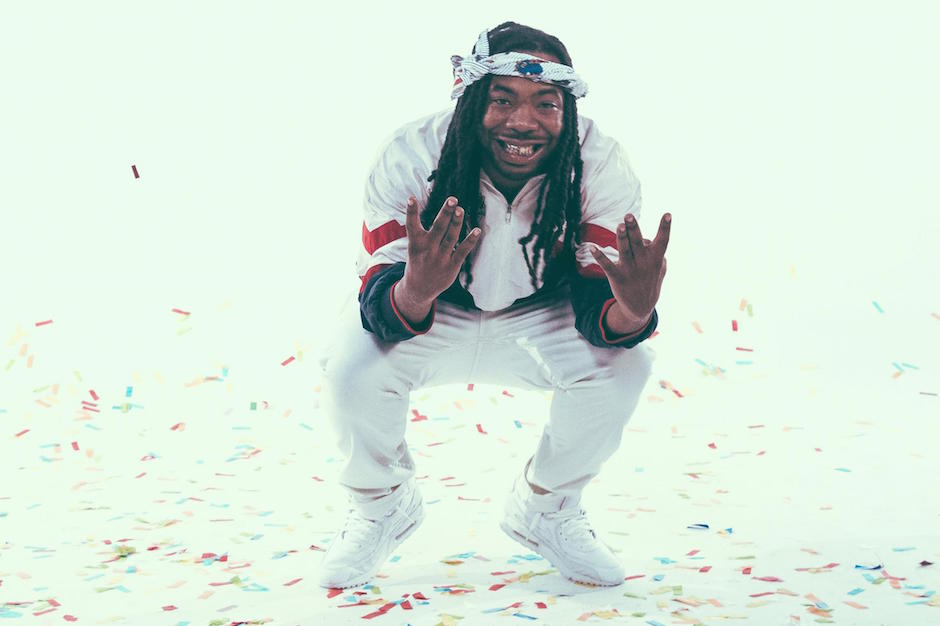 Forget that “Hotline Bling” ended up being the inescapable one, Virginia-born singer/rapper D.R.A.M. and his own breakthrough tune were still responsible for discovering the twee alchemy necessary to turn Pixy Stix and angel dust into sunny-eyed sung-rapped gold. Beyoncé was listening to “Cha Cha” — in all its Mario-sampling glory — long before Drake “jacked” (as D.R.A.M. recently put it) its pastel-hued brilliance anyway. So since he was able to parlay a surprisingly well-received debut tape into collaborations with hip-hop’s current sun king, Chance the Rapper, he’s says he’s “GOOD” — emphasis his.

Turns out there’s more reason to be confident than sheer buzz; he had this glitter bomb waiting in the holster. His Atlantic debut EP Gahdamn! may dial back the immediate ecstasy of his sound, but his sleepily grinning vocals can turn any corner of his aquatic sound into a delirious rave-up. Breeze through the record’s feathery intro and it kicks off proper with “Signals (Throw It Around),” that teeters from a slinking Motown intro into a stoned middle distance that’s become D.R.A.M.’s post-“Cha Cha” calling card.  Slurred vocals and fluttering harmonies dip, swirl and knot into one an another in an endearingly awkward mess not totally unlike someone who’s tied every pair of shoes they own together.

There’s a gleeful threat of faceplanting at many points here, but on “Signals,” as elsewhere, he’s able to surround himself with enough smoothly moving parts to transform the stiltedness into a gallop. A soul-house kick drum slowly fades into the mix, sending the whole track into a sort of beautifully awkward locomotion — like watching a newborn giraffe slowly gain its footing. D.R.A.M.’s interlocking vocals and the tracks’ pillowy atmospheres are a bundle of flailing limbs, but that kick drum provides a beautiful moment of celestial oneness. Tuned to just shy of melodic, and thwacking with a plodding rhythm like a Disclosure track soaked in codeine, it’s one of the most infectious (and affecting) single sounds to come out of hip-hop this year. It’s all too brief.

But he conjures versions of this magic throughout, hinting at disarray and then pulling through with one great sound, one melodic flick of the wrist, to transform the whole track into a work of jerky beauty. Even “Caretaker,” whose silken melodic threads are borrowed and rewoven from D.R.A.M.’s collab with Chance (an interlude of the same name on Surf), he builds from SZA’s slip-sliding vocals swirling synth samples and his own drowsy vocals into more tinsel tripwires. He slows the original down to a lugubrious crawl, giving the track a teetering, uneasy energy that the original’s saccharine devotional lacked. A side-by-side comparison highlights the uniqueness of his haphazard approach. There’s other rappers making hits out of stitched together vocal confetti (like, uh, Fetty), but his is the music of unlikely triumph, celebration in spite of your messy surroundings. Drake could only dream of a party so relatable.