Montclair, NJ’s Pinegrove has existed in various iterations over the better part of the last half decade, but at the center of a rotating cast and scurrying sonics the idiosyncratic songwriting voice of frontman Evan Stephens Hall has remained the same. Though his band can dive into labyrinthine math rock exercises or bare folk rock with equal aplomb, Hall stays steady at the center of it all, crooning interpersonal angsts and probing, as the band’s Twitter bio puts it, “the infinitesimal.”

Earlier this year, Pinegrove issued a retrospective cassette called Everything So Far on the up-and-coming northeast tape label Seagreen Records, documenting over 84 minutes pretty much the whole breadth of Hall’s obtuse efforts (he’s described it jokingly as “If Keith Haring made music” or “If Phil Elverum started a funk band.”) But today the band is announcing their signing to Boston indie rock label of the moment Run for Cover — who’ve also put out stunningly intimate records by Spencer Radcliffe, Citizen, Makthaverskan, and Elvis Depressedly in recent memory.

And to celebrate, Hall’s condensing his talents to one universal microcosm, a new single called “New Friends” which rides sunny-eyed electric guitars and a distant banjo sound tracking Hall’s post-collegiate insecurities. His knack is turning the big picture into bite-sized chunks — distilling the whole discomfiting experience of young adulthood into the uneasy feeling of walking into a room where all your friends should be and knowing no one. Oh well, Hall muses, guess you just have to make new ones. After all, he wonders in a burst of optimism, “What’s the worst that could happen?”

Run for Cover is set to re-release Everything So Far — with “New Friends,” included — on Friday October 9. At the pace Hall and Co. work at, they’ll certainly have something new soon, and if their latest reinvention is any indication, whatever’s coming will totally different, and it’ll still be something to look forward to. Pre-orders for Everything So Far are now available at the Run for Cover site. Listen to “New Friends” here. 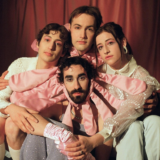