Miley Cyrus and the Flaming Lips Play ‘Karen Don’t Be Sad,’ ‘The Twinkle Song’ on ‘SNL’

She was introduced by Hillary Clinton 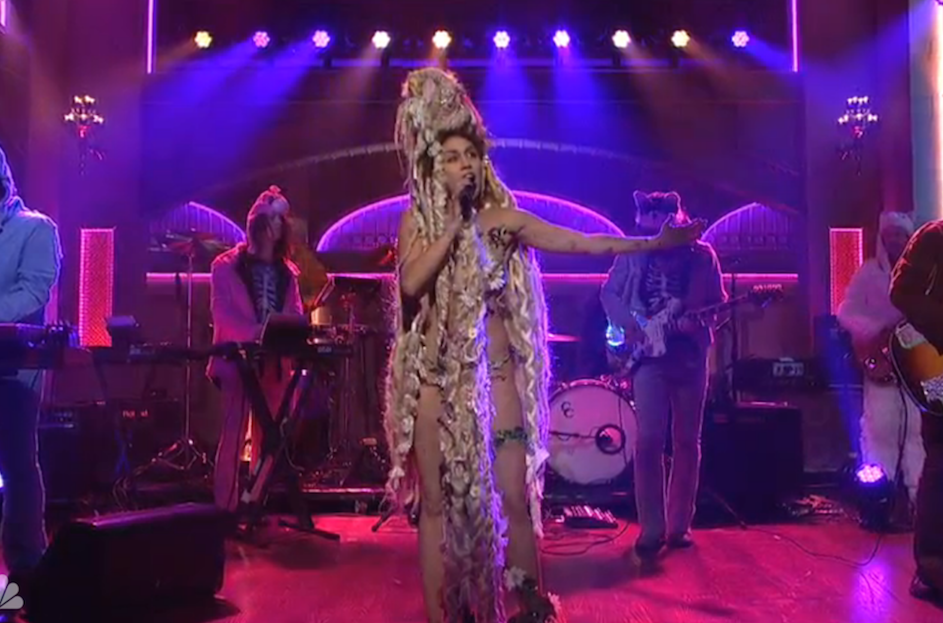 Miley Cyrus introduced the new season of Saturday Night Live last night with quietly arresting performances of “Karen Don’t Be Sad” and “The Twinkle Song,” both off of her recently surprise-released album, Miley Cyrus and Her Dead Petz. Her elaborate stage setup included a flower-laced Rapunzel dreadlock contraption, which she wore on her head during the former and appeared to turn into a piano covering for the latter. In all seriousness, Cyrus did get emotional during “The Twinkle Song,” attempting to smile through the tears and not missing a beat.

The show also kicked off her just-announced tour with the Flaming Lips, which she let slip to Jimmy Fallon a few days ago — along with calling him out for using fake cardboard instead of vinyl to display the Petz album cover. It’s not out digitally, at least not yet: Cyrus will sell vinyl on her tour. Find the handful of dates, her SNL performances, and her interviews on The Tonight Show Starring Jimmy Fallon below.

Update: Dan Deacon will be opening all the dates of the Miley Cyrus and Her Dead Petz tour. He says it “will be one of the most reality-curving events of my career thus far.” Read SPIN’s interview with the experimental pop mastermind from earlier this year for more.