The techno and house producer returns to his hip-hop roots with a heavy-hitting, collab-filled effort 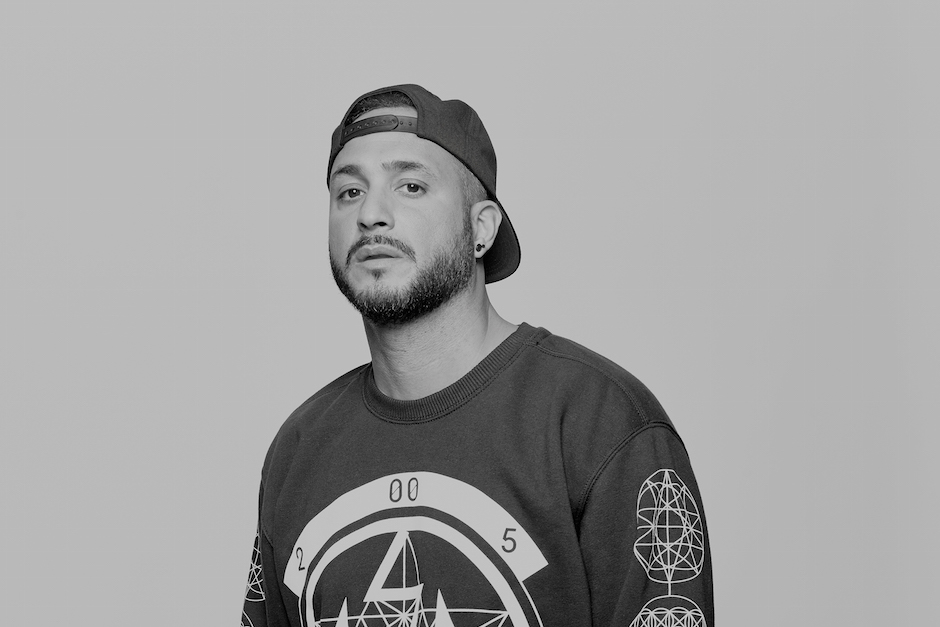 Loco Dice is just heading in from a surf session at Venice Beach. The DJ and producer born Yassine Ben Achour, known for fusing techno and house vertebrae into a hip-hop backbone, has three days off in Los Angeles before his first LP in seven years Underground Sound Suicide drops via Ultra Music, and he’s celebrating with some much deserved rest and relaxation.

Seven years and countless DJ sets after his minimal (and nearly ambient by comparison) debut full-length, 2008’s 7 Dunham Place — co-produced with Grammy-nominated fellow Deutschlander Martin Buttrich, with whom he also runs the label Desolat — Dice is returning to his less electronic roots. Born and raised in Germany, he grew up spending holidays in Tunisia with his mother’s family, where he was exposed to a multitude of sounds; reggae, in particular, has been a favorite of his since childhood.

Soon he became immersed in the Düsseldorf hip-hop scene, opening for American R&B and rap heavyweights like Usher, Ice Cube, and Snoop Dogg when they came through town; eventually, his burgeoning passion for stage-stomping rhythms eventually transpired into electronic music, leading Dice to headline major techno festivals worldwide. On Underground Sound Suicide, Dice revisits his beats-and-bass past with collaborations that include Just Blaze, Neneh Cherry, and fellow techno icon Chris Liebing, among others.

Before the album drops on Friday, October 30, and a Halloween show in New York City, we caught up with Dice to ask a few questions about his early music career and how it impacted his new LP, which is available for streaming here.

What are your very first memories of music growing up?
Carlos Santana, Julio Iglesias, and Bob Marley… This is the music I remember and still listen to. I knew from a young age that music would be a part of my life because it made me feel good. I was looking for tapes — I’d steal them from my uncle — and listen to them by myself. Back in the day [in Tunisia], you’d go to the local DJs and tell them what songs you’d want to hear, then you’d record them to a tape.

How did initially you become involved with the Düsseldorf hip-hop scene?
I grew up on the streets of Düsseldorf. I was hanging out in youth clubs with other immigrants who were living in my neighborhood. It was very clear from the beginning that break dance and hip-hop culture would affect us: It spoke to our hearts, and the identification was there. When I started going out clubbing, I went to soul clubs and we had a lot of British and American G.I.s in Germany. We learned from them about the music, the culture… We got their magazines and learned what to wear, how to dress. Later we went to south Germany, to Frankfurt, to go to bases where they were located, and we’d go to their parties.

Those early influences are still a big part of your sound, even in the world of electronic music. How do those roots compliment the techno and house sound you’re recognized for today?
When I listen to a techno track, I try to find the hip-hop in it somehow — the tracks that I play usually have those heavy subs. Underground Sound Suicide is a full result of everything [I’ve experienced], it’s like a circle that closed. I was scared in the beginning, when I moved to electronic music, to bring those influences in… even though I grew up with [the sounds of] Armand Van Helden. I was also fed up with hip-hop. I wanted something else, a 360-degree change. Nowadays, hip-hop has opened up a lot in the ways of production and the beats are much cooler, so it’s easier to bring those influences back into electronic music.

What led you to switch from hip-hop to electronic music in the first place?
Most of my friends stopped going out to hip-hop parties, and they started to go to electronic music parties. I didn’t get it at first, I was too much in love with hip-hop. But when I got booked to play in Germany, I’d always play the smaller room. In the bigger room, you’d have acts like Paul van Dyk, Sven Väth, and Richie Hawtin. I always left my place to go and see what was happening [in the other room], and I was fascinated by how a DJ could create with no vocals, just instrumentals. There was such an energy, a vibe, a mood. It had a huge impact on me. When I started to listen to tracks from Basic Channel and G-Man, real dub techno, I started to understand how amazing the journey could be as a producer and a DJ. Techno felt like a huge family. Electronic music was more free, more positive.

It’s been seven years since your last LP. What led to the creation of Underground Sound Suicide?
I had no ideas and nothing in my mind for a follow-up album [to 7 Dunham Place]. For me, an album is a concept — I can’t just do a collection of tracks that I play in the club. After seven years, everything clicked: I built a new studio, I put out the Toxic EP, and the sound was so great that all of a sudden, the ideas came. I had 16 to 17 ideas and I was like, “OK… I think it’s time to sit down and create this movie in my head.”

When I put all of these people together in my studio — [Just Blaze, Pulshar, JAW, Neneh Cherry, Giggs, Chris Liebing, Miss Kittin] — I wasn’t even thinking about an album, but everything was organic and natural. We [Just Blaze and I] looked at each other and we were like, “You know what? We dig our stuff so much, let’s hang out and do something for an album.” And that was the drop.

Your album drops Friday, October 30 and you’ve got a club tour to follow. What are your plans once that tour wraps up?
A DJ never finishes touring.