Q&A: Chaka Khan on Earning Her First Solo Nomination to the Rock and Roll Hall of Fame

Home » Features » Interviews » Q&A: Chaka Khan on Earning Her First Solo Nomination to the Rock and Roll Hall of Fame

The 2016 nominees for the Rock and Roll Hall of Fame were announced yesterday — a diverse group of greats that includes trailblazing rap group N.W.A., the industrial rock of Nine Inch Nails, and the repeatedly, criminally snubbed funk group Chic. Also receiving her first solo nomination this year is the legendary singer Chaka Khan, who rose to popularity as part of the previously nominated group Rufus before breaking out on her own with hits like 1984’s Prince-penned, number-three smash “I Feel for You.”

Khan’s iconic voice and adaptability effortlessly brought funk, rock, disco, and R&B together throughout the 1970s and ’80s, on classics like 1978’s immortal “I’m Every Woman,” but she’s still going strong, having scored a Best R&B Album Grammy in 2008 for her album Funk This. SPIN caught up with Khan briefly on the phone to talk to her about this latest accolade, and some of her fellow nominees.

Congratulations on your nomination.
Thanks a lot! 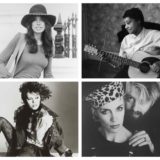 Where were you when you found out you’d been nominated?
When I woke up this morning, I had a lot of messages. Phone’s been ringing off the hook all day.

How did it feel to get your first nomination?
You know I was up for the nomination with Rufus, but that didn’t happen. I’m looking at it like the second time up for me. I’m honored to be in the running along with this competition. It’s amazing.

How do you feel about your chances?
I’m always — you know, I’m a glass half full kinda girl. [Laughs.] I feel good about it. I think that, things don’t knock on your door more than once, usually, for a reason. I’m just thankful, really thankful right now, just to be relevant and in the running. Just to be still able to make my living doing what I love to do.

Knock on wood, assuming everything goes well, who would you like to induct you if you do get the nod, or is it too early to say anything like that?
It’s too early. I just found out today! Give me a minute. [Laughs.]

Which other nominees would you like to see get in? Especially with Chic getting nominated for the tenth time?
Who?

Chic?
Wait — Chic has been nominated for the tenth time?

It’s their tenth time getting nominated and they haven’t gotten in so far. Maybe this could be their year.
That’d be great. I would love to see Chic get this. I think they definitely have it coming. Nile Rogers is a great friend of time — and he’s no joke.

Also, Chicago. I’d love to see them. I think that everybody on the list — pretty much everybody is deserving. I think they did a really good job with them.

Do you think that this batch of nominees is a little more funk- and disco-oriented?
It’s a really rich combination of people and genres. I was struck by that.

Do you think that the Rock Hall has overlooked this era a little bit in the past?
Eh, what do you think? Yeah, kinda. I think they’re taking a broader look and a broader mind expansion to see a truer reality.

Do you think anybody was snubbed?
I don’t really know who has it or who doesn’t. I’m not really… I’m honored when I get awards, but I don’t do due diligence in seeing who else has what. I don’t know if Tina Turner has it or not, do you? She’d be a person of interest. Also Prince.

Umm, I’m almost positive she was, but lemme double check — yep. She was inducted along with Ike Turner. Prince is in the Hall too.
Oh, okay. I’m good then. How about Stevie Wonder? I’m sure he’s probably won it?

He was inducted in 1989.
There! The only other [artist] I could think of is Chic.

Do you have any advice, as an icon, for stars today about how to keep a career so vibrant and culturally relevant over the years?
I shouldn’t say this — don’t sell yourself cheap. Don’t do anything that is too far out of your comfort zone. Don’t do anything that you’re not in love with. Because the main thing is the love for what you do. That’s your life’s blood. That’s the only reason for being. That’s what you are. That’s my best advice right now.