Review: Ought Lean Into the Futility of Existence on ‘Sun Coming Down’

Home » New Music » Reviews » Album of the Week » Review: Ought Lean Into the Futility of Existence on ‘Sun Coming Down’

“It’s a very astute observation, if I do say so myself.” Even before he pats himself on the back on “On the Line (Ava Maria),” Tom Beeler Darcy — the wry singer and guitarist driving sputtering post-punk Canadians Ought — has already freewheeled through a seemingly random litany of images: Rome (and a pun involving homophone “roam”), Chicago, ipso facto, Iggy and the Stooges (“I am your dog”), “golden suns,” and greener pastures. The verbal acrobat saves his more acerbic observations for the seven-minute centerpiece of the band’s reasonably optimistic, fiercely intelligent sophomore album, Sun Coming Down.

On “Beautiful Blue Sky,” Darcy spits out everyday aphorisms like chump change from a slot machine: “Fancy seeing you here / How’s the church? / How’s the job? / How’s the family? / Beautiful weather today” before collapsing in a sweaty, breathy “Yes” as drummer Tim Keen, bassist Ben Stidworthy, and keyboardist Matt May lazily keep pace behind him. Though such throwaway phrases could have come straight from the playbook of one of Ought’s most profound literary influences on their communal bookshelf, David Foster Wallace — one of the best-versed in elucidating the mundanity of everyday living — they’re actually closer to another cultural critical theorist.

In his essay “Rock, Territorialization, and Power” (we’ll get there, don’t worry), University of North Carolina’s deservedly decorated professor of communications Lawrence Grossberg argues about Marxist philosopher Henri Lefebvre: “When he asks whether music ‘express[es] the secret nature of everyday life, or compensates, on the contrary, for its triviality and superficiality,’ our answer must be that it does both. In fact, it is precisely in attempting to transcend particular forms of recurrence (everyday life) that music is able to express its secret nature.” By that metric — even though there is, so far, zero acknowledged connections between Ought and Lefebvre or his explainers — Sun Coming Down does exactly what music is supposed to do. 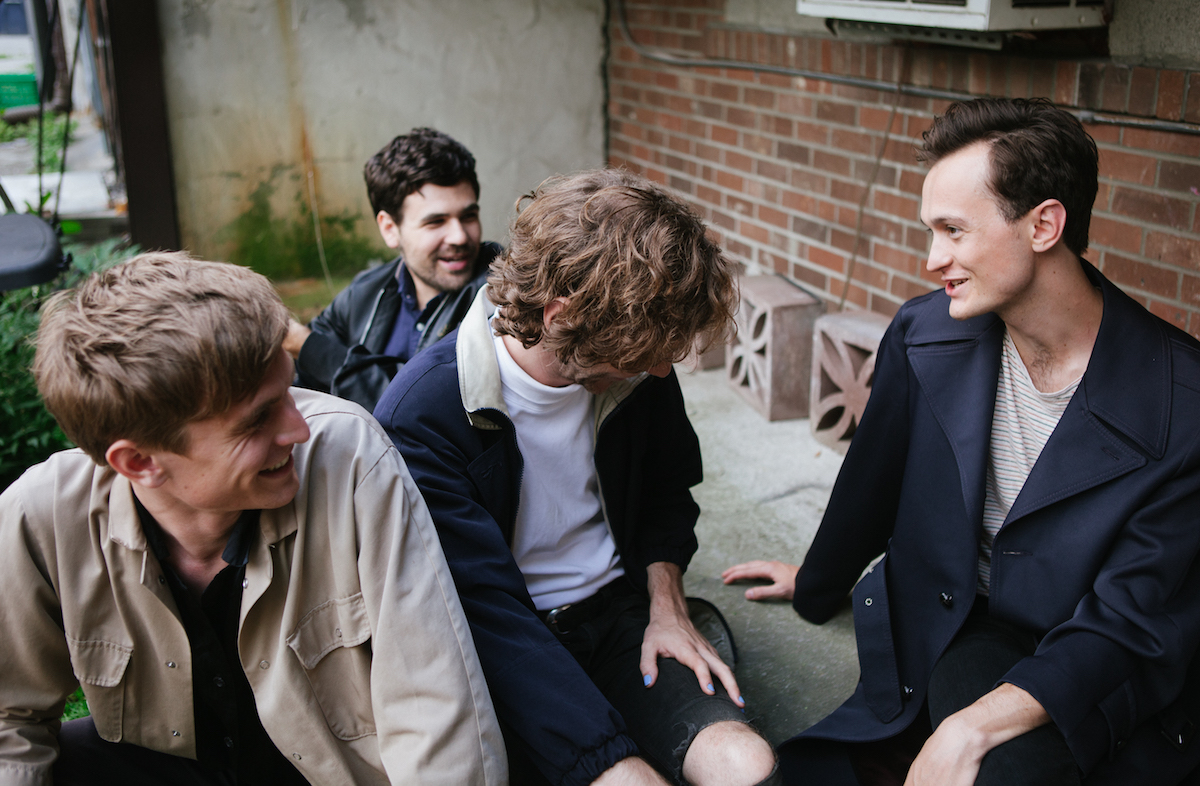 That self-awareness balancing between celebrating and eviscerating the mundane is a quality shared by lyricists in the past few years’ worth of tightly wound post-punk millennials, like Protomartyr and Parquet Courts (see: the latter, in the same breath, writing about stoned forays to Queens bodegas and then lambasting the #olds for dispensing unsolicited advice). “Are you gonna be ready / When you see who we are? / And when you look it in the eye, and you go and decide / Mine punk, mine punk,” Darcy asks almost rhetorically — or rather, declares — on caustic opener “Men for Miles.” In lyrics written like beat poetry — breaking lines within and between words with too much or not enough punctuation — he spits, in a voice so taut and trembling you can almost see the university-fed tendons leap out of his neck, claiming this type of art in just two words: “Mine, punk!”

Though he takes an awkwardly long line to come to that conclusion, Sun Coming Down is Robin Hood-rich with pithy one-liners punctuated by Keen’s hi-hats, crashing through Darcy’s free-associating swarm of noise like that one person in every New York-based rom-com or sitcom wending his way through an avenue packed with people. “I am mobile, I am modern” on “Passionate Turn” is probably his mic-drop moment on Sun Coming Down, a bumper-sticker statement of those who remember the ‘90s, but not so much the ‘80s, that’s at once ironic and so true it almost feels too easy. It’s stiffened by briefly angular atonality in a song that’s surprisingly raw and emotional — or at least more overtly than the album’s other explorations of ennui. His sung-shouted plea “There’s too much all for you / It’s too much all alone” scans almost as a reaction to the aforementioned line: just because we all have phones doesn’t mean we should bask in their cold glow.

But just when it seems like Darcy has, as Lefebvre says, tried to transcend life’s more banal qualities by arriving at those “secret truths” onstage and on the record, he returns to the safety of sarcasm and thorny, squalling feedback. “Sorry, sorry,” he sneers, “for bringing you down.” In other words, it seems: Sorry, not sorry. And then, he confesses on the basement-stage supernova of an almost-title track: “I am talking out of my ass.”

Album of the Week, Ought