Review: FIDLAR Kick Their Bad Habits on ‘TOO’

Has success ever truly been an accident? It might be in the case of FIDLAR, a Los Angeles garage-punk band that slapped together a no-effs-given debut album in 2013 that was concerned with not much more than parties, drugs, being broke, and being drunk, and ended up winning the foursome a crop of self-glorifying, self-loathing admirers. Now, FIDLAR have returned with their sophomore LP, with its on-the-nose title TOO. This time, the West Coast kids aren’t feeling so good about being smashed anymore.

With its throaty barks and feedback-shot riffs, the recently released follow-up initially comes off as the afterparty. But 28-year-old frontman Zac Carper is a changed man now, as he recently revealed to Stereogum: “Through the whole first FIDLAR album cycle and the tour, I was basically this crazy person on drugs,” he said. “On this new record, I’m just a crazy person. I stopped doing heroin, I stopped doing meth, I stopped smoking crack, so now all I’m left is with is just being this crazy person who’s trying to deal with it… and the way that I dealt with it was writing songs.” And to that end, TOO‘s lyrics are as transparent as Carper’s Q&A candor, as the singer-guitarist lets the light in on his disarrayed life.

It’s taken a lot for Carper to get here. He’s been in and out of rehab; in 2013, he tragically lost a girlfriend and unborn child to an overdose; and FIDLAR itself has almost combusted due to its leader’s self-destructive proclivities. But Carper is reaching for catharsis via open-eyed observations (“And every morning I wake up / I just wanna give up / But I guess I gotta deal with it”) and varied songwriting that departs from the band’s consistent-at-best, samey-at-worst debut.

This new batch thrashes with abandon (“Punks”) and displays a remarkable leap in instrumental maturity with its airtight chord progressions and unhinged shrieks; elsewhere, “Why Generation” settles in the slow lane as it unfurls aimlessly with winding six-string solos that could be more the soundtrack to an early-morning coffee than anything resembling a sweaty basement soiree. 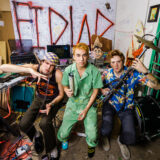 FIDLAR Tease New EP With ‘FSU’ Ahead of Fall Tour

That being said, forward movement is a constant process, and FIDLAR are prone to regression here. Brat-punk tracks like “West Coast” and “Drone” rely a little too heavily on two-note pop-punk 101 bass lines and juvenile subject matter (“Skipped school / I’m already failing / Tell mom and dad that I’m bailing,” “IIIII wanna be a drone”), edging the whole project into a so-close-yet-so-far liminal state. On the bluntly titled “Sober,” the man who named his band after an acronym for “FUCK IT DOG, LIFE’S A RISK” learns that the drawbacks don’t end when the risks do: “I figured out as I got older / That life just sucks when you get sober.”