At the heart of experimental music is an aim toward the aspirational. High-minded tinkerers evoke future utopias for the world of organized sound, offering statements of what is and and imagining what could be. It’s a place where boundaries between the dance floor, the bedroom, and the lecture hall are dissolved into a psychedelic goop of body-shaking, brain-stimulating resonance. Or, you know, sometimes it’s just really loud.

This quarter’s installment of the Noise Report (now including all manner of high-minded electronic tinkerers) includes a fair bit of future-gazing: trans-feminist devotionals, Cimmerian club tracks, polyrhythmic drum duos. But there’s also a brief survey of what already works: blasts of totemic, piercing static. In short, some use the chalkboard to write futurist manifestos, some just take their nails to it. It’s all just noise anyway. — COLIN JOYCE 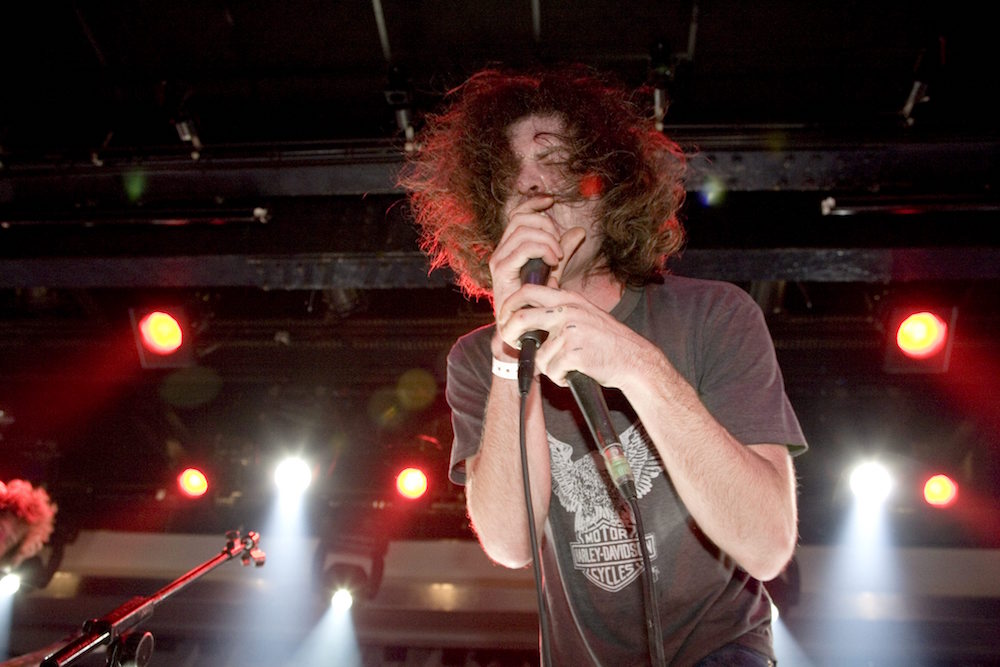 Power Monster, White Single Female (Signora Ward Records)
Escaping the roar of your own consciousness is the ultimate life hack — that’s what day jobs, barhopping, social media, and pop music are for. A gurgling, AM-dial inquisition, White Single Female suggests full-on surrender to the internal, infernal self, an unflinching gaze into a mirror of excruciating, HD clarity. On this tape, Providence’s Alexandra Pharmakidis herds sonic imperfections into an epic apex: random introductions of sharp, distorted shivs, feedback flames licking back and forth between doomed channels, disorienting bursts of static-spackled everything-and-nothing at once. Female is VU-meter Kryptonite — the ugliest, most complicated game of hopscotch you’ll ever willingly play until you wear it out. — RAYMOND CUMMINGS

Elysia Crampton, American Drift (Blueberry)
Elysia Crampton first came to prominence as e + e, a producer who warped and redefined pop music into forms extraterrestrial and endearing. Now she’s doing the same thing to club music, drawing on South American psych and metal to craft a utopian vision of electronic production that has no business anywhere near a club.

It’s just as well that she’s getting speaking and performance engagements at Ivy League Schools; the spaced-out judders, crunk samples, and trans-feminist spoken-word segments require as much careful contemplation as any philosophy text the kids at Yale will be pouring over this semester. Put away your dancing shoes and grab your thinking caps. — C.J.

Prurient, Frozen Niagara Falls (Profound Lore)
As any fan of Lil B or Robert Pollard can tell you, no direct correlation exists between musical prolificacy and genius. Between Prurient, Vatican Shadow, Rainforest Spiritual Enslavement, and other projects, Dominick Fernow’s reign of terror has, over the past few years, escalated to a point that even the most hardcore noiseniks’ wallets are crying uncle. On a scuzz budget? Lunge only for the tent poles, like Frozen Niagara Falls. It’s less a definite “statement” release on the order of Through the Window, Pleasure Ground, or Black Vase than a double-disc survey of Fernow’s innumerable poltergeist visions. Blare Falls in the prescribed order, on shuffle, in a plane, on a train: You’ll dance, you’ll cringe, your Mom will freak out, your homies may start rumors about you — which is as it should be. — R.C.

M.E.S.H., Piteous Gate (PAN)
Like the fractalized fabric that Berlin-based producer James Whipple appropriates for a production moniker, Piteous Gate is a porous, sensual record, revealing and alluring in ways that other albums aren’t. Amorphous keyboard lines and stuttering static give a brief layer of modesty to his voluminous breaks and shuddering drops of these left-field compositions. Neither he nor his peers on PAN are floor-fillers, but Piteous Gate‘s pheromone-misted songs are suggestions that he could be if he wanted to. He’d rather save a little something as a sinister mystery. — C.J.

Maja S.K. Ratkje/Jon Wesseltoft/Camille Norment/Per Gisle Galåen, Celadon (Important Records)
Celadon is chameleonic, sinuous and sinewy, teeming with drones that glisten like fresh spiderwebs at daybreak. Cut in the mausoleum of the late Norwegian sculptor and painter Emanuel Vigeland, it’s that most unusual of quartet LPs: the players sacrificing their respective individuality in service of a whole that feels telepathic. Reverberating rivulets of harmonium, bells, organ, and other instruments stream together to form a holistic stew that is by turns glassine (“Beneath the Bough”), broiling (“The Green Flood”), and regally outre (“Afterglow”). The ideal hostess for this avant-garde soiree, Maja S.K. Ratkje comports her voice to accentuate Celadon’s shifting intensities, her sharp ululations mimicking the massed sine waves or operatically surfing them. — R.C.

Motion Sickness of Time Travel, Weeks (self-released)
Rachel Evans’ first effort of 2015 (a shock given that she averaged more than one a month in 2014), Weeks was apparently first conceived as an exercise in self-hypnosis. Slowly loping vocal drones are teased out into Ambien mantras; keyboard lines sit and meditate. As the name suggests, Motion Sickness of Time Travel has always been about slowing down and taking stock of the chaos around you, Dramamine for the stomach-churning modern world. — C.J.

Container, LP (Spectrum Spools)
The prickly recordings that Ren Schofield makes as Container isn’t exactly dance music, but he’s been creeping his way toward the discotheque for a while now. The clouds of static and distortion finally parted for his June album LP (not to be confused with his 2012 release, LP), which builds a steamrolling production and piston-like percussion out of broken electronics and heaps of scrap metal. It’s as if he’s found a club that’s right next to a junkyard. Wake up and smell the garbage. — C.J.

Uniform, Perfect World (12XU/Alter)
Uniform’s rage is anything but — an inchoate stutter-shove equal parts post-punk and first-album Suicide with a pinch of debilitating noise tossed in for good measure. No surprise, really, given the personnel involved: ex-Pygmy Shrews member Michael Berdan pitting snarling howls against strained, stippled grit courtesy of ex-Men bassist Ben Greenberg. But the duo leaven Perfect World’s miserablism with just enough smeared hooks and doom-metal licks to make converts of the underground faithful and the casual headbanger; as tortured triumphs go, this debut is a doozy. — R.C.

Fox Millions Duo, Lost Time (Thrill Jockey)
Take New York’s two best drummers and put them in a room, see what comes out. That’s been the formula for Greg Fox and Kid Millions duo performances to date, but their debut LP for Thrill Jockey feels more tightly composed. It’s still bursting with the ecstatic energy that’s come to define their work with Liturgy and Guardian Alien (Fox), as well as Spiritualized and Oneida (Millions), and there are brittle electronics and droning keyboards to round out the spontaneous thrust. Yeah, there’ll be no need to make up for Lost Time. — C.J.

Methlab Explosion, Parasomnia (self-released)
The bass at the center of Parasomnia is a dense, merciless burr of a sound. That thick, oily low end thrums and stipples through “Perpetual Isolation,” zig-zags in a foreboding loop on “Paracusia,” and colors in “Exploding Head Syndrome,” a fearsome Chunnel-digging monster your dentist would love. While fans of Lima, Ohio-based Methlab Explosion can’t complain about a dearth of material (the duo’s Bandcamp page is lousy with splits and EPs), Parasomnia stands as the most concise, penetrating distillation of their aesthetic. As far bowel-loosening, headphones-enhancing adventures go, this is simply the best noise-saturation game in town — until the band’s next LP, anyway. — R.C.