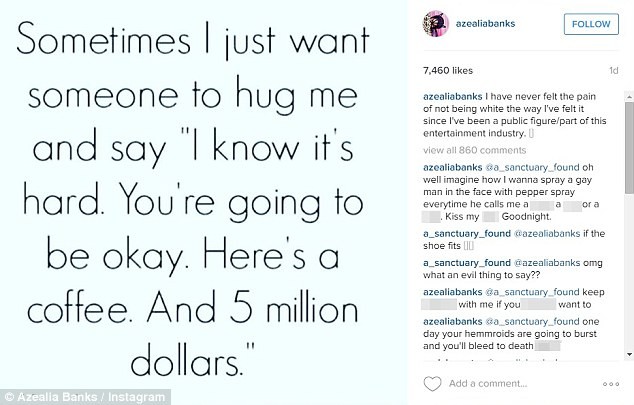 Azealia Banks doesn’t know when to stop: After an incident last week in which she called a flight attendant a “faggot” and claimed a man on the airplane hit her as she tried to disembark, the controversy-embroiled rapper unleashed a torrent of obscenities against an Instagram commenter.

Here’s the situation as Vulture explains it. On Saturday night, Banks uploaded the following quote to Instagram:

Sometimes I just want someone to hug me and say ‘I know it’s hard. You’re going to be okay. Here’s a coffee. And 5 million dollars.

Which was also accompanied by the caption “I have never felt the pain of not being white the way I’ve felt it since I’ve been a public figure/part of this entertainment industry.”

A fan then replied in the comments section of the photo, “Imagine the pain young gay fans feel when they hear the vile things you say,” which, all things considered, is a totally legitimate comeback. But of course, Banks wasn’t having any of it. The Daily Mail screen-grabbed the 24-year-old’s replies:

oh well imagine how I wanna spray a gay man in the face with pepper spray everytime he calls me a b*tch a slut or a hoe. Kiss my ass. Goodnight.

Keep f*cking with me if you f*cking want to.

Oh, and then there’s this:

One day your hemmroids are going to burst and you’ll bleed to death b*tch.

Yea keep trolling for d*ck on grindr. You’ll be murdered and stuffed under a truck somewhere soon.

Many have made the argument in the past week that Banks’ use of the gay slur “faggot” was perhaps less bad than when straight performers use the word (she’s outspokenly bisexual), but to tell a commenter that they’ll be murdered for pursuing someone of the same sex on an iPhone app is inexcusable. Perpetuating violence against any community, whether you belong to it or not, is not fair game.