Welcome to SPIN‘s Singles Mix! SPIN staffers have rounded up their favorite, must-hear tracks for your personal playlists. Collecting the finest from resurfaced Marc Bolan progenies, Philly-dwelling soft-pop singers, (Late) Song of Summer contenders, and more, these are the songs you need to know right now.

Alex G, “Bug” (Domino)
The words “bug in the crosshairs” don’t exactly inspire a pleasant image, but the way that lo-fi luminary Alex G sing-mumbles and manipulates his vocals to sound like an ant on helium makes you want to lean in and find out if that sorry insect will make it out of his situation alive. — RACHEL BRODSKY 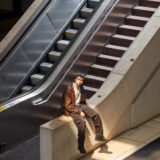 Alex G Is Back With a New Album, Single, Fall Tour

Dillon Francis and Calvin Harris, “What’s Your Name?” (Mad Decent)
Two of the biggest main-stage monsters team up for the most face-melting of bangers — that should have come way, way earlier in the summer. “What’s your name?” Indeed, you won’t know or remember anything else: The squealing sirens and deep, punishing moombahton low-end Francis has always championed will scramble body and brain into something that can only bounce up and down. — HARLEY BROWN

Deerhunter, “Snakeskin” (4AD)
About as unexpected a Big Rock Single as we’re likely to hear in 2015, “Snakeskin” doesn’t actually sound anything like INXS, but it does sound like a halfway point of the two eras that straddled them — half ’70s Bolan boogie, half ’90s stoner alt-shuffle. Most impressively, it still sounds quintessentially Deerhunter; frontman Bradford Cox  proclaiming “I was born with a snake-like walk” and “Time was erased, yes, but I was so homely” over rattling percussion, before the groove flattens into desert-like sprawl, and the whole thing dissolves into the moonless night.—ANDREW UNTERBERGER

DJDS, “You Don’t Have to Be Alone” (Body High)
Formerly known as DJ Dodger Stadium, the Los Angeles area’s foremost underground hothouse duo of Samo Sound Boy and Jerome LOL are back with another dazzler of four-on-the-floor beats and emotional gospel. “You Don’t Have to Be Alone” takes the opposite tack from their debut’s Lonely Boy anthems like “The Bottom Is as Low as You Can Go,” building with piano stabs and kaleidoscopically layered vocals build to a heart-clutching climax.  — H.B.

Fifth Harmony, “I’m in Love With a Monster” (Epic)
This Harmony Samuels funk jam relies on deftly placed samples and a retro tone (the harmonizing, the post-chorus drumroll, and sharply muted saxophones), making it seem like much more than a soundtrack single — for Hotel Transylvania 2, of all things. Lyrics skew far less childish than expected, considering it’s for an animated movie: “Buy me a thorn before he buys me a rose.” If it’s any indication of what the quintet’s sophomore album might sound like, we’re signing on the dotted line. — BRENNAN CARLEY

Helen, “Violet” (Kranky)
Grouper auteur Liz Harris she’s spent nearly a decade coloring between the lines of opaque experimentalism and stormy ambient composition, but her favorite shades have always been dark and regal.  She called a 2012 collection of dim drones Violet Replacement, but now her pop band Helen has returned with the real thing. Like the handful of singles she’s released with that act, this one’s built around a charmingly slipshod mix of guitar, bass, drums and airy vocals, but this one cloaks itself in shadows, a track rich enough to deserve its title. — COLIN JOYCE

PALM, “Crank” (Exploding in Sound/Inflated Records)
New York State’s PALM finally have a studio recording to match their high-wire live act. “Crank,” from their forthcoming Trading Basics, is a a teetering combo of strung-out guitar-lines and asymmetric drum clatter that always feels right at the edge of a stumble into the swirling void. So, uh, look out below. — C.J.

Saintseneca, “Sleeper Hold” (ANTI-)
Columbus folk-punk quintet Saintseneca get strum-happy on the moving first single from their upcoming record, Such Things (out on October 9 via ANTI-). The end result, comprising plucky boy-girl harmonies, plinking piano, and a brain-sticking chorus, is frankly a lot more uplifting than the song’s titular choke-out technique, which can render its victim unconscious in seconds. — R.B.

Valley Maker, “Only Friend” (Brick Lane Records)
The first track from Southern ex-pat Austin Crane’s Seattle-based folk project is as lonely as the title would suggest. Though his subtle, twanging strings and serene background noises convey a sense of a haunting warmness, there are somber themes of loss, too (“We grew up in a southern town / What was up was really down”). The emotional heart of this quietly beautiful song conveys a rustic happiness — even if it might be a little lost. — JAMES GREBEY