At this point, the number of songs surrounding Panda Bear‘s most recent album, this year’s Panda Bear Meets the Grim Reaper, is more than the album’s actual track list. Before the Animal Collective co-founder’s hypnotically crunchy fifth LP came out in January, the Mr Noah EP arrived in October (featuring a feral title track would eventually appear on Reaper); and the EP PBVSGR Remixes landed just as startlingly — and was just as much of a pleasant surprise — the following summer. Now, from the remix sessions comes the Crosswords EP, a motley collection of songs old (“The Preakness” can originally be found in the box set for Panda Bear’s 2011 LP, Tomboy), borrowed (“Crosswords” first appeared in a different mix on Reaper, while “Cosplay” appeared in very different form last year), and new (the other two, “Jabberwocky” and “No Mans Land” have never been heard before).

Just like the experimental ecstasies on those other short-form releases, Crosswords kneads in Noah Lennox’s ear-scratching samples, burbles, whistles, and grunts. Unlike those, however, these songs are relatively low-stakes: Unlike Mr Noah, this new EP is not announcing an upcoming album, and it’s not adding anything monumental to the one that came before. And if there was any doubt about that, the final track, “Cosplay,” is about chilling out; specifically, smoking weed. “Marijuana makes my day,” Lennox sings over and over again, sounding almost beatific as his slow enunciations climb the music scale higher and higher to match his state of being. Crosswords doesn’t have to top critics’ polls, but it does seem to be a sort of victory stroll for the 37-year-old father and husband — another chance for listeners to revisit and re-appreciate Grim Reaper (and perhaps by association, its aesthetic and technical predecessor, 2007’s Person Pitch) without Lennox doing too much work.

Though Crosswords‘ lackadaisical pleasantness is by no means offensive, there’s no compelling reason for this EP to exist. By contrast, Mr. Noah stood alone as an exceedingly lovely and thus essential piece of Panda Bear’s catalog: the sing-song death references strewn like tears across “Faces in the Crowd,” chanted rounds and Eastern-informed harp playing throughout “Untying the Knot,” and chopped-and-screwed nods to Brian Wilson on “This Side of Paradise.” As for Crosswords: Sure, it’s fun hearing the more productive stoner version of “Cosplay,” but the other songs — such as “The Preakness,” bouncing on The Yellow Submarine‘s carnivalesque keys and Lennox’s extended, emotive tones — hold limited appeal for anyone but the fans who’ve already heard them. As for the truly new ones, “Jabberwocky” limply falls between his solo output and Merriweather Post Pavilion’s most accessible tracks; “No Mans Land,” at least, is a hopped-up mishmash of hoots and yelps, chugging rhythms, and the distant sounds of a wooden block. Perhaps that song will find its way onto yet another EP, one with hopefully a bit more purpose. 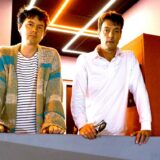