On the first night of Outside Lands, standing in the VIP area with a group of colleagues, there was a quiet divide being created. “Well, I’m going to D’angelo,” one said, while another was slowly inching closer to the VIP exit, trying to pull the rest of the group with here. Whether it was conscious or not, she was being pulled slowly toward the field where Mumford and Sons had just begin their headlining set on the nearby stage. “I want to see Mumford,” she finally said, spinning around on her heels and power walking into the melee.

The first day of the festival was a smooth-sailing mixture of newcomers and seasoned festival pros, with the female performers, so often under-represented on festival lineups, shining the brightest. Natalie Prass, whose nuanced, lovely self-titled debut was released to critical acclaim earlier this year, started the day off sweetly, performing her exquisite romantic ballads with deft technical skill. She’s a singer’s singer, with a nimble range and creative vocal arrangements.

St. Vincent, who is no stranger to a festival stage, brought ferocity and vigor to her set, one of the strongest of the day, and perhaps the festival as a whole. But there was a through line running through most of the conversations of the day, even as these great performances were taking place — which headliner was everyone going to choose to see?

Scheduling conflicts are one of the most common conundrums to navigate in the current festival culture, as lineups are stacked to appeal to music fans across all genres. There’s something for everyone, but for listeners who are interested in a wide range of sounds, this often means hard decisions need to be made. Typically, late-night sets are reserved for EDM artists, but rap, R&B, and rock headliners are often forced to occupy the same time slots. At Outside Lands, the pairing of Mumford and Sons and D’Angelo is by far the most divisive of the weekend, but in the end, the contrast between the two sets made it clear that the two groups fan bases couldn’t be more different. 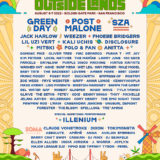 D’Angelo took the stage first, on the small, wooded Sutro Stage, off to the side from the festival’s main thoroughfare. Accompanied by the Vanguard, his 10-piece backing band, his set was an explosive one, and standing in the field below him surrounded by his adoring, dancing fans, I felt transported. He’s a charismatic and powerful band-leader, and as all powerful band leaders are, seemed almost telepathically connected to the musicians around him. It was an infectious feeling, and the audience grooved and swayed right along with his conducting hands and stomping feet, breaking down the usual boundaries of those on stage and those observing. When he played his final song, earlier than most people probably would have liked judging from the still-joy-filled grumbling from those around me, the crowd wanted to stay in that groovy, interconnected place for as much longer as they possibly could.

Mumford and Sons, on the other hand, ripped through their newly electric guitar-heavy set of hits, coming out hot with “Snake Eyes” and “I Will Wait.” Mumford has always been a band made for a festival stage; even their ballads are enormous, and the songs seem to fill the space of fields and parks as if written specifically for them. This new, rock-ified Mumford — the even-more-arena friendly sound they introduced on their latest LP, Wilder Mind — fills even more space, but bigger doesn’t always feel better. While D’Angelo’s managed to turn the festival stage and the field below it into an intimate place, Mumford’s enormous bombast made the space feel even bigger than it was. The thing is, though, that’s what festivals like this one are for — there’s something for everyone, and on day one, Outside Lands certainly delivered.