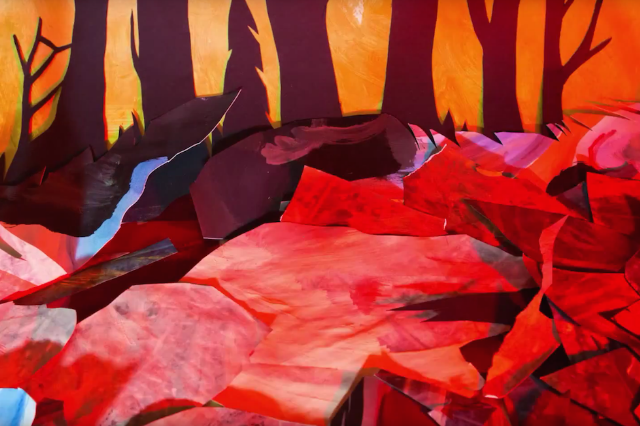 Mind Over Mirrors has long been the moniker of Chicago-based ambient composer Jaime Fennelly, but of late the project’s grown a bit. For The Voice Calling, which originally came out back in January as a limited cassette, he’s enlisted Haley Fohr of Circuit des Yeux to lend her seasick vocalizations to his harmonium-driven drones and densely layered instrumentals.

That album will get a vinyl release on September 18 and today he’s sharing a video for “Strange(r) Work,” a florid example of the slow-motion mantras he’s gotten so adept at issuing over the years. The Timothy Breen-directed clip’s appropriately abstract, a stop-motion visual of paints and paper cuts, that mirrors the piecemeal constructions of the composition. Watch the video here alongside a brief email Q&A with Fennelly about the new direction of the project, which has been edited and condensed for clarity.

You’ve described your music as “devotional,” what exactly did you mean by that?

I’ve described my music as being devotional for myself, and if it has that same type of potential impact on listeners then I would say I’m having some successes. I do find that particularly in live performance, my music moving around a room demands a certain kind of attention and I’ve found a particular urgency within that, almost like a calling. The drone being a major compositional building block in my work also certainly acts as a focusing point, but I also aim to activate the drone through time & space – rather than exist in solely static form. Metaphorically, I think about this like practicing meditation while being projected very quickly through space and there are all of these events that you are passing by and through.

Do you think of ambient music in general as being conducive to those sorts of practical applications?

I think music or sound in general serves many practical applications constantly in our lives and is ever present. We are always surrounded in ambient sound that is communicating something to us directly or which we put meaning onto. There is a lot of information out there which we have cast silent ears to, with the assumption that some sounds are more important than others. I definitely think ambient music or drone music can certainly be used to refocus the mind and body, but I also think it’s a highly personal thing so what works for me might not work for the next person.

The project recently swelled to include Haley Fohr of Circuits Des Yeux. How did she become involved and what drew you to her as a collaborator?

Though we both live in Chicago we actually met at the Austin Psych Fest where we were both playing (separately) in May of 2014. I was completely blown away by her Circuit des Yeux performance. Haley also demands your attention in her performances with her commanding voice. We began corresponding then through e-mail, and I reached out to her that following Fall to see if she’d be interested in playing together.

When we did it was completely immediate and obvious that her voice was a very natural addition. I often hear, and others have told me this as well, voices in my music particularly in performance, so inviting Haley to contribute her vocals to my work was a very intentional way to accentuate this abstraction and make it more literal.

How has working with Haley changed Mind Over Mirrors?

I’ve really appreciated her presence and having a break from the one-man band approach, which can be very isolating at times. I also really enjoy or have learned to enjoy that delegation where I’ve said ‘O.K., your instrument is going to fulfill these certain musical needs and I don’t have to worry about fulfilling that same space myself.’ I do feel like it’s enabled me to focus more on textural playing where I can zoom in on a particular sound and explore it, without having to also be consumed with always having to maintain a lead voice. I think through it is also enabling me to envision my work simultaneously through a new solo perspective as well as future ensemble or band-like form.

What can you tell me about the process of making the video? Does its abstractness reflect an essential abstraction in your own work?

Timothy Breen and I have been working together on the intersection of music and visual art since shortly after moving to Chicago. Much like my own music where I aim to activate and propel the static or drone, I think Timothy’s work also follows a similar pathway where he literally sets out to create each frame one at a time as a piece unto itself which you could look at, interpret, enjoy, and then literally animates that through a long sequence of these events that is totally transportive.