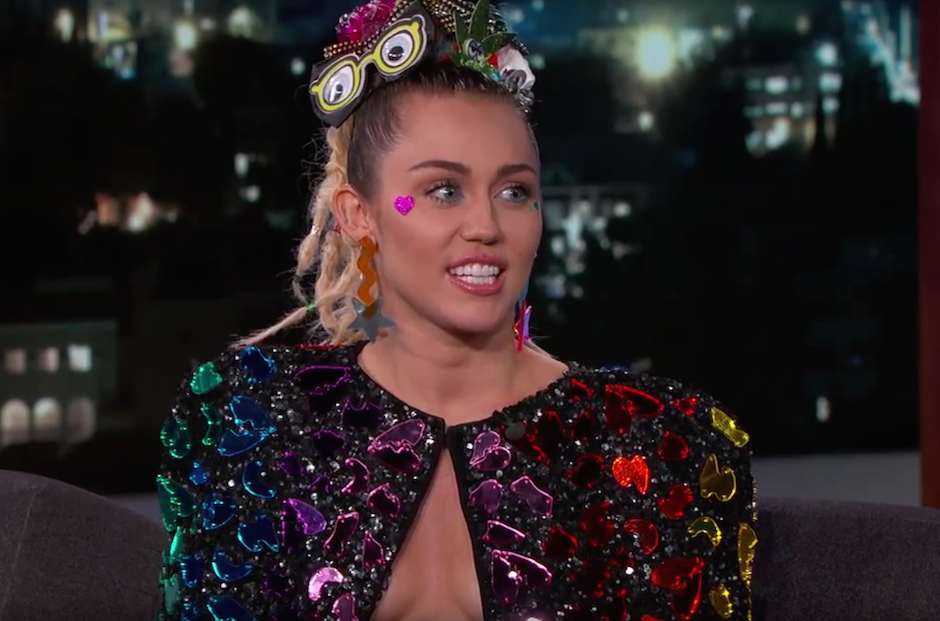 On Sunday August 30, Miley Cyrus will host this years VMAs, and in support she made an extended appearance on last night’s Jimmy Kimmel Live. Kimmel enlisted her for one of his “I Witness” on-the-street interview segments wherein she appeared in disguise to interview people about herself. As you might expect, free of the burden of knowing that they’re talking to Miley herself, the responses aren’t incredibly flattering.

Elsewhere on the show, a bedazzled Cyrus showed up for an interview segment, where conversation settled mostly on her choice of attire (an absurdist cardigan and heart-shaped pasties) and societal standards about toplessness. As for the persistent questions about what her father, Billy Ray, thinks of her affinity for nudity, well he’d rather her “have [her] tits out and be a good person than have a shirt on and be a bitch.”

She also relates an interesting story about running into Paul McCartney at this year’s Rock and Roll Hall of Fame induction ceremony. She says she was only really able to cope with talking to a legend was because she was topless. “I saw him not knowing how to talk to me,” she says. “And I didn’t really know how to talk to Paul McCartney because it made him uncomfortable. It’s a good convo icebreaker. ‘Stop staring at my tits!'”

Miley also refers to herself as a “vegan nudist” and relates a story of going to a nude beach. The VMAs are going to be something else. Watch both videos here.