Savage Hills Ballroom, Trevor Powers’ third album as Youth Lagoon, exists because of coincidence but, more importantly — and tragically — because of death. In the summer of 2013, while in London touring his ambitious and fantastical sophomore effort, Wondrous Bughouse, the quietly affecting Boise, Idaho musician received a phone call that a close friend had drowned in his hometown’s titular river. He interrupted his overseas performance schedule to be with the people he knew and loved for a few months of grieving that changed how he thought about making music. “There was a lot more purpose in what I was trying to say,” he tells SPIN over the phone. “Everything was more intentional, a little more driven by the subconscious.”

The songwriting process was also driven by other things he couldn’t control. For a few months the following year, the then-26-year-old had been talking online via web cam with Bristol-based producer Ali Chant (previous credits include work with M. Ward and Perfume Genius), who had been working with haunting folk-gazer Nick Talbot, a.k.a. Gravenhurst, when he passed away in late 2014. “[Ali] and Nick were really close, and I told him about my friend, and we had this sort of bond where we were both experiencing similar things,” Powers says. “That bled into the record a lot.”

Arresting opener “Officer Telephone” begins Savage Hill Ballroom with a bait-and-switch emotional wallop that was “kicked off” by his and Chant’s respective life events. “Sirens screech that terrible tone,” Powers sings, his signature mewl close and small like a child just awakened from a nightmare. Halfway through the song, the hoary violin undertone and guitar trickle erupts with howling feedback into a cacophony of drums, breaking down into even more (and atonal) static noise. “All I want is for you to come back home,” he says. 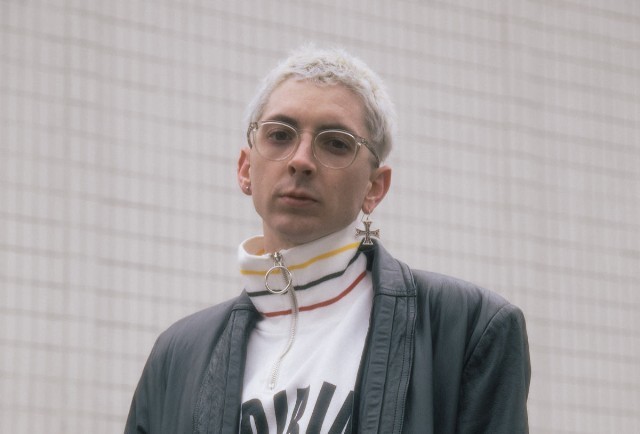 In many ways, this album is about Powers’ return from touring to his home in a self-described “Edward Scissorhands” neighborhood. There, with his wife and their “s—thead” dogs (who bark a riot at the beginning of SPIN‘s conversation with him), Powers learned to mitigate his obsessive-compulsive tendencies by taking better care of himself and his creative process. Following his last album’s traveling circus-like spectrum of instrument-stuffed builds, experiments in vocal expansion, and sweeping synth-pad denouements, Powers felt the need to proceed more step-by-step this time.”I kind of lost touch with what I was trying to communicate, because Wondrous Bughouse was super experimental,” he says. “It was all about trying to achieve sounds that I hadn’t done before.”

Even though he still incorporated techniques he hadn’t learned or used before — like teaching himself electronic programming, recruiting session horn players in the U.K., or flying acquaintances in from Toronto to play bass — he wrote songs one by one with a more cohesive album in mind. “I would focus on a song and then I’d finish it, and work on another song and finish it,” he says. “At the end I viewed everything as a whole, and went back through and tied certain things together. I feel like it created a very unified existence.”

Powers is quick to clarify that all songs aren’t “based directly” on his friend’s death. Rather, the tragedy inspired “a shift in my mentality for this record” toward sounds that expressed what he was actually trying to say as opposed to chosen at “random,” like on Bughouse. Powers’ thematically consistent use of piano on the record was inspired by jazz composer David Axelrod’s 1969 tribute to Renaissance poet William Blake, Songs of Experience. “It’s very groovy, with lots of pianos and crazy things,” says Powers. “That album really pushed me to go back to melody, rather than just random experimentation.”

To maintain such holistic working practices, Powers changed some of his unhealthier habits — the key word being “some.” On the one hand, he “functions at really bizarre hours,” writing through the night and sleeping until 3 p.m., only to wake up and do it again the next day, day after day. The sameness “sort of drove me crazy,” he admits, citing the fittingly titled “Again,” a booming, drum-skinned nod to the depressive monotony of songs like Radiohead’s “Fitter Happier” that features the following lyrics: “And we kiss again / And we sleep again / And computer again / And computer again.”

His obsessive tendencies abated once he started running four miles a day and using a friend’s sensory deprivation tank, where he would float on top of saltwater for at least an hour at a time. “Doing that has made me able to focus,” he says. “It helps me channel bizarre feelings into more of an artistic realm, rather than having them eat me alive.”

That realm might look something like the physical incarnation of the so-called Savage Hills Ballroom, a “golden, grand, exuberant” place that, if you were to Google it before Youth Lagoon announced the LP, wouldn’t have appeared because such a place doesn’t exist. It is, as Powers describes, an illusion — but it’s one that describes his frame of mind while making the album Savage Hills Ballroom. “When the term came to me I had this weird moment where I was like, ‘This is what it’s supposed to be,'” he says. “It’s pretty sh—ty dwelling on things in your life that are not good, and a lot of people are always trying to give off this vibe that we have it all figured out, when we don’t.”