Welcome to SPIN‘s Singles Mix! SPIN staffers have rounded up their favorite, must-hear tracks for your personal playlists. Collecting the finest from yelping Riot Grrrl revivalists, onetime Walkmen, scintillating shoegazers, and more, these are the songs you need to know right now.

All Dogs, “That Kind of Girl” (Salinas Records)
Maryn Jones proved this year that she can write watery ballads with the best of them, but her “That Kind of Girl” serves to remind that she can write compelling kiss-offs, too. All Dogs’ straining alt-rock will feel familiar to fans of their former tourmates Waxahatchee, but Jones pushes beyond just revivalism with self-doubting lyrics about “fucking up” and moving on. — COLIN JOYCE 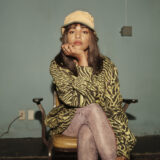 Childbirth, “Nasty Grrl” (Suicide Squeeze)
Childbirth are coming for your arenas. With its sneering vocals and defiant unsanitariness (“We chew loud when we eat! WE NEVER WASH OUR BRAS!”), “Nasty Grrl” won’t become a classic-rock standard anytime soon, but with its hi-hat swing, thunderous guitar chug, and obvious scream-along nature, it could accidentally get the supertrio enlisted in the KISS army if they’re not careful. America would be wise to take heed: If the feminist punks and cock-rockers are united, then we’ll never be divided. —ANDREW UNTERBERGER

Gunplay, “Be Like Me (feat. Rick Ross)” (Maybach Music/Def Jam)
Miami scream-rap destructionist Gunplay sparked mosh pits in 2013 at a noise and metal show headlined by Napalm Death and Wolf Eyes, a calamitous context that helps for understanding his latest Rick Ross-featuring single. The speaker-shredding bass blasts are de rigueur for Maybach Music’s boisterous monochromatics, but Gunplay spits sinister Stand By Me bars with a bug-eyed intensity and vocal grit that puts him in line with all those power-electronic acts he once shared a bill with. “Wanna see a dead body?” he snarls. Yeah, pretty sure that’s what Prurient is saying under all that distortion, too. — C.J.

Hamilton Leithauser & Paul Maroon, “Sweet Irene” (Self-Released)
The on-hiatus Walkmen live on through its former frontman and guitarist, who have remained steadfast cohorts on both Hamilton Leithauser‘s jubilant Black Hours and this gentle new cut, which is slated to appear on the duo’s forthcoming joint release in August. Joining their voices in mellifluous harmony, the boys rely only on minimal, chord-climbing piano keys, which slowly tap-tap-tap their way in your head and threaten to swap out a single tear. — RACHEL BRODSKY

Julia Holter, “Feel You” (Domino)
Los Angeles-based experimentalist Julia Holter has edged ever closer to the pillowy embrace of chamber pop since her breakthrough 2011 release, Tragedy, and latest single, “Feel You.” Wheedling strings and prickly harpsichord call to mind the bristles and thistles of Van Morrison’s Astral Weeks, but Holter’s shaggy-dog structures and flickering vocalizations are a fair bit more comforting — something more like cuddling up to the furry friend that pops up in the track’s video. — C.J.

Klyne, “Entropy” (Aesop)
A woozy, warped deep-house respite — it’s that dancehall 4 a.m. slow burn you need to collect your breath — the new Klyne single does to steel drums what Clean Bandit did to ’90s soul divas. “Entropy” happily claims its predecessors, as it also slowly turns its back on dance’s past and throws open the doors to a new tomorrow. — BRENNAN CARLEY

M.I.A., “Swords” (Interscope)
M.I.A. marks her return with a violent, piercing clatter of blades — almost as if she’s been lying in wait to ambush the listener. The metallic clangs that cut through her affected singing and wonky, drum-heavy beat are abrasive, but that’s kind of the idea. The Sri Lankan rapper has never lacked confidence, and “Swords” demonstrates that she’s still willing to unsheathe her pointier instincts. — JAMES GREBEY

Protomartyr, “Why Does it Shake?” (Hardly Art)
Discordant guitar, ominously shuffling drums, unpredictable feedback attacks, “False happiness is on the rise / See the victims pile high / In a room without a roof.” Good to have you back, Protomartyr — the sun was starting to get on our nerves, anyway. — A.U.

Swervedriver, “Winter Depths” (Adult Swim)
Just months after their long-awaited fifth album, the U.K. shoegazers are back once again with a fuzzed-out track for the Adult Swim Singles Program. Its frigid subject matter and icy piano riffs pull the track in a gloomy direction, but on the whole, the medium-tempo rocker is more sonic bearhug than cold shoulder — a loose and hazy jam that should pair surprisingly well with the Cartoon Network late-night block. — TREE PALMEDO

Youth Lagoon, “The Knower” (Fat Possum)
Idaho’s Trevor Powers creeps out of his self-imposed hibernation with trepidation on this trumpet-tinged single, which will appear on his third effort, Savage Hills Ballroom (out on September 25). Once exposed, though, his cooing, curling vocals grow more more amplified. They have to, in order to keep up with the building cacophony of shuddering synths, tittering cymbals, and braying brass. You’ll be glad he spoke up. — R.B.